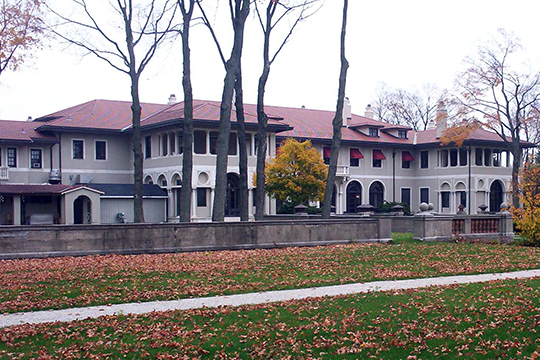 Lake Forest was founded in 1851, on the shores of Lake Michigan. The earliest part of Lake Forest developed as a classic railroad suburb beginning in the 1850s. It is one of the stops on the north commuter line of the Chicago and North Western Railroad Company, from Chicago, including Wilmette, Winnetka, Indian Hill, Hubbard Woods, Glencoe, Ravinia, Highland Park, Lake Forest and Lake Bluff. These are the principal suburbs forming the "North Shore" of Chicago.

Almerin Hotchkiss, an early landscape designer, laid out this original plat of Lake Forest in 1857. Hotchkiss, who was a proponent of the "Romantic and Picturesque" design movement, designed Lake Forest's first streets in a curvilinear pattern that follows the contours of the land, including the many ravines and other topographical features. Hotchkiss came from St. Louis to design early Lake Forest. Hotchkiss was part of the cemetery design movement that grew out of the cholera epidemics in the 1850s. He had been active in designing romantic and picturesque cemeteries in Brooklyn, Massachusetts, as well as Rock Island, Illinois, and Bellefontaine in St. Louis. Hotchkiss designed Lake Forest at the same time as Olmstead and Vaux designed the well-known suburb, Riverside, Illinois, in 1869. Both Lake Forest and Riverside have been cited as early and significant romantic and picturesque landscape designs. A part of east Lake Forest, from Market Square and the business district on Western Avenue east to Lake Michigan, part of the Lake Forest Historic District, is noted for its elegant homes, dating back to the 1860s, as well as its romantic and picturesque suburban plan designed by Hotchkiss.