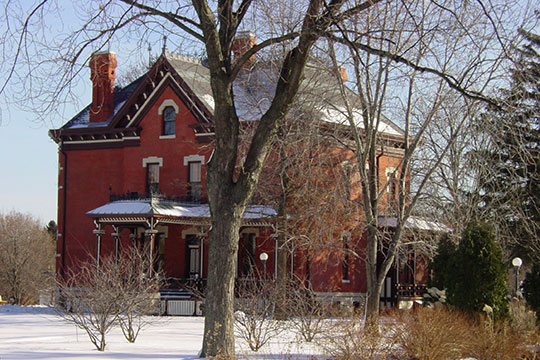 Naperville is a thriving, suburban community located 30 miles west of Chicago. The landscape of steel and glass centers built for commerce and technology-based industries, meandering neighborhoods, and a vibrant downtown shopping district are in stark contrast to the broad expanse of level prairie and thick forests that greeted Joseph Naper and thirteen families upon their arrival in 1831. Escaping the landlocked counties of the east coast, these families came to Illinois to build a community for themselves and their children. The story of Naperville's growth from the original 80 acres surveyed, platted, and registered by Joseph Naper with the State of Illinois in 1842 to a collection of neighborhoods with a population of more than 140,000, is noteworthy.

Naperville remained a small rural-based town from 1831-1864. Most homes were constructed of wood and utilized simple, vernacular styles of construction. With the coming of the railroad in 1864 and consequently the relocation of North Western (now North Central) College to the city in 1871 Naperville grew and matured as a town. New construction in high Victorian styles such as Stick, Queen Anne, and Italianate became the standard, particularly on the east side of town. Between 1870 and 1900 several pioneer industries grew and prospered employing a large number of Napervillians. Stone quarries, brick and tile works helped re-build Chicago and local breweries and furniture manufacturers delivered their products to local, regional and national consumers.

The only industry to survive both World Wars and become the town's number one employer was the Kroehler Manufacturing Company, which produced furniture. GI's returning home created a housing shortage that local lumbermen, contractors, and builders quickly addressed. The first homes constructed were pre-fabricated or kit homes built on in-fill lots between older homes. During the building boom of the 1960s, 70s and 80s influential builders and subdividers like Harold Moser and the Shiffler Brothers carved out modern, efficiently planned communities with schools, parks and retail amenities. Neighborhoods such as the Highlands, Maplebrook, and Green Acres showcased modern new home styles such as the split-level and ranch, as well as unique, custom-designed homes by noted architect Don Tosi.