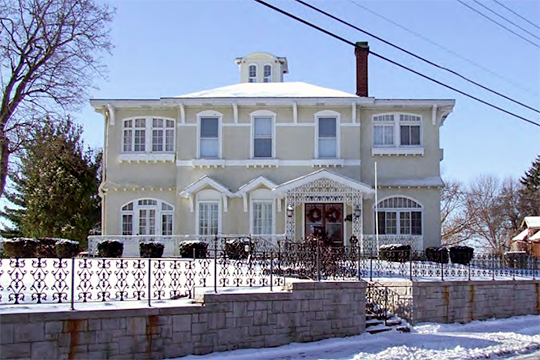 The Seminary Hill Residential Historic District was listed on the National Register of Historic Places in 2015. Portions of the content of this web page were adapted from a copy of the original nomination document. [‡]

The Seminary Hill Residential Historic District is a bluff front enclave that encircles Madison Park on three sides and is located north of the Dubuque downtown proper. Its historical name derives from its proximity to the German Theological Seminary that is located immediately to the south (West 17th and Heeb streets, a part of the Jackson Park National Register of Historic Places residential district). Clarke Street, which forms the bluff top "backbone" of the district, was first called Seminary Street. The Jackson Park Historic District is adjacent to it to the immediate south. High limestone bluffs form the park perimeter to the south. Substantial pedestrian stairs, first built of wood and later concrete, surmounted those bluffs to reach both the park and nearby homes. The district topography is downgrade to the east along the ascension of Clarke Street from Heeb Street, and to the south along Madison Street. The district is defined from the standpoint of both historic buildings and a consistent plateau top elevation.

The district assumes the form of a cluster of primarily early date Italianate style single-family homes. These front onto a juncture of one angled principal cross street (Clarke formerly Seminary Street) with three cross streets. Heeb Street is the eastern-most connector. North Main is self-defined by the bluffs so aligns with but does not link directly to the rest of Main Street. It borders Madison Park along its west side and then continues north beyond Clarke Street. Finally Madison Street ascends a steep incline to form the west part of the district and to terminate at Clarke Street. The result is an irregular district with the majority of houses being on Clarke Street. Nearly half of the district buildings are of brick construction.

The historic district's focal point is the southern termination of North Main Street. That street, now Madison Park, abruptly ends at the top of a limestone bluff. The district more broadly encompasses the eastern and southern end of Seminary Hill, and its steeply pitched approaches along Madison and Clarke Drives. Clarke Drive follows the crest of Seminary Hill westward but the district ends once the higher proportion of early house styles and brick houses declines. The district has suffered minimal later-date infilling just a few of the small number of non-contributing houses involve cases of recent construction.

The Italianate style, either in a gable front side hall or an L-plan side hall layout, predominates within the district's styles and there are a good number of Italian Villa house designs. As is the case with other bluff top residential districts, these originally deforested visually prominent settings lent themselves to the picturesque house design. Three Second Empire designs, of secondary importance are on Clarke Street. These examples include a cottage example, a single-story row house design and a large-scale residence. The first and last named mark the east and west district boundary on Clarke Street.

As is the case with all city residential districts, vernacular architecture comprises a strong presence with a half dozen examples. These are single family examples, which distinguishes them from non-bluff top vernacular ranges and as is the case with the Italianate examples, these are mostly gable front or gable front and wing designs, the majority being houses but some good cottage examples being present.

The district architecture represents Mid-19th Century and Late Victorian Italian Villa and Italianate architecture, with a small number of Second Empire, Queen Anne and Classical Revival stylistic examples. Primarily of brick construction, the district combines a prominent bluff top setting and a central Madison Park (1919) focal point. The district period of significance is 1855-1919, the period during which the district was developed and completed.

During the early development of the city, wealthy residents could afford to defy the difficulties of surmounting the steep bluff fronts and the bluff fronts were the preferred picturesque building sites for Italianate style grand residences, built of wood or brick. Seminary Hill was particularly distinctive because it had an isolated north-end location and it loomed upwards above the city's first cemetery (Jackson Park). Unlike other bluff-front neighborhoods, Seminary Hill never enjoyed streetcar access, nor did it develop its own inclined railway as did Fenelon Place and the neighborhood above West 11th Street, these being Dubuque's other prominent bluff-top neighborhoods. Development proceeded regardless. In lieu of rails Seminary Hill received extensive public stairways to aid residents and tourists in ascending the picturesque bluffs. Following World War I Seminary Hill played a leading role in the development of the city's growing parks system with the establishment of Madison Park and concrete stairs replaced the wooden ones.

Seminary Street (now Clarke Street) was an important east/west farm to market road but its east end, terminating as Heeb Street at West 17th Street, presented a very steep and sustained descent into the city. Seminary Hill and the related street of the same name derive their names from the Dubuque Female College (1954) that is located at the southeast corner of the district (and hill) (addressed as 75 West 17th Street) and located on the northwest corner of West 17th and Heeb/Iowa streets. The Byzantine-style brick edifice successively served as the city's first high school, an Episcopal Church seminary, the German Theological Seminary (1871-1907) and then as the Dubuque Immaculate Conception Academy. The building is a contributing building in the Jackson Park Residential Historic District, that abuts along the south side of this district. As noted the seminary building provided the title for this district.

The Dubuque City Council instructed the City Engineer on September 1, 1856, to establish a formal grade for Seminary Street and petitioners urged that "Seminary Street be improved so as to put same in a good condition for travel." Another less steep approach to reach Seminary Street from the south, was also promoted at this time. It wasn't until June 16, 1857 that the Council finally asked the City Engineer to prepare a survey and plat for the new Madison Street. (Dubuque City Council Minutes).

The Dubuque Herald observed in early September 1867 "No portion of the city is improving faster than Seminary Hill. It is fast settling up with an honest laboring population, who are constantly improving it. Almost every body on the hill has been making improvements to some extent." The building up of the north side of Seminary, to the west of North Main, was proceeding in a building frenzy that would later be typical of tract housing developments. The Herald enumerated five new houses being built and several others that were being rebuilt. Herman Sauer was lauded for his "nearly new" six-room brick house on the hill complete with a greenhouse and vineyard. The Herald added, "This place commands a fine view of the river and city and is a very desirable location."

This earliest overview of the area attests to the solid up-building of all existing streets. Madison Street, if fully linked to West 17th, has houses along its west side. The image underscores the striking difference in relative elevation between the upper and lower reaches of the survey area. Seminary (Clarke) is already well developed within the range of the district. North Main does not continue north of Seminary.

A correlation of the 1873-74 city directory entries for the district identifies 27 residences along Seminary and Madison streets. Six residences were along the south side of Seminary Street, west of Madison. Four homes were on the west side of Madison on its south end above West 17th Street.

Seminary Hill was considered as the location for an inclined passenger railway when the other railways at 4th and 11th streets were being planned. It never gained its own elevator because the investment wasn't deemed profitable.

Merchant George D. Wood built a prominent Italian Villa style brick house on the brow of Seminary Hill and Wood platted the north side of that street as previously noted. Wood, however, was a large man and grew tired of the uphill trek home. He sold the house to J. V. Rider. Rider enlarged the house during his lengthy occupancy. The mansion long dominated the south end of North Main, below Seminary/Clarke Drive. Set atop a steep sheer wall of stone (the result of quarrying), his house occupied what was termed by some residents "one of the most beautiful in the city." Rider retired to California and gave his house to the city for use as a public park in August 1914. Rider also specified the name for the park although it was at least briefly termed "Hill Crest Park." His specific desire was that children could enjoy his spectacular vista. It was also his hope that the house itself could be incorporated into the park facilities. The park first opened in mid-August 1915. This was not deemed feasible. In mid-1918 Rider agreed with the Park Board that the house had to be removed. Demolition took place in January 1919. An open pavilion was built and the grounds landscaped. A concrete stairway leading up to the park from West 17th Street had been built in 1918. Seminary Hill residents raised funds to erect a 60' flagpole (reflective of post-war patriotism). The Herald noted, "The flag hanging from this pole can be seen from the greater part of the city." Formal dedication of the park took place on June 26, 1919. The requisite speeches, a two-hour band concert by John Jenny's Municipal Band, and the raising of the flag for the first time, all filled the evening program. The Park Board hoped that all the city residents would use the park and the board was particularly proud of the artistic stairway. The stucco and tile pavilion was considered a model for use in any additional small parks that the city might create.