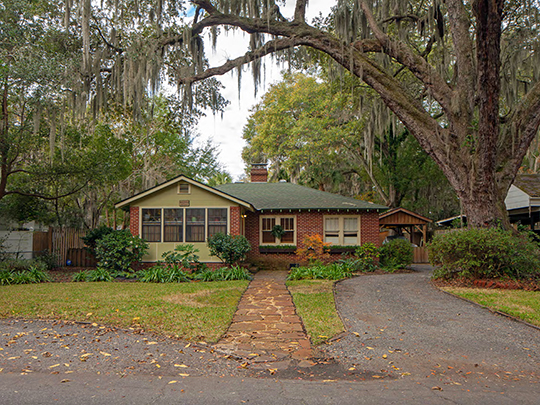 The Windsor Park Historic District was listed on the National Register of Historic Places in 2013. Portions of the content on this web page were adapted from a copy of the original nomination document. [‡]

The Windsor Park Historic District is a suburban residential subdivision that developed between the 1920s and early 1960s about 1/2 mile from downtown Brunswick. The 85-acre development capitalized on the prospects of suburban living and a country-club lifestyle due to its location outside the city's urban core and adjacent to a major city park overlooking marshland. Although formally platted in 1927 and laid out in 1929, most housing dates to after the late 1930s due to the effects of the Great Depression. A few houses were built in the early 1920s when a golf course was located on the property. Windsor Park features curvilinear streets, large wooded lots of varying shapes and sizes, a central oval-shaped park, a small salt-water pond, and opens onto an adjacent public park (not part of the district). The earliest houses are located in the northern part of the district between Holly and Gloucester streets. The subdivision contains 178 houses including Ranch Houses, American Small Houses, Bungalows, English Cottages, Split Levels and two-story houses. The Colonial Revival and Craftsman styles predominate, although other architectural styles including English Vernacular Revival and Spanish Colonial Revival are present. Most of the houses are wood framed with brick veneer or weather-board siding. Landscaping is informal with open lawns and large oak and palm trees. With a few exceptions, streets in Windsor Park are curbed. There are no sidewalks. About 1/4th of the houses have integral or attached carports/garages. There are very few non-contributing properties in the district.

The plan for Windsor Park was designed by civil engineer Arthur Owen Wilson of Huntsville, Alabama. The curvilinear streets and variously shaped lots employed in the design are characteristic of picturesque subdivisions of the period.

Located at the center of the District is Windsor Park, a large, flat expanse of lawn that is studded with many mature oaks (draped with Spanish moss), palm trees and crepe myrtle trees. Azalea bushes surround a small, tile-floored terrace.

Windsor Park features one of the best collections of Depression era, post World War II, and mid-20th century domestic architecture in Brunswick. The earliest houses within the District were constructed at 1404 and 1411 Sycamore Street, in 1905 and 1911. These are not part of the initial vision for the development, and more closely resemble homes in nearby Town Commons.

The Colonial Revival style is the most common style in Windsor Park and is represented throughout the district.