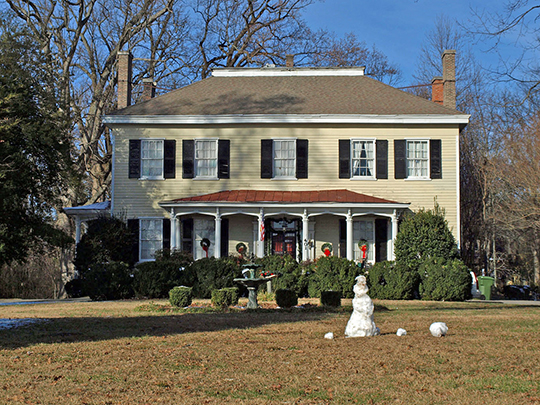 Huntsville was settled in 1805 by John Hunt, who found the "Big Spring" (Tennessee River) and lived there until 1808. During his temporary absence in Tennessee, to bring his family to Madison County, the Government land in the vicinity was sold. Martin Beatty purchased 1,000 acres including the big spring for $1,000. Freeman Jones bought 450 acres, William Campbell 640 acres, Gideon Harrison 200 acres, Daniel Harrison 200 acres, and Henry L. Sheffey 10,000 acres. Huntsville and Madison County were the first organized white settlement in Alabama, north of the Tennessee River. The Huntsville meridian was established in 1809, from the State line to the river. In 1809 William Dickson, Edward Ward, Louis Winston, Alexander Gilbreath and Peter Perkins, were appointed commissioners to select a site for the county seat. At this time Martin Beatty relinquished his title to the 1,000 acres of land at Huntsville, exchanging it for lands elsewhere. The land was thereupon resold and Leroy Pope bought it for $23 an acre. He set aside a plot just above the big spring for the courthouse square. At the suggestion of Leroy Pope, the new town was named Twickenham after the English home of Alexander Pope. The name was changed to Huntsville in honor of its first settler, November 25, 1811. As first laid out, the town contained about 60 acres, in blocks of 2 acres each subdivided into 4 lots. It was first surveyed by John W. Leake, and later by Hunter Peel, who also built the waterworks in 1823. The big spring furnishes both the water and the power to lift and circulate it.

Among the earliest settlers were the Acklen, Stephen Neal, William McBroom, Wm. Winston, the Harrison, Elisha B. Clarke, Alexander Campbell, Wm. Harris, Francis Newman, Fleming Ward, Daniel and Jere Murphy, Nicholas Sheflield, Adam Cross, Thornton Cook, and Wm. Steilman families. The old settlers' log cabins were scattered irregularly from Pope's Hill, down to Madison Street. John Brown erected the first two stores on the square. James Crump built the next house. Dr. David Moore came in 1809 and built a gristmill and cotton gin, the first in the town. The convention to organize the State of Alabama, met in Huntsville in July, 1819, and the first legislature of the new State also met there In November of the same year.