Photo: Bulloch Hall, ca. 1839, Bulloch Avenue, Roswell, GA. In this home, Theodore Roosevelt, Sr. and Martha Bulloch, the parents of 26th US President, Theodore Roosevelt, were married in December of 1853. Photographed by User:Keith Simon (own work), 2007, [cc0-by-1.0 (creativecommons.org/publicdomain/zero/1.0/deed.en], via Wikimedia Commons, accessed May, 2011. 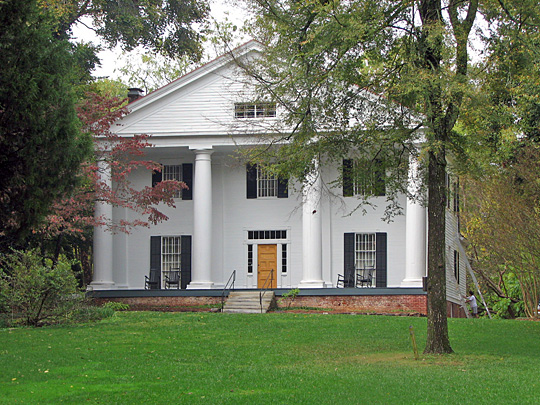 The town is named for Roswell King who established a cotton plantation here in 1838. The following year he created the Roswell Manufacturing Company. King built cottages for his workers and sold parcels of land to wealthy friends. During the Civil War the Union Army destroyed the cotton mill, sparing the church and most of the homes. After the war, many families who had fled, returned to their homes, the cotton mill was rebuilt, and cotton resumed as the primary engine of Roswell's economy. Economic growth and population stagnated from the 1930s depression until the completion of Highway 400 to Atlanta. By the beginning of the 21st century, Roswell had evolved into a diverse, residential suburban city. [History of Roswell, Georgia, www.roswell.org, accessed March, 2012]

Roswell was incorporated in 1854.