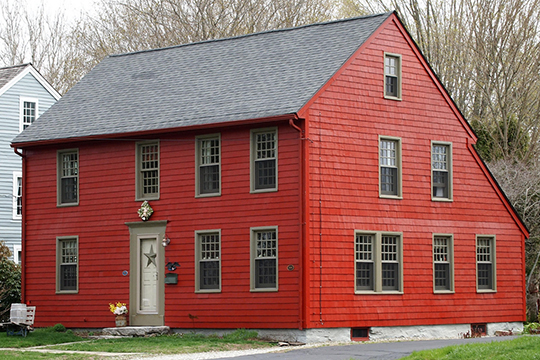 The Norwichtown Historic District was listed on the National Register of Historic Places in 1973. Portions of the content on this web page were adapted from a copy of the original nomination document. [‡]

The Norwichtown Historic District, established in the City of Norwich in 1967, is made up of the original Green and has irregular boundaries on the radiating streets. The Green is a triangular area surrounded by closely spaced structures, most of which were built in the 18th century. Two of the outstanding buildings here are Joseph Carpenter's Silversmith's Shop and Dr. Daniel Lathrop's School, standing together on the north side of the Green.

The Silversmith's Shop (National Register 10/6/1970), is a small gambrel-roofed building of frame construction, built by Joseph Carpenter in 1772-1774. Its unusual feature is the wooden shutters which meet from top and bottom rather than from side to side. Just to the east is the school, erected through the efforts of Dr. Daniel Lathrop, who left a legacy of five hundred pounds for an endowed free grammar school, in 1782. Built the following year, it is believed to be one of the earliest brick school houses still standing in the State. It is of the same scale as the Silversmith's Shop next door, both being of one and a half stories and having gambrel roofs.

Along East Town Street and Huntington Lane are some of the most handsome houses in the Norwichtown Historic District. The General Jedediah Huntington House was built in 1765 for one of the more illustrious military men of the Revolutionary Period. (National Register 10/6/1970). A large Georgian house, it is of twin-chimney, center hallway form with gambrel roof and overhanging gable ends at 3rd floor level. The nine-window facade displays lintels at window heads cut to resemble brick, with a keystone arch. Projecting center bay contains a paneled door, framed by sidelights and reeded pilasters. Above the door is a semi-elliptical fanlight in spider web pattern. The outstanding feature inside is the fine mahogany staircase which has balusters of alternating twisted rope patterns. At 16 Huntington Lane stands the Bradford-Huntington House (National Register 10/6/1970). One of the most interesting old homes to survive, this is one of the three remaining structures built by a founder. One part of the house dates from before 1691, for Simon Huntington purchased from either Thomas or John Bradford the land and "new dwelling house" in 1691. There were additions made in 1719 when Simon's son Joshua obtained the homestead. There are many early features remaining: the heavy, plain box cornice at eaves line, the wide overhang at gable ends, and the small window above entry. There are two sections; that to the rear is essentially another house, being also 2-1/2 stories. It was probably this part that was built by Joshua's son, General Jabez Huntington, a wealthy West Indian trader who came into possession of the property in 1745. The house has been well-preserved and is especially interesting for its growth pattern showing the changes within one family.

There are many and varied structures in the Norwichtown Historic District. Washington Street, for example, the eastern boundary, has many fine houses built before 1800, one very new house, the East District School, 1789 (National Register 10/28/70), and the Leffingwell Inn, 1675 (National Register 1/29/70).

The first settlement in Norwich was in 1660 and was located in the area known as Norwichtown. Although three hundred years have passed, the pattern and features of that settlement are still apparent in the great number of early structures remaining. Some have been altered, reflecting their varied uses. The Norwichtown Historic District includes that area of first settlement, which is the Green and surrounding streets.

Norwich was founded by a group of about 35 men from Saybrook who petitioned the General Court at Hartford in May, 1659, for permission to make settlement here. Nine square mile were deeded to them by the Mohegan Encas and his sons, Owaneco and Attawanhood in June, 1659. In the spring of 1660 the Reverend James Fitch moved from Saybrook to Norwich with the principal part of his congregation.

The "Town Plot" was laid out along the Yantic River. Home lots were several acres and included pasture land. Near the center of the Plot was an open space for public buildings; this area was soon known as Meetinghouse Plain or the Green. Somewhat later, in 1729, the Town Proprietors voted that Meetinghouse Plain "shall be and remain to be...for publick Use for the whole Town forever henceforth without alteration."[1] The church had its place here and has alternately stood on the Green and on the cliff behind (Meetinghouse Rocks). The second and third churches were erected on this high point which also served as a watch tower against Indian raids. Behind the church stood the powder house, a wooden structure which was set on fire and exploded during the Revolution. The fourth church was built at the northwest corner of the Green in 1770, and the fifth, the present building, in the same place when the fourth burned in 1801. Accompanying the church on the Green were the courthouse, shops, residences, and more than one tavern.

Caulkins, Frances M. History of Norwich. Published by the author, 1866.