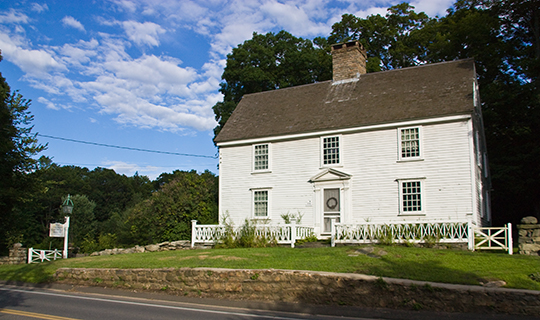 The Griswold House (171 Boston Street) was listed on the National Register of Historic Places in 1975. Portions of the content of this web page were adapted from a copy of the original nomination document. [‡]

The 18th century Thomas Griswold House is located, very suitably, on the south side of Boston Street east of the historic Guilford Green. Not far from the seventeenth century Hyland-Wildman House, it is another fine example of colonial New England architecture.

Set back from the road upon a small rise, the Griswold House is a two and a half story clapboard structure, three bays wide. A central chimney, probably once stone, is now covered with cement and sits on the rear slope of the salt-box roof. The lean-to forming the salt-box was, likely, an addition and extends beyond the east side of the house.

The elegant Georgian style entry is characteristically designed with a multi-panelled door, surrounded by pilasters and topped by a pediment. A small white wood fence projects from the facade serving to frame the entry such that it is made the focal point of the facade. The whole site is an imposing one, for the house is of a large scale and is set off by a few surrounding trees. Being away from the road and at a somewhat greater height, the Griswold House lends a sense of stature to Boston Road.

The Griswold's are an old established Guilford family, the first of whom was Thomas Griswold who moved there from Wethersfield in 1695. He became the village blacksmith and married Sarah Bradley in 1697. In 1708 they had a son, Thomas Griswold II who grew up in Guilford, and it seems likely that it was he that built the Griswold House on Boston Street for his parents lived in an area known as Nut Plains. The house near the Green was past down from generation to generation of Griswold family members until it was sold in 1958 to the Guilford Keeping Society (the town historical society).

The house is a fine example of New Haven colonial architecture and is well-preserved by the members of the Guilford Keeping Society who use it for their headquarters. Since it is close to the Hyland-Wildman House and to the Guilford Green, it is of critical importance to the colonial fabric and architectural integrity of the town.