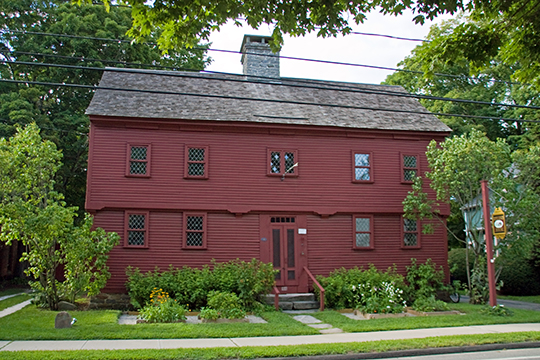 The Hyland-Wildman House (84 Boston Street) was listed on the National Register of Historic Places in 1976. Portions of the content of this web page were adapted from a copy of the original nomination document. [‡]

The Hyland-Wildman House is located about 1/8 of a mile east of the town center on Boston Street in Guilford, Connecticut. Built in 1660, the house was originally a two story, two-room plan residence with a central stone chimney. The main facade is divided into five bays with double hung sash windows having diagonal muntins. This plank constructed house is clapboard sided and the "salt box" gable roof is sheathed in wood shingles.

Treatment of the overhang in the main facade includes use of a chamfered girt and evidence of the front and sides of the first floor, but does not continue through the lean-to, suggesting that the lean-to is not contemporaneous with the main house block. The hewn ends of the front posts adds decorative embellishment to the facade of the house. According to Kelly (Early Domestic Architecture of Connecticut, 1924, page 63), the chamfered girts of the Hyland-Wildman House are the single use of this treatment in a 17th century Connecticut house.

The lean-to was added to the house probably around 1720 to separate the living space. It provides enough space for a kitchen, two bedrooms and a pantry.

The Hyland-Wildman house was restored in 1900 by the Dorothy Whitfield Association of Guilford, Connecticut. It is now open as an historic house museum during the summer months.

It is not known exactly from where George Hyland, the builder, emigrated, but by 1660 he was living in a home which he had constructed in Guilford, Connecticut. When he died in 1692, he left the house and his farm to his wife, Hannah and his four daughters. As Hannah herself approached old age, the estate was divided among her four sons-in-law and four years after the death of Hannah Hyland, the house was transferred to Isaac Parmelee and his wife, Elizabeth Hyland. In 1719 the house was purchased by his son, Ebenezer Parmelee, who presumably had come back to Guilford from New York where he had been a clockmaker's apprentice for a number of years. Owner of the house and property is not known after 1777 when Ebenezer Parmelee died. However, by the end of the 19th century, the property was in the possession of J.T. Wildman. It was Mr. Wildman who transferred ownership to the Dorothy Whitfield Society. The Hyland-Wildman House is an important building in the evolution of the 17th century house in Connecticut. Because of its early construction date and the application of decorative chamfered girts (cited by Kelly as the earliest use of decorative exterior treatment other than hewn posts), the Hyland-Wildman House is a landmark building in the history of domestic architecture in Connecticut. The house gains additional significance in the history of preservation, since it is also the subject of an extensive and carefully executed restoration in the early years of the 20th century. The Hyland-Wildman House was one of the first houses in Connecticut to be restored and specifically displayed for architectural significance, as opposed to the more common rationale for preservation means associated with historical events or famous persons.