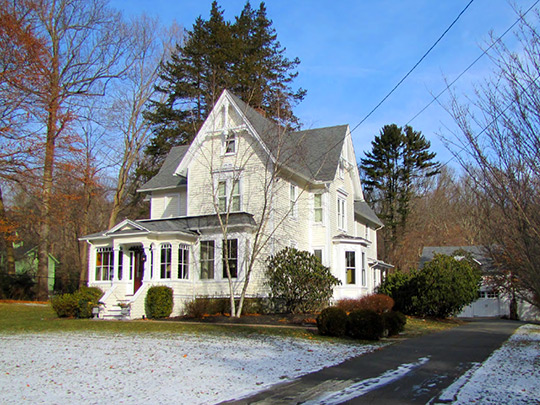 The Ivoryton Historic District was listed on the National Register of Historic Places in 2014. Portions of the content on this web page were adapted from a copy of the original nomination document. [‡]

Ivoryton is one of three villages within the Town of Essex, a 12-square-mile town located in the southernmost portion of the Connecticut River Valley on the river's west bank, seven miles from the mouth where it empties into the Long Island Sound. The geography of the region, known as the Eastern Coastal Slope, is defined by low hills, hardwood forestation, and sandy coastal beaches with many natural harbors and inlets. The intact underlying bedrock accounts for the relatively uniform landscape and its rich alluvial soils. The climate is relatively mild along the shoreline due to the protection of Long Island, which forms a natural break against severe weather and harsh winds. The fertile soil and coastal topography inform much of the settlement patterns in both the Native American and later Colonial periods. The Falls River runs through Ivoryton, and various dams provide flooding and create ponds throughout the region. Ivoryton's terrain is rugged compared with the other villages; the Falls River cuts ridges on three sides of the village, making grazing or agriculture difficult to sustain, which is likely why Ivoryton was the last of the three to be settled and developed.

The Ivoryton historic district captures the village as a nineteenth-century company town complete with factory complexes, civic core, upper-management neighborhood, and extensive company-owned housing stock that is most heavily concentrated on the ridges to the north and south of the two factory sites. The boundaries of the district encapsulates almost the entire length of Main Street from Bushy Hill Road on the west to very near the border of Centerbrook on the east and includes the earliest extant buildings that predate the mid-nineteenth century industrial village development.

The district is predominantly Victorian in character, though building types range dramatically from very simple vernacular buildings to high-style Italianate and Queen Anne buildings, some with extensive decorative scrollwork. Even some of the most modest buildings were adorned with some degree of decorative spindle-work. Many of buildings have undergone additions as well as subtle alterations in the late twentieth century, when suburbanization and the desire for larger spaces and modern conveniences became a necessity, especially given the diminutive size of some of the original houses. These alterations are reflected in numerous accretions that illustrate multiple time periods, but have been sensitively considered, keeping the period character of the streetscapes remarkably intact. Many buildings also reflect emerging stylistic trends that altered their original expressions-the inclusion of comparative historic images in the figures are used to illustrate this often nuanced evolution.

The earliest buildings in the district date to the eighteenth and early nineteenth centuries and are primarily located at the east end of the district. Period elements common to most of the early buildings are mortared, cut-stone foundations; post-and-beam structural systems; clapboard siding; double-hung sash windows; and gabled roofs. The chimney-stacks, typically centrally placed during this period, vary in placement, possibly due to changes over time. A few buildings, roughly classified as New England Colonial, exhibit late Georgian facades

The initial settlements at the mouth of the Connecticut River were fur trading posts and defensive structures. The first European to travel in the region was the Dutch explorer Adriaen Block, who explored Long Island Sound in a series of voyages beginning in 1612. The Dutch attempted a fort at modern Saybrook Point, and built one in Hartford in the 1633. Shortly thereafter, British colonists from the Plymouth Bay Colony and Massachusetts Bay Colony made their way into the Connecticut Valley and began to create settlements at Windsor, Wethersfield, and Hartford. Saybrook, called "ZeeBrooke" by the Dutch, was named for patent-holders Lord Say and Sele and Lord Brooke and encompassed modern-day Essex. The Saybrook Colony became a part of the greater Connecticut colony in the 1644, and Connecticut itself became an independent colony in 1662 when the British King Charles II granted a charter. By 1667, there were seven coastal towns in Eastern Connecticut, all settled by the English.