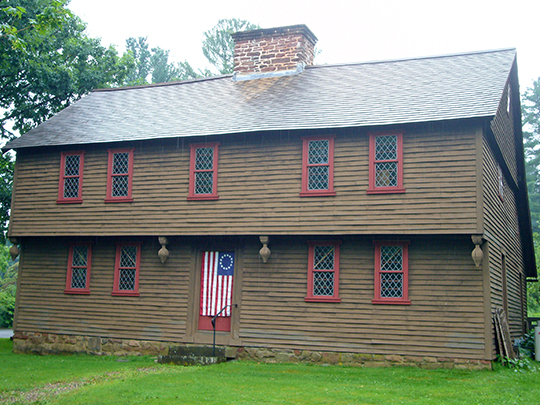 The Stanley-Whitman House (designated a National Historic Landmark in 1960) is located at 37 High Street in Farmington, and was listed on the National Register of Historic Places in 1966. Portions of the content on this web page were adapted from a copy of a 1974 nomination document. [‡]

Constructed around 1660, The Stanley-Whitman House in Farmington, Connecticut is the oldest house in that community, and is one of the earliest frame structures left in New England. Age alone, however, is not the reason for the esteem in which we hold this handsome house. Rather it is because the Stanley-Whitman House is a composition of architectural elements which together present us with an excellent example of the English-medieval building techniques of seventeenth-century New England.

The overhanging upper storey, which we associate so quickly with early New England houses, derives from earlier usage in the British Isles, a feature used there in an attempt to squeeze as much living space as possible out of the narrow medieval streets of Europe. Two types of overhang developed here: that type in which a post running from sill to plate was hewn out at the floor level of the upper storey thereby creating a shallow step-back, and that type in which two separate framing members created the two difference planes, i.e. a one-story post from the sill to the girt, and another, in a forward plane, from girt to plate. The former type, sometimes called a false overhang (e.g. The Buttolph-Williams House, Wethersfield, Connecticut) was only able to have hewn a portion of the rather massive post, and thereby was generally limited to an overhang of only a few inches. The so-called true overhang type that we find at The Stanley-Whitman House, on the other hand, creates a much bolder effect through the manipulation of separate timber members, and overhangs a good deal more. The west front of the Stanley-Whitman House has an overhang of some eighteen inches.

The drops which we see at that front are carved from those portions of the upper floor posts which, project beneath the floor girt. These, here, are unusually handsome,and reveal a sophisticated approach to the articulation of separate architectural functions through the structural members. Very few original carved-drop houses remain to us today.

The narrow casement windows in this house are not original, but are certainly authentic, the product of a careful restoration in 1934 by the Connecticut authority, J. Frederick Kelly. Sash windows, introduced into England from Holland during the seventeenth century, had not yet made their way to the colonies, and the vertical-mullioned, diamond-paned, leaded casement type with transoms is altogether typical of this period and for centuries before.

That part of the chimney which remains below the gable also reveals a medieval building habit. Rather than joining the flat fieldstones with lime mortar as is done above the gable for the flat sandstones, they are held together by a mixture of clay and straw, a technique long-used in England. The upper part of the chimney was rebuilt about 1700 when the lean-to was added, and used lime mortar at a time when bricks and lime mortar were becoming generally available.

The exterior walls are a mixture of original and modern, riven (split rather than sawed) oak weatherboards, attached with hand-forged wrought iron nails.

The main house (two rooms facing a center chimney) was a 2-1/2-story building approximately 38' x 33' to which was added, about 1700, the lean-to at the rear. Entirely typical of this period, the lean-to consisted of three spaces: the center portion, used as a kitchen with a new flue constructed into the old center chimney, and a small room at either end of the kitchen. The one with the least sun was used as the "buttery," for storing liquids, and the one with the greatest sun was used as the so-called "birth-and-death" room. Occasionally during this period the garret above this room would have been used for sleeping, but the only spaces regularly used as bedrooms were the two "chambers" above the hall and parlor.

An ell was added to the Whitman House about 1760 and today is filled with the exhibits of The Farmington Museum.

The Stanley-Whitman House, although built as early as 1660, is an outstanding example of the completed two-room New England house, comprising the basic house plus a lean-to at the rear. The Stanley-Whitman House also has an unrepresentative ell at the rear. Its exterior is particularly important as it is an excellently preserved and restored early example of the structural overhang type, and has handsome drops carved from the upper storey posts below the level of the girts. The completed plan with lean-to is the classic New England "saltbox" shaped house, although an ell added at the rear here, now housing museum pieces, detracts somewhat from the clean lines of the saltbox when seen from some angles.

The Stanley-Whitman House is well-situated midway on a hill, surrounded by trees and an old stone wall, and easily impresses one with its seventeenth century rustic charm. It occupies about an acre of land in a residential area of Farmington, and since the ownership lines of The Farmington Village Green and Library Association, the owner, create a satisfactory buffer around the property, they will constitute the boundary of the National Historic Landmark.

The property is excellently maintained by The Farmington Village Green and Library Association, and is regularly open to the public for a small fee.