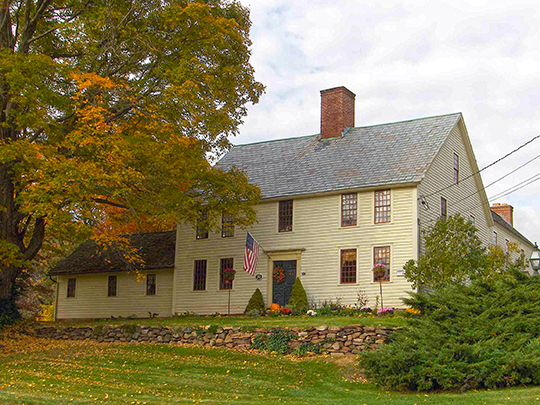 The Town of East Granby includes within its limits the old Copper Hill caverns, and contains many of the relics of the copper mining operations. Here were enacted all the tragical scenes of Tory imprisonment during the America Revolution; and for 54 years afterward this town furnished the sole prison for the Connecticut State convicts. It was set off chiefly from Granby, and in part from Suffield and Windsor Locks, in 1858; Granby having been set off from Simsbury in 1786, and Simsbury from Windsor in 1670. Thus it appears these towns were incorporated at periods respectively about a century apart.

The early history of Easy Granby is involved in that of the bordering towns. Being one of the youngest towns in the State, its official archives do not afford material for voluminous history preceding its creation.

The ancient Indian name of that portion of Easy Granby, Granby, and Simsbury, lying on or near the Farmington River, and embracing Copper Hill, was Massaco (Mas-sah'-co). It certainly would have been no disparagement to those towns had the ancient name been continued; and the Tunxis River (Indian name for Little Crane River) which runs through that section would have flowed just as sweetly and sounded as euphoniously as by its later christening, Farmington.

The fertile valleys in Massaco, the abundance of fish — especially salmon — the great quantity of game, and the upland production of pitch, tar, and turpentine attracted at a very early period the people of Windsor; and they were the first colonists who settled in Massaco.

The Indians in East Granby and other parts of Massaco and Windsor were generally friendly to the white settlers—their confidence having been gained by kindness and usually fair treatment in all business transactions. Their prevailing passion for hunting was very useful to the colonists, who employed them to hunt wolves with which the country was sadly infested.