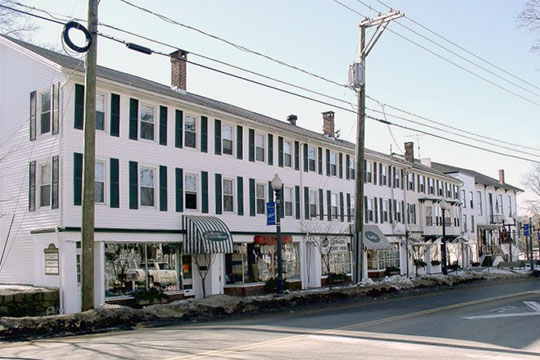 The Greenwood Avenue Historic District was listed on the National Register of Historic Places in 1999. Portions of the content on this web page were adapted from a copy of the original nomination document. [1]

The Greenwood Avenue Historic District encompasses the commercial area of the town center of Bethel, Connecticut, between P.T. Barnum Square and Depot Place. The Greenwood Avenue Historic District includes a number of shops, several restaurants, a former opera house, a public library, and a church. The buildings are mostly from the mid-19th to early-20th centuries and are generally one to three stories high, ranging in style from Greek Revival to various Victorian styles such as the Queen Anne and Italianate. Some of the commercial buildings lack a distinctive stylistic reference but instead make use of the false-front or parapet that characterized vernacular commercial architecture in the late-19th century. Many of the buildings now in commercial use, as well as the public library, were originally built as dwellings, and there are a few that are still in residential use. Most of the buildings are of frame construction, with exteriors that are clapboarded, shingled, or sided; two buildings are constructed of brick.

The oldest buildings in the Greenwood Avenue Historic District date back to around 1845, a period when the Greek Revival style of architecture was most popular, and feature the characteristic gable-end-to-the-street orientation. The Seth Seelye House at 189 Greenwood Avenue, built c.1842, has a full-height portico across the front on fluted Doric columns, as well as a matched-board front gable suggestive of the tympanum of a Classical Greek temple. The house at 152 Greenwood Avenue is a simpler version of the Greek Revival, with its off-center entry framed by a heavy cornice and pilasters; sidelights surround the door.

Victorian styles include the Italianate, represented in the Greenwood Avenue Historic District by a number of commercial buildings with bracketed cornices and overhanging bracketed bay windows. Bethel's 1848 opera house was also remodeled with a bracketed Italianate cornice later in the 19th century. The Second Empire style of architecture is represented in the district by the Putnam House at 12 Depot Place, a three-story structure with mansard roof, dormer windows, and overhanging eaves supported by brackets. To the west at 5 Depot Place is the railroad passenger station, a plain rectangular gabled roof structure with simple Stick-style braces in the gables as architectural ornamentation. The facade of the three-story commercial building at 118 Greenwood Avenue illustrates a Queen Anne-style influence in its steeply pitched gables atop double projecting bays.

The Greenwood Avenue Historic District's only church is the c.1861 United Methodist Church at 141 Greenwood Avenue, an eclectically detailed building that includes a Greek Revival cornice and pilasters, Italianate round-arched windows, and a Gothic Revival tower. The tower features a castellated square turret and pinnacles at each corner. Above the turret is an octagonal bell tower with denticulated gables on each side. The tower is capped with a gold leaf dome within an octagonal balustrade, again with pinnacles at each corner.

P.T. Barnum Square is a small triangular plot of land located at the east end of the Greenwood Avenue Historic District between the intersection of Wooster Street and Greenwood Avenue. The park is shaded by two large oak trees on the south side, and there are several benches along the paved pathways; the park's perimeter is lighted with reproduction cast-iron streetlights. The central feature of the park is a bronze World War I Doughboy statue set on a granite pedestal. The statue depicts a soldier holding a rifle in his left hand, while his right hand holds a grenade above his head. The statue is set on a planted circle from which pathways radiate to the outlying sidewalks. Directly behind the memorial is the town flagpole.

The Town of Bethel originated in 1759 as the Second Ecclesiastical Society of Danbury. During its formative years and into the early 19th century, Bethel was primarily a small, self-sufficient farming community. As nearby Danbury grew into a successful manufacturing city, based primarily on the hat industry, Bethel also prospered and had several small hat factories in the town center. Eventually, after several petitions for separation, Bethel, meaning "House of God," was formally incorporated as a town in 1855.

The community's first Congregational meetinghouse and burying ground, dating from 1760, were located on a parcel of land that lies outside the district, on Main Street where stands the present Congregational Church. However, Greenwood Avenue, formerly known as Center Street, emerged as Bethel's principal thoroughfare because it provided an axis between the railroad depot and several small hat shops. In the vicinity of P.T. Barnum Square were once such enterprises as the hat factory known from 1884 to 1906 as the Cole and Ambler Hat Manufacturing Company (and later the D. Higson and Company and the Fay-Gorman Company) and G.G. Durrant's Hat Factory, which became Richmond Brother's Hat Factory in the 1880s. Although the hat shops are now all gone, along with other industrial enterprises such as the English and Lynn Cigar Factory, there remains in the district an early 20th-century woodworking shop, the successor to a long line of planing mills and lumber businesses dating to the middle 19th century, as a symbol of the center's industrial heritage.

The railroad station at Depot Place recalls the importance to Bethel of the arrival of the Norwalk and Danbury Railroad in 1852. The connection with Norwalk, a commercial center on Long Island Sound, helped industry in town because Bethel's hatters could now inexpensively ship their finished products to larger markets through New York City wholesale merchants. The railroad stop also encouraged the development of stores, restaurants, billiard parlors, and hotels nearby, catering to travelers and residents alike. For example, the building at 190-198 Greenwood Avenue was formerly the site of Seth Seelye's general store in the mid-19th century. The Seelye family was well-known for its involvement in the hat manufacturing industry as well as other financial enterprises in Bethel and Danbury. The Fox brothers ran a hotel in the building at 178-182 Greenwood Avenue for many years, rivaled by the neighboring Platt's Hotel. Other 19th-century commercial enterprises occupying the Greenwood Avenue Historic District's business blocks included a drugstore, three bakeries, a confectionery, a furniture store, a newsstand, several groceries, a fruit store, a fish market, a barber shop, and a candy, stationery and tobacco store.

Bethel Center was also a place for the town's social events. The Bethel Opera House, built in 1848 and later remodeled in the Italianate style, was earlier known as Fisher's Hall, with a meeting place on the second floor for various lectures and a saloon and billiards parlor on the first floor. At the end of the century it became the Nichols Opera House, which was able to seat up to 400 people. Other social events took place at the Knights of Honor Hall, located on the third floor of the building at 130-134 Greenwood Avenue, and the Masonic Hall, above 116-188 Greenwood Avenue.

The importance of the area as a town center was underscored in 1861 when the Methodist Church, which previously had met in private homes or social halls, erected its eclectically detailed church at 141 Greenwood Avenue, in 1861. Important civic functions were also relocated to the area, including the Post Office, which at one time was located on the first floor of 134-1348 Greenwood Avenue and later moved across the street, and Bethel's municipal offices, which in the early 20th century occupied the Masonic Hall building at 116-188 Greenwood Avenue.

Even as it was undergoing commercial expansion, the area retained a number of private homes interspersed among the business blocks, many of which were occupied by Bethel's leading businessmen and hat manufacturers. The c.1860 Greek Revival house at 129 Greenwood Avenue once belonged to O.H. Hubbard, who owned a hat finishing factory in the town, and Clark Ferry, another Bethel hat maker, built the c.1845 house at 138 Greenwood Avenue. The single example of the French Second Empire-style house in the Greenwood Avenue Historic District, 12 Depot Place, was built by Frank A. Judd, a partner in J.B. and F.A. Judd and Company, yet another hat manufacturing firm in Bethel. Perhaps the most notable house in the Greenwood Avenue Historic District is the 1842 Seth Seelye House at 189 Greenwood Avenue, built by one of Bethel's leading citizens of the time. Seth Seelye was a large Bethel landholder and businessman with interests in numerous enterprises, including hat shops and the store across the street. His sons donated the building to the town, and it now serves as the Bethel Public Library.

The area's growing urban identity was augmented in 1881 by the development of a small triangular ornamental park at the east end of the district. The park was given by P.T. Barnum, the flamboyant showman and creator of Barnum's "Greatest Show on Earth," a combination of menagerie and circus performances. Barnum, who was born and raised in Bethel, donated a 16-foot fountain depicting a Triton holding a conch shell above a shell-shaped basin, into which fish spurted water from their mouths. Its original name was Fountain Place; however, during the winter of 1921, the fountain froze and cracked. It was replaced by the present Doughboy statue in 1928, and the park was renamed P.T. Barnum Square.

The Greenwood Avenue Historic District has architectural significance because among its buildings are many well-preserved examples of particular styles and periods of architecture. From the Greek Revival through the various Victorian styles to the early 20th century, the buildings in Bethel Center provide an illustrated history of small-town American architecture.

The commercial architecture of the Greenwood Avenue Historic District primarily illustrates the Italianate style, with its bracketed cornices and bay windows. In some cases the brackets are reduced to just end consoles on a false-front parapet, the small-town vernacular embodiment of urban commercial architecture. Other buildings in the district embody the asymmetry and picturesque gables that are hallmarks of the Queen Anne style and the distinctive mansard roof that defines the Second Empire style. The essential eclecticism of the Victorian period is demonstrated by the United Methodist Church, combining Classical Greek, Gothic, and Italian influences. Taken together, they constitute a locally important concentration of historic architecture, one that helps to substantiate the sense of time and place that makes the Greenwood Avenue Historic District historically significant.

Previous Surveys (All deposited with the Connecticut Historical Commission):