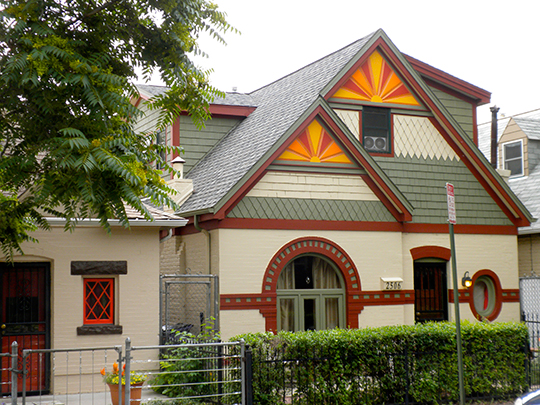 The Highland Park (Scottish Village) Historic District was listed on the National Register of Historic Places in 1985. Portions of the content on this web page were adapted from a copy of the original nomination document. [‡]

The Highland Park (Scottish Village) Historic District is the only fragment left of Denver's unique example of a High Victorian romantic suburb. It was laid out in 1874 on the rolling bluffs northwest of Denver City and the Platte Valley by Dr. William A. Bell and General William Jackson Palmer who named their experimental suburb Highland Park. Originally, Highland Park was the largest holding in the Highlands, running diagonally across section 29 from Zuni to Lowell between West 26th and West 38th avenues. Now, the only part of Highland Park to remain intact is the small, roughly triangular shaped piece of land bounded by West 32nd Avenue on the north, Zuni Street on the east, Dunkeld Place on the south and Clay Street on the west.

Within Scottish Village are one hundred and thirty-three structures, mostly small and residential in nature, laid out along lanes that contour the hillside. There are only eleven commercial structures, all along the Zuni and West 32nd Avenue perimeters where there have always been neighborhood businesses. There are twenty-eight non-contributing structures and only a few vacant lots.

Highland Park is among the earliest, and certainly the most ambitious and unusual, of the 36 subdivisions that developed in the last quarter of the 19th Century in the Highlands above North Denver. Against the orderly grid of Potter Highlands, Bell and Palmer's suburb had a highly irregular plan different from other subdivisions in northwest Denver. Curving streets edged knolls of land that the old plats show to have been divided into lots much like the deep lots ubiquitous in Denver. Except at the softened corners, serpentine roads and contoured lanes interfered surprisingly little with lot size in Highland Park. They lent it a rustic air which was enhanced by extensive parkland with lakes and groves of trees west of the Boulevard, now Federal.

When Highland Park was laid out, a natural southern boundary was provided by a deep gully running diagonally from Zuni at West 27th to Lowell at West 35th, improved, it was called West Lake Boulevard. Now, as North Speer, it is still a natural boundary which divides the north half of the Highlands from the south. Highland Park scarcely entered into the southwest quarter of section 29, and the northeast quarter section, owned by the Baptist Mission, was developed as Potter Highlands. Across Federal, originally filling the northwest quarter section,was perhaps the most picturesque sector of Highland Park, with a whole sequence of parks and lakes. There are but faint traces of this western part of Highland Park left on the landscape. The other half of Bell and Palmer's Highland Park was in the southeast quarter of section 29 which also included Hager's subdivision and some undeveloped land. On this side of Federal Boulevard is the area known today as Scottish Village, which is the last remnant of the original subdivision.

Highland Park was first laid out and advertised in the spring of 1874 with lots of 50 x 175 feet. The lot size shows it was originally promoted as an exclusive suburb catering to those who could afford to house their families in style and safe from the ills of the city. The promoters intended to create in the Highlands of Denver a "villa park," that is to say an elite suburb patterned after Frederick Law Olmsted's well known 1869 plan for Riverside, a commuter suburb of Chicago. However, the original vision of Palmer and Bell did not quite materialize since the large lots did not sell well. By 1887, claim to the half of Highland Park lying west of Federal Boulevard was vacated by the promoters and the area east of Federal was re-subdivided, cutting the original lots in half in width and in depth. The smaller lots sold relatively well with the area really beginning to develop in the mid 1880's. Instead of a villa park, with Italianate or Queen Anne houses set on large wooded lots, the area developed a working class quarter characterized by tightened infrastructure and high-density low-rise structures.

Today's Scottish Village consists of long lobe-shaped blocks, originally blocks 1, 2, 5, 6, and 7, which are contiguous. The street layout is best understood as two sets of blocks, mirroring each other, although imperfectly, either side of Fife Court which is the spine running north-south through the whole village. There are the four blocks (originally 1, 2, 5, and 6) of small lots between West 32nd Avenue and Caithness. Alleys cut in and out, between houses, as well as more conventionally between lots facing onto different streets. Below these, to the south, is the second set (originally block 7) which is now two large blocks between Caithness and Dunkeld. They are divided by an alley east-west, and by a later extension of Fife north-south. The lots are the original size in depth, and they seem enormous compared to those north of Caithness. The east-west streets, Argyle, Dunkeld and Caithness, are like ledges or terraces, contouring the downsloping land. Some softened or oddly angled corners make for odd shapes of lots, but the rest are fairly regular. On the north side of these streets, and especially up closer to West 32nd Avenue, the lot is higher than the sidewalk and divided from it by a retaining wall. Since the sidewalks are narrow with no street trees, it is only this and planting in small front yards which gives the houses some privacy from the street.

What remains of Bell and Palmer's failed villa park does have a certain architectural distinction in that Scottish Village illustrates one hundred years of low cost housing. Of 133 buildings, 58 were built between 1875 and 1900, the oldest dating perhaps to the early 1880's. Forty-nine buildings date between 1900 and 1925, seven were built between 1925-1940, and 19 have been built since 1940. Even the intrusions, houses built after the mid-1930's, tend to accord with the character of the district. Those that are out of character are those that have too large a mass, or are set on too large a lot. The Zuni Plaza Shopette, set on the very large plot where the streetcar barns were once located, is the most intrusive. All the older buildings in Scottish Village are small and are set close to the front and side lot lines. Of the 18 vacant lots, ten are so small that they scarcely read as a gap in the streetscape. The streetscape is enhanced by old trees and by the many fragments of old fences, walls and walks that remain. The random placement of trees adds to the feeling of a village.

Among all the buildings included in the district, two housing types - loosely characterized as cottages and terraces - constitute the great majority of dwellings. A total of 70 dwellings are classified in the survey as "single family," though 49 structures now house more than one family. Single family houses will be discussed under two different categories - those with front gables and those with hipped roofs. Virtually every contributing house in the district falls into one of these two categories. Duplexes, triplexes and other small scale multi-family housing types are discussed under the heading of terraces. This is a generic term commonly used in Denver to refer to almost all forms of linear multi-family structures from duplexes to row houses.