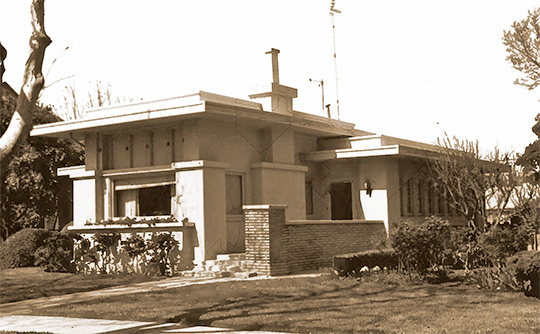 The Monterey Street Historic District was listed on the National Register of Historic Places in 1992. Portions of the content of this web page were adapted from a copy of the original nomination document. [‡]

The Monterey Street Historic District reflects the state of architectural development in Hollister at the beginning of the Second World War. In particular, it depicts changes and continuities in architecture, especially residential architecture, from the founding of the town to the end of the Great Depression. The district illustrates architectural styles and building types and symbolizes some aspects of social life in Hollister during the period.

Residential construction in the district began soon after the founding of the town in 1868. By the mid-1870s Hollister had divided itself into three main zones. Industrial activity, reflected in such structures as warehouses and processing plants, arose on the east edge of town along the railroad tracks. Immediately to the west the commercial section ran along San Benito and Fourth Streets. The main residential area, meanwhile, grew up south of Fourth and west of San Benito. The district was the center, with houses constructed on Monterey and cross streets from the courthouse on Fifth to the city limits on South. The residential area soon proved too small for the growing population. The Hawkins Addition on the south roughly doubled the size of the city and opened the way for construction in the southern half of the district.

Building continued, usually one house at a time, throughout the period of significance. Dates of construction reflected residential needs to some extent. For example, during the first decade of this century Hollister experienced its highest rate of population growth (43 percent) and the district saw its largest increase in new houses. On the other hand, little construction occurred in the district during the 1930s, a time when Hollister's population grew only 3 percent. The district was finally built out in 1941. At that time one or more structures stood on every parcel in the district. Like the rest of the country in the early 1940s, Hollister underwent a virtual shutdown of construction not related to the war effort. Some new houses were put up in the decades after the war, either as infill on newly subdivided lots or replacements for earlier structures. Nevertheless, the district appears today much as it did in 1941.

The district offers a wide variety of building types and architectural styles in their original settings. During the period of significance construction costs were low (at least by modern standards) and Hollister maintained a fairly high level of general prosperity. As a result, most of its permanent residents lived in single-family houses, and most of the houses were occupied by their owners. Nevertheless, because the residents varied widely from one another in their incomes and occupations (not to mention family size and aesthetic preference), their dwellings differed in spaciousness and architectural sophistication. The district reflects these differences.

About half of the houses were not designed to represent an architectural style. Some were purely functional and had no ornament or stylistic pretension. Among these vernacular buildings the single-story gable and wing was constructed most often. Because of its simplicity the type maintained its popularity for a half-century. Although most examples were constructed in the district before 1890, some date to the 1920s. Sometimes builders used the basic form and added decorative elements from popular styles—for instance, turned posts on the porch or a bay window beneath the front-facing gable. Often houses with more complicated layouts (mass plans and hipped roofs, for instance) also took stylistic ornament without exemplifying the style itself.

The remaining buildings reflected styles popular at different times during the period of significance. Many displayed sophisticated designs rendered with obvious care and craftsmanship. Notable from the period before 1890 are the Italianate cottage at 481 Seventh Street and the Gothic Revival church at 620 Monterey. The Queen Anne became Hollister's favorite style at the turn of the century. The district has several well executed examples, including single-story cottages and two-story houses with towers. Local builders then joined the Craftsman movement, providing the district with a number of bungalows displaying an abundance of typical detail. The district's only Mission Revival building, the former Hazel Hawkins Hospital, was built during the same period. More surprising were the district's Prairie School buildings. The house at 380 Haydon (ca. 1909) was designed almost before the style arrived in California, and the one at 472 South offered an uncompromising rendition. Period revivals appeared in the 1920s, with most constructed in the southern half of the district. A couple of "modern" houses, in which the arrangement of volumes gave a sense of abstract sculpture, were built just before World War II. The clearest example is at 1000 Monterey.

The houses in the district differ in size as well as style. They represent a time in which people of diverse income level and social class lived together in the same neighborhoods. Homes of highly successful businessmen were located only a few yards from those of artisans and semi-skilled workers. The two-story T. H. Hawkins House, for example, at the corner of Monterey and South Streets, stands amid a group of smaller houses, of which some in the 300-block of South have only a few rooms. The juxtaposition of these buildings may symbolize an acceptance of relative wealth and poverty on the part of people of all income levels.

Generally, the district reflects through its collection of detached houses an era in which the conjugal family was the dominant form of domestic organization. But there were exceptions—buildings designed to be used as apartments by single people or childless couples. The district has a number of secondary residential buildings, containing one or more units and located in the back yards of larger houses. These were constructed from the 1880s through the end of the period of significance. Most were purely functional in form, although a few were designed with stylistic intentions. The district's most interesting approach to multi-unit construction was Hollister's first bungalow court, built in the 1920s at 950 Monterey Street.

The district also illustrates the growing importance that residents of Hollister gave to their automobiles. In the older northern half of the district, garages were placed on the alleys and designed simply to be functional. This approach to storing automobiles reflected a disinterested view of them—that they were instruments to be used and then put aside. In the newer southern half garages faced the street and were approached by long driveways. In several instances the garages were designed to match the house in front through the use of similar roof shapes, siding, and details. The car, with a little house of its own, had become part of the family. Nevertheless, the garages remained separate structures, indicating that in 1941 a detachment still existed in Hollister between owner and automobile.

Residential construction took a dramatic turn when building began again after World War II. The new neighborhoods lacked architectural diversity. Houses were often laid out in tracts in which each building looked nearly the same as its neighbors. Construction was grouped more by income level, with the wealthy secluding themselves from those less well off. Multiunit apartment buildings appeared on parcels without single-family houses. As building moved from the center of town, garages reflected the growing importance of the automobile. They were attached to post-war houses and moved forward to front the street, finally coming in the most recent designs to dominate the building's facade. Curving streets, sometimes without sidewalks, were another feature of postwar neighborhoods.

The Monterey Street Historic District reflects the architectural development of Hollister more clearly than any other group of buildings. No other neighborhood exhibits such a large collection of vernacular buildings, and none displays so many well executed examples of architectural styles from the period of significance. While the mixing of large and small buildings typified residential construction throughout Hollister before World War II, no other neighborhood provides such dramatic contrasts. Nor does any have so many contributing buildings or such a high degree of architectural integrity among contributors.

Well defined boundaries add to the district's cohesiveness. On the east is the downtown commercial zone. The northern and southern borders are marked by the county administrative complex and the high school, respectively. A large city park interrupts residential development on the west. The Monterey Street Historic District reflects the status of architecture in Hollister after the town's first 70 years. Through its high level of architectural integrity, the district maintains strong associations to its period of significance.