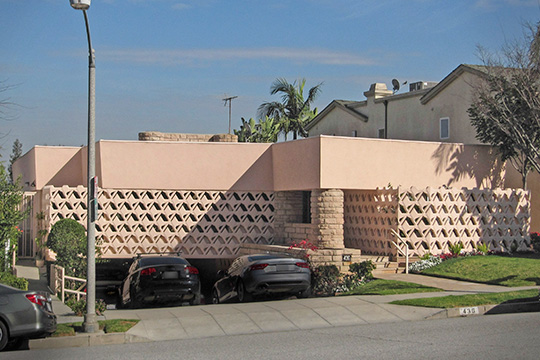 Beverly Hills was created in 1906 when Wilbur F. Cook Jr. developed a plan for a balanced, self-contained community. The City was designed with smaller lots at its southern edge and large estates in the foothills to the north where residential streets were gently curvilinear and lined with trees. To this day, the general pattern of land use and famous street trees reflect the original plans for the City. The City was largely developed during the 1920s, when its location and design attracted affluent residents and visitors drawn to the burgeoning film and entertainment industry and the upscale shopping in what is now the Business Triangle. [1]

The architecture of Beverly Hills in the years following the City's founding was dominated by the Craftsman, Mission Revival, and Period Revival styles (Tudor, French, Georgian, Beaux-Arts Classicism). With Beverly Hills establishing itself as a haven for movie stars in the 1920s, the architectural character of the city began to realize a varying degree of extravagance in the design of its housing stock. Throughout the late 1920s and 1930s sophisticated period revival styles dominated the domestic architecture of the City. By the mid to late 1930s Beverly Hills became one of the areas in southern California most closely connected with the development of the Hollywood Regency style. Born of the meeting of Moderne sleekness with the elegance of early nineteenth century architectural forms, it used simple, primary forms and blank wall surfaces to project exclusivity and sophistication. Beverly Hills' domestic architecture in the post-World War II era saw the incorporation of Revival references in its new housing stock, and also the introduction of contemporary, luxury designs reflective of the Mid-century Modern idiom. [2]