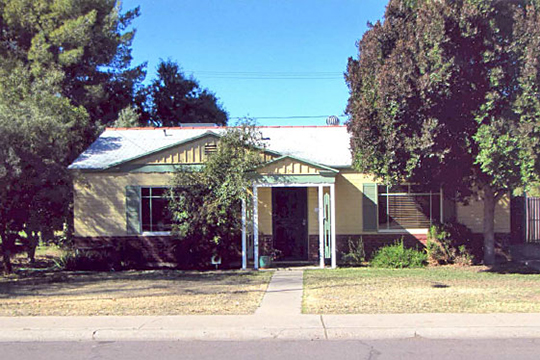 The Borden Homes Historic District was listed on the National Register of Historic Places in 2012. Portions of the content of this web page were adapted from a copy of the original nomination document. [‡]

The Borden Homes Historic District is one of the best preserved neighborhoods representative of the early post-World War II era in Tempe. It has 68 one-story single-family houses and one duplex; all but four of the houses were built before 1957. The neighborhood has a high level of integrity in both architecture and landscaped environment; it conveys a strong sense of the period in which it was established and has a distinctive character that sets it apart from surrounding areas. The chronological development of the subdivision from south to north to east spanned the decade after World War II, a period when new construction materials and stylistic changes were introduced, and the street-scape of the Borden Homes Historic District visually represents the gradual evolution of rapidly changing home building methods.

The Borden Homes Historic District is a well preserved post-World War II neighborhood that is most representative of new approaches to subdivision development and residential design and construction in Tempe in the late 1940s and early 1950s. Borden Homes was the first subdivision of tract homes established east of Tempe after the war in anticipation of the emerging population boom that would soon bring expansion of the city's boundaries to incorporate the area. It provides an excellent example of the transition from small builders constructing individual homes on available lots to a new approach where a subdivision was developed by a single builder. Almost half of the houses in the neighborhood were built 1947-1948, and offer outstanding examples of the Early/Transitional Ranch Style. The remaining houses, built 1949-1956, show the gradual transition to the true Ranch house and how the evolution of masonry construction methods was influenced by the availability of new materials and new building code requirements. The underground flood irrigation system that serves Borden Homes and the landscaped environment that it supports are important components of the neighborhood design, features so desirable in mid-century Tempe that the irrigation works were constructed before street paving or any other improvements. The period of significance for the Borden Homes Historic District, 1947-1959, spans the first decade of an unprecedented housing boom that transformed a small farming community into a modern city. Between 1940 and 1960 Tempe's population rose from 2,900 to almost 25,000 residents. While Borden Homes was one of the first developer-built neighborhoods, it was also the last of the small subdivisions, for the quarter-section (160 acres) became the standard unit for subdivision development in the 1950s. Most of the homes in the Borden Homes Historic District were built before 1957 and have retained their historic integrity.

J.A. Farnsworth was a farmer and a member of a prominent Mesa family. He had been involved in the residential development of the Glenwood Tract and Farnsworth Place in Mesa since the early 1930s. On October 9, 1947, he recorded a plat for Borden Homes, a 19-acre neighborhood to be built on a field one mile east of Tempe. It was named for the nearby Borden Creamery, a stately Mission Revival style plant that was the mainstay of Tempe's dairy industry. By 1947 the need for new housing in Tempe had overwhelmed local builders' ability to meet the demand. New subdivisions to the south were being filled one house at a time, built by owners or contractors. The first developer-built subdivision of small tract homes, the Roosevelt Addition, offered only 16 new houses, which were quickly bought up by returning veterans and young families. Farnsworth's neighborhood site was ideally located just north of U.S. Route 80, which was also the alignment for U.S. routes 60, 70, and 89, also known as Apache Boulevard. With convenient automobile access, it was logical that Tempe's suburban growth would spread to the east. Farnsworth reserved 300 ft of frontage on the highway for future commercial development.

The Farnsworth Realty Company immediately began building modest brick houses on Una Avenue. Both the design of the subdivision and its individual homes reflect the emerging trend in homebuilding after World War II, which was largely based on Federal Housing Administration (FHA) guidelines for subdivision development. Large uniform lots and an irregular curvilinear street plan discouraged through traffic. Houses were all of similar size and design. Compliance with FHA standards was a critical factor in marketing homes, for the agency's evaluation of both a house and its surrounding neighborhood helped determine whether a home buyer would be eligible for a federally-insured mortgage. Borden Homes conformed to most of the FHA's minimum and desirable standards: local demand for housing, suitable site, accessibility, utilities, compliance with local regulations and zoning, large lots, and street layout that limited automobile traffic. One criterion the subdivision did not meet was deed restrictions that set mandatory building guidelines and prohibited home sales to members of racial and ethnic minorities. As Farnsworth sold only finished homes, he ensured that placement and construction of houses was consistent, and by this time discriminatory attitudes towards Mexican Americans in particular had diminished considerably. There were several Hispanic homeowners in Borden Homes. Farnsworth completed 13 houses in early 1948 and mortgaged them to Western American Mortgage Company on April 21, 1948, to finance construction of the next group of houses. Buyers then assumed these mortgages, which ranged from $5,800-$6,600. By 1950 he had built and sold 40 houses on Una and Butte avenues.

As early as 1948 city officials began considering annexation of a half-mile-wide strip along U.S. Route 80 extending more than two miles east of the city to the Tempe Canal. While there were very few residents in this area there was strong opposition from property owners, who hired attorney William Burke and discussed establishing their own incorporated town. Two years later, residents of Borden Homes and Hudson Manor, a new subdivision built on the south side of the highway, still opposed annexation and blocked the city's expansion to the east, where a half dozen new subdivisions were under development. However, by this time many of these neighborhoods were connected to the municipal water system, and city plans to cut police and fire department services to unincorporated areas encouraged homeowners to agree to annexation. A series of ordinances in March 1950 extended Tempe's boundaries east to their present location, increasing the size of the city by nearly 50 percent. In 1950 J.A. Farnsworth announced plans to build 18 houses on the undeveloped eastern end of the subdivision, along 12th Street, but Farnsworth did not follow through with this plan. Two years later Farnsworth sold the 12th Street lots to Bernard M. Brown, and the last part of the neighborhood was built 1954-1956. At this time a small apartment building was built at 1131 S Butte, outside of the subdivision but facing into it; it was demolished ca. 2005. The year 1956 marks the initial build-out of Borden Homes. The remaining easternmost portion of 12th Street was developed 10-15 years after the period of significance.

Resources in the Borden Homes Historic District include examples of the Early/Transitional Ranch style and the classic Ranch style. The Ranch style was introduced in California in the 1930s and quickly became a popular regional style. After the war, its innovative design and construction fit well with emerging social, economic, and technological trends. Eventually it became the dominant architectural style in the United States where, particularly in the West, it would represent the most ubiquitous house-form for the next 30 years. Homes built in the early postwar period, 1945-1950, represent early examples of the style and a transition away from the earlier approaches to residential construction.

In contrast to previous Period Revival styles, early Ranch architecture was deeply rooted in the American West. The Ranch style drew its inspiration from the 19th century adobe ranch houses of California, as well as the Craftsman style and early Frank Lloyd Wright Prairie houses. The simple and sparsely adorned houses reflected the romantic imagery of the past and the new social trends of informality and casual home life embodied in post-war suburbia. The Ranch house typically featured a low-pitched roof with deep eaves and a few traditional elements such as clapboard, false shutters, and a small entry porch. It also reflected the growing importance of the automobile, which brought sprawling subdivisions with larger lots, allowing the broadest side of the house to be the primary facade. The low horizontal profile of the home facing the street shows many visible planes and angles, creating a bigger, more spacious look for a small house. The new orientation of the house also placed more emphasis on the back yard, and large windows, glass doors, and patios often faced a landscaped private refuge at the rear of the lot. The substantial break from the more exotic designs and materials of the earlier Period Revival styles reflects the new postwar optimism for the future and modernism's tenets of simple, clear, unpretentious design.