Photo: The Mesa Journal-Tribune FHA Demonstration Home (also known as the Charles A. Mitten Home), ca. 1936, 22 East First Avenue, Mesa, AZ. It was the first home in Mesa to be financed by a Federal Housing Administration secured loan. The Mesa Journal-Tribune sponsored the construction of the home to promote the FHA and to prove to Mesa citizens what $50 per month could provide in home ownership. The project did, in fact, result in a boom of FHA-sponsored construction in Mesa in the late 1930s. Listed on the National Register of Historic Places in 1988. Photographed by User:Marine-69-71 at English Wikipedia (own work), 2013, [cc-by-3.0 (creativecommons.org/licenses/by/3.0)], via Wikimedia Commons, accessed July, 2013. 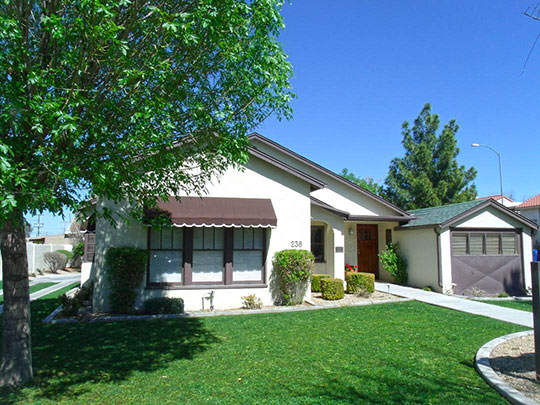 Members of the Church of Jesus Christ of Latter Day Saints (LDS) founded an agricultural settlement in the Salt River Valley in 1877 that would grow to become part of the community of Mesa. A group of LDS settlers arrived in 1877 and founded a community close to the Salt River known first as Utahville and later as Lehi. Daniel Jones led this first group of settlers. This group started construction of the Utah Ditch from the Salt River to provide water for the agricultural enterprise.

Mesa proper got its start in January of 1878 when a second group of LDS pioneers arrived from Utah and Idaho to make the Salt River Valley their home. Known as the Mesa Company, prominent members of the second group of LDS immigrants included Charles Crismon, George W. Sirrine, Francis Martin Pomeroy, and Charles I. Robson. This second group selected a location on flat table land above the river to the south of Lehi, thus the name "Mesa." In May of 1878 T.C. Sirrine located a section of land suitable for a townsite and deeded it to the community. Three men were designated to serve as trustees to distribute the land. The first trustees were C.R. Robinson, G.W. Sirrine, and F.M. Pomeroy. The second group of pioneers started a canal to serve the mesa lands. Known as the Mesa Canal, this irrigation canal also took water from the Salt River.

Families received portions of the townsite based on the value of labor and materials they contributed to the construction of the Mesa Canal. On August 29,1881, Ted Sirrine received the final homestead certificate for Section 22 which contained the Mesa townsite. Residents petitioned the Maricopa County Board of Supervisors for incorporation as a town on July 5, 1883. Mesa received incorporated status as a town on July 15,1883.

Between 1878 and 1883 a regular influx of Mormon (LDS) colonists arrived to settle near the townsite. Mormons in Utah received the news that rich farming land was available along the Salt River with anticipation. A large group of settlers arrived on January 17,1879. This group increased the population of the town by fifty. On January 19, 1880, a third large group arrived. Other settlers arrived in smaller groups, gradually building out the community of Mesa.

William N. Standage headed the third large group, arriving on January 19,1880. Other prominent names among this group included Chauncey F. Rogers, Hyrum W. Pew, and Henry Standage. This group felt that most of the best land in the townsite was already taken, so they went about one mile west and established a community named Stringtown. The Mesa Canal Company gave permission to extend the canal to their location. The settlement took its name for its shape as it paralleled the canal.

The early settlers realized the importance of education for their children and the establishment of a school was a priority. In 1879 Mary Pomeroy began teaching classes in a shed at what is now Sirrine and First Avenue. In 1882, residents constructed a dedicated school building of adobe at the northwest corner of Second Avenue and Center Street.

The plat of the Mesa City townsite followed a plan established by LDS leader Joseph Smith in 1833. This plan was originally created for the proposed City of Zion that was to be constructed near Independence, Missouri. With the forced migration of LDS settlers from Missouri, most of the new towns established by the pioneers in the West — including Mesa City — followed the same plat.

Smith's plan called for streets 132 feet wide on a grid one square mile wide. Each block contained eight rectangular lots one and one-quarter acre in size. While the original 1833 plan envisioned three large blocks at the town center, the plat of Mesa City contained only two public squares—one in the northern portion of the plat (Block 30) and one to the south (Block 20). To complete the plan, the entire town was ringed on all four sides with blocks only one lot deep. Two small blocks totaling about six acres were reserved north of town boundary on the north section line of Section 22 for a burying ground. An unusual feature of Smith's plan was that the frontage of the blocks faced in alternating sections—the lots on one block were oriented north and south while on the adjacent block the lots were oriented east and west.

From 1883 to 1890 Mesa City grew slowly into a small Mormon settlement that served as the center of an agricultural community. The population grew from approximately 100 in 1878 to 400 in 1890. During this time period residents occupied themselves with establishing a town government, building houses and business enterprises, and looking after social and religious needs.

One of the lasting activities of the early town council was the re-naming of Mesa's streets. The 1883 plat named only five east-west streets, from First Street to Fifth Street—leaving the streets on the edge of town un-named. In a similar fashion, north-south streets were designated from "A" Street to "E" Street, again leaving two unnamed streets on the edge of town.

On May 3, 1884, the town council designated the major north-south street in town as Centre (Center) Street and the major east-west thoroughfare as Main Street. Streets north of Main were designated as streets (First through Third) and streets south of Main were designated as avenues (First through Third). Center Street divided the town, with addresses on its west side listed as "west" and addresses on its east side listed as "east." The town council honored early settlers by designating other north-south streets after prominent Mesa pioneers. From the west these included Crismon (originally Maricopa and now Country Club Drive), Morris, Robson, MacDonald, Sirrine, Hibbert, Pomeroy, and Hobson (now Mesa Drive). The streets on the north and south edges of town also honored early settlers: Lewis (now University Drive) on the north and Newell (now Broadway Road) on the south.