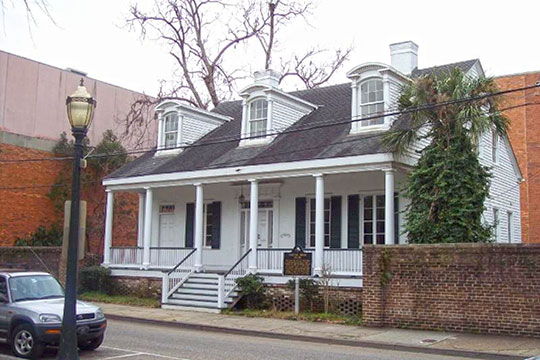 The Church Street East Historic District was listed on the National Register of Historic Places in 1971 with extensions listed in 1985 and 2005. Portions of the content of this web page were adapted from a copy of the original 1984 document. [‡]

The Church Street East Historic District extends in an irregular line north and south of Government Street from Water Street on the East to Bayou Street on the west. In this area can be found the primary governmental, educational, religious, commercial and residential buildings which have provided a focus for the activities of the city from the nineteenth century to the present day.

The City of Mobile was founded on the site of the reconstructed bastion of Fort Conde. In close proximity to the Fort is the Southern Market/City Hall which served as the seat of municipal government since the time of its construction in 1856. Across the street is the traditional site of the court house, although the current building is modern and not architecturally significant.

During the nineteenth and early part of the twentieth centuries, the educational focus of the city was on Barton Academy, constructed in 1836 in the Greek Revival style. It originally housed four separate tuition and denominational schools and became a free school in 1852. It remained a public school until 1965 when it was converted into offices for the Mobile County Board of Education. At the western edge of the district is the Mobile Public Library, constructed in 1928 by George B. Rogers. This building which was built to serve the needs of an expanding city continues to serve the community until today.

Architecturally significant religious buildings can be found in the district. These include such examples as the Government Street Presbyterian Church and Christ Episcopal Church both examples of the Greek Revival. The AME Zion Church at 112 S. Bayou Street is an early black church done in a Romanesque/Gothic mode. The First Baptist Church on Government Street, constructed in 1908, utilizes the prevailing Neo-Classic style of that time. Numerous commercial buildings remain in the Church Street district among which are the LaClede Hotel, the Slava Building at 126 Government Street, the Antomanchi Building in Fort Conde Village and the three story Gibbons House on S. Conception Street.

Residential construction in the district is diverse and representative of many building periods and styles. The Federal style as it developed in Mobile can be seen in such examples as the Elkus House at 50 S. Franklin Street and the Chighizola House at 6 S. Franklin. Two of the remaining three double houses in the city are to be found in the district—the Chamberlain-Rapier House at 56-58 S. Conception Street and the Hugie House at 109-11 S. Conception. Federal buildings were often embellished with cast iron porches. These are also well represented in the area and include such buildings as the Chandler House at 205 Church Street, the Hamilton House at 407 Church Street, the Bunker House at 201 S. Warren Street, the Batre House at 856 Monroe, the Hallett House at 503 Government and the Quigley House at 751 Government Street. The designs found in these cast iron porches are varied and of excellent quality, comparing favorably with examples from the DeToni Square Historic District, known for its fine cast iron work.

Many Italianate houses are to be found in Church Street among the finest of which is the Horst House at 407 Conti Street. The Osborne House at 501 Church and the Pollock House at 501 Government are two other outstanding examples in the area. No houses express the local Italianate style more exuberantly than the Ketchum House at 400 Government with its lacy cast iron porch decoration and fence, heavy quoining and elaborate modillions.

Both large and small Gulf Coast cottages in decorated and unadorned versions can be found in the district. They illustrate exceedingly well how this indigenous architectural type was adapted to all economic levels. Small workmen's cottages are common in the western section of the district, while the more elaborate examples can be seen in the Tary Cottage at 104 S. Lawrence Street, the Taber Cottage at 203 S. Warren and the Clemmons House at 551 Church Street. Two exceptional examples of the cottage type in Church Street East are the Bishop Portier House at 307 Conti with its refined Federal detailing and the Ford-Hall House at 165 St. Emanuel Street which is a two-story cottage influenced by classical themes.

Toward the western edge of the district, the number of late nineteenth and early twentieth century buildings increases. These include cottages and shotguns done in Victorian and Neo-Classic versions, large Queen Anne houses and examples of the American Foursquare. One additional and distinctive feature of the Church Street area is the Church Street Graveyard founded in 1819. It was the city's second cemetery, replacing the Old Spanish Cemetery which was adjacent to the Cathedral. Church Street Cemetery contains the graves of many of Mobile's most prominent 19th century citizens. Many grave stones mark the burial sites of victims of yellow fever epidemics that were common occurrences during the nineteenth century. When the cemetery was established, it lay outside the limits of the city; however, by the end of the century, the city had expanded around it.