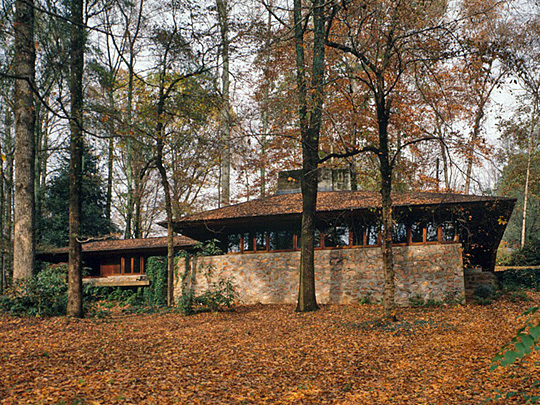 Typically associated with modern architecture of the 1940s, 50s and 60s, Usonia as a concept actually goes back to the turn of the 20th century. Conceived by Frank Lloyd Wright around 1900, Usonia was a design philosophy that evolved over many years, coming to fruition in the 1930s. "He aspired to create a democratic, distinctly American style that was affordable for the 'common people'" (†). As his commissions for large, grand houses dropped off with the onset of the Depression, Wright looked for a way to address the need for affordable middle-class housing while employing a simple design. The result was an architecture he termed "Usonian," which focused on the residents of a culturally reformed United States of North America. The Usonian houses were smaller than his sprawling Prairie style residences, contained little ornamentation and lacked basements or attics. These houses were set up into zones, typically with three areas: living space, small bedrooms, and a kitchen-dining area. Built-in components and furniture allowed homeowners to appreciate the simpler, integrated space Wright intended.

Alvin Rosenbaum, who grew up in an Alabama Usonian house Wright designed for his parents in 1939, noted that:

Usonia was Frank Lloyd Wright's vision for America, a place where design commingled with nature, expanding the idea of architecture to include a civilization, a utopian ideal that integrated spiritual harmony and material prosperity across a seamless, unspoiled landscape. Usonia was a state of mind, combining an evolving prescription for the elimination of high-density American cities and their replacement by pastoral communities organized around modern transportation and communications technology with a new type of home for middle-income families (Rosenbaum ††).

The idea behind Usonia was about more than just designing smaller houses. It was about planning, nature, and simple design on a human scale. Wright's concept for Usonia came about due to his increasing focus on community, planning, and serving human needs. He was interested in setting up decentralized communities with commercial, residential, educational, industrial, cultural, and recreational facilities. While his early concepts of these communities remained just that, many of the components were applied in a handful of places across the country, though not on the scale he originally envisioned. As Wright did with the Prairie style of his earlier fame, he incorporated the smaller Usonian house with the site. Wright integrated the house with the landscape and nature in an attempt to get away from box-like structures. Walls extended beyond the interior to the outside, intermingling the two. Large windows brought the outside in. Natural materials blended the house with the site and warm colors on the interior further contributed to the feeling of bringing the outdoors inside.

Usonian houses were quite unlike the boxy, stark International Style houses that dropped onto, rather than a part of, their location.

Also called Wrightian, the Usonian style has been adopted and adapted by numerous architects across the country. Houses in this style are seen from New York to California, Michigan to Alabama, and everywhere in between. Not much is known about these houses as they are of more recent vintage and often have not been surveyed. Usonian is a recognized style found in such books as How to Complete the Ohio Historic Inventory and House Styles in America, The Old House Journal Guide to the Architecture of American Homes. Given the architect's notoriety, popularity, and strong association with Usonian architecture, most of the available resources relate to Wright's designs, concepts, and thoughts.

The Usonian style has many character-defining elements. In Frank Lloyd Wright's Usonian Houses, author Carla Lind lists both the interior and exterior features typically associated with the style. They are: