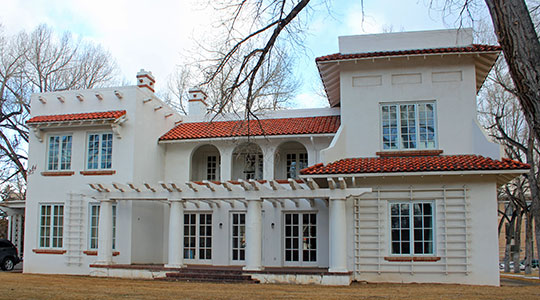 The Cooper Mansion (1141 Grand Avenue) was listed on the National Register of Historic Places in 1983. Portions of the content of this web page were adapted from a copy of the original nomination document. [‡]

Designed by well-known Laramie architect Wilbur Hitchcock and constructed in 1921, the Cooper Mansion has retained its architectural integrity through the years.

During the last century, during the 1870's, Arthur Francis Thomas Cooper of Barten Blount, near Derby, England came to the United States. Traveling west, he arrived in Laramie/ Wyoming. He was a member of a well-to-do landowning family and, like many of his age and breeding, was touring the western United States. Enchanted with the country-side near Laramie and convinced of future economic opportunity, Mr. Cooper decided to remain in Wyoming.

A.F.T. Cooper purchased 5,400 acres of land on Rock Creek in both Albany and Carbon Counties. Stocking his ranch with cattle, Cooper undertook other business ventures including a butcher shop in Laramie which sold meat from his ranch. He sold the ranch in 1904 to Mr. Gardner Haines of Omaha, Nebraska for $140,000, retaining the mineral rights. Cooper then returned to England. After returning to his homeland, Cooper married a young woman who bore him three children, two sons and one daughter. They were named respectively: Richard Francis, John Hartshorne and Barbara Violet Cooper.

In 1917-18, oil was discovered on the former Cooper Ranch in Laramie, Wyoming. A.F.T. Cooper died shortly after discovery of the resource on December 8, 1918. The three Cooper children came to Laramie from England in 1920 to oversee the investment in Wyoming left to them by their father.

The three children jointly purchased the entire block of Block #4, Grand Avenue Addition from City Realty Company in 1921. Plans for a house to be built on the newly purchased land were drawn up by Wilbur Hitchcock, architect. Some of the plans were drawn up from the personal desires of the three Coopers. Parts of the interior, supplied by the Cooper family, included jade-colored marble fashioned into a mantel piece, Dutch Delft fire tile placed around an upstairs fireplace, a hand-carved wood mantel with griffins plus other designs that were unique to the West.

John Hartshorne Cooper adopted auto racing as a hobby and was killed in an accident while racing in Europe. The two surviving Cooper children, Richard and Barbara, continued to occupy the house in Laramie between World War I and World War II.

After serving in the British Army during World War II, Richard Cooper returned to Laramie with his wife and two children from their marriage, Richard and Sylvia. During the war, Barbara Cooper moved to London and served as a fire warden during the bombings. At the end of the fighting, she also returned to Laramie.

Richard Cooper built a hunting lodge in East Africa; he enjoyed hunting and traveled all over the world in search of game. Ernest Hemingway was a frequent guest at his lodge. Cooper died at the lodge on January 27, 1952, leaving his wife and two children. After Richard's death, visitors to the Cooper Mansion in Laramie, Wyoming, included Gene Tunney, World Heavyweight Boxing Champion.

Barbara Cooper spent her time after the war pursuing her painting activities and her interest in archeology. Upon the death of Richard's wife, Barbara brought her nephew Richard to stay with her and her niece, Sylvia, went to stay with her maternal grandparents. Sylvia Cooper visited her aunt and brother during her school vacations. Richard Cooper became the man of the house as Barbara began to age. Before her death Barbara made several donations and scholarships to the University of Wyoming; in 1974 she donated a set of fourteen steel engravings done by E.F. Hicks to the University of Wyoming museum. The younger Richard died in March of 1979 and his aunt Barbara soon followed afterward in November, 1979.

After the death of Ms. Cooper in 1979, the furniture was sent to the coast and some thirty-three famous paintings by Dutch, English and American artists went to Sotheby, Parke, Bernet, Auctioneers, in New York City. Sylvia Cooper was given the wood-carved mantel piece with griiffins and the glass doorknobs from the library doors.