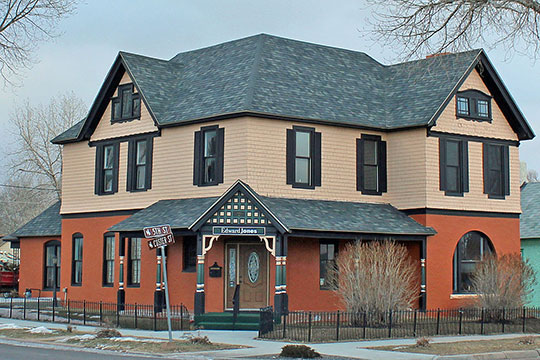 Laramie, seat of the University of Wyoming, is on the east bank of the Laramie River at the southeastern edge of the Laramie Plains. Rows of cottonwoods and poplars bordering the streets are conspicuous against the barren prairie background. Spacious lawns and yards, low-built houses, and wide streets continue within the city the impression of the prairie's wideness. East of the city the Laramie Mountains reach an elevation of approximately 9,000 feet, and day and night temperatures vary from an average high of 77° in summer to an average low of 48°.

A cement factory, an ice-storing plant, a brick and tile kiln, a gypsum refinery, and a timber creosoting plant operate in suburban Laramie, but perennial winds break up the thin wisps of smoke that rise from great jutting smokestacks. There is no hint of industrial activity in downtown Laramie.

One of Wyoming's oldest cities, Laramie is no older than some of its residents. Among modern pressed-brick houses and business buildings stand many huge square Southern Colonial structures. Two rambling frame barracks, which housed United States Army officers at Fort Sanders during the Indian wars of the 1860's and 1870's, now serve as a college sorority chapter house and as a clubhouse for a young people's religious organization.

Jack McCall's arrest in Laramie on August 30, 1876, for shooting Wild Bill Hickok in the back of the head in a Deadwood (South Dakota) saloon is still remembered by Laramie citizens. One year after McCall's arrest, Jesse James, with several companions, was lodged in the Laramie jail as a suspect in a near-by stagecoach holdup, but was freed before his identity was known. The University of Wyoming, three years older than the State of Wyoming, celebrated its fiftieth anniversary in the spring of 1937, and two members of its original faculty were present.

In a region not far removed from the mood and severity of the frontier, interests are limited and directed toward immediate problems; but Bill Nye's contribution to American local-color literature of the 1880's made Laramie self-conscious and somewhat aware of literary currents, while Wyoming was yet a territory. The establishment of Wyoming's only college there in 1887 stimulated interest in the humanist tradition, and the college provided inspiration and opportunity for disinterested thought that could not be paralleled in another Wyoming community.

Here, while citizens elsewhere in Wyoming disputed range and water rights or mined valuable minerals, Grace Raymond Hebard and June Etta Downey were writing volumes on Wyoming history and experimental psychology, and Agnes M. Wergeland was composing music or eulogizing the Wyoming scene in delicate Norwegian verse. Here, too, Ted Olson experimented with verse forms and journalism in school newspapers; G. Edward Pendray observed chemical reactions in test tubes to get authentic data for his novels and articles on mechanized science; and Olga Moore (Arnold) wrote her first sketches and short stories for campus publications. Laramie has several art and humanist societies that developed from campus organizations, and townspeople enjoy college-sponsored dramatic and operatic productions and lecture lyceums. The university's extension and lecture services are spreading over the State. The town was named for the legendary French-Canadian trapper, Jacques La Ramie, whose name was also given to a military post, a mountain range, a peak, a river, a county, and a section of the Wyoming Plains. About 1820 La Ramie, a free trapper, worked the tributaries of the North Platte in what became southeastern Wyoming. According to Coutant, he was killed by Indians somewhere along the river that bears his name.

The first settlements near Laramie were the road ranches on the Laramie Plains, along the Overland Trail, in the 1860's. Operators of these ranch stations lived by supplying hay and emergency provisions to stage companies, freighters, and emigrants.

When the steel tracks of the Union Pacific Railroad glistened along the west slope of the Laramie Mountains in the spring of 1868, Fort John Buford (Fort Sanders) had already been established near the Laramie River to protect the workers and grading crews building west of Cheyenne.

Several weeks before the tracks arrived, a tent town appeared on the river bank. The railroad company had platted a townsite, but allowed no one to settle until lots could be officially sold and recorded. The date of sale was fixed early in April, and land speculators who had done well in Cheyenne were on hand to get choice titles. Within a week 400 plots had been sold at prices ranging from $25 to $260. Ten days later 100 shacks had been erected of logs, canvas, condemned railroad ties, and dismantled wagon boxes. The first train slid down the steep grade into town on May 9, 1868, and with the train came all the population and paraphernalia of 'Hell-on-Wheels.' The first freight carried iron rails, cross-ties, plows, scrapers, tents, portable shanties, lumber, groceries, cookstoves, crockery, tinware, liquors, and the transient population of the terminal town: gamblers, workers, harlots, hunters, migratory shop and saloonkeepers, peddlers with their packs, and straggling settlers' families. Work was pushed, and Laramie was not long the end of track. But the steep grade over Sherman Hill and the barren desert land to the west forecast the need of railroad shops and warehouses at Laramie. Additional settlers came to the new town, and the gamblers and keepers of brothels and saloons quickly saw their business opportunity.

Early in May a provisional government was formed and a mayor and trustees elected. But the lawless element had learned from vigilantes in other terminal settlements the value of union, and in Laramie it organized first. After bucking the outlaw organization three weeks, the government resigned. The period of anarchy that followed was something more than casual outlawry. Brawls and shootings were commonplace. In August a hesitant vigilance committee of 20 shopkeepers and railroad workers lynched a desperado, who called himself 'The Kid.' Other members of the loosely organized gang regarded the incident as a challenge and terrorized the town.

By autumn Laramie had a more stable population, and war was declared on the ruffians and bullies. Five hundred armed vigilantes planned simultaneous raids on several outlaw strongholds on the evening of October 29. Although plans miscarried, the group concentrated on the dance hall 'Belle of the West.' In the gun battle that followed, in which most of the town participated, five men were killed and fifteen wounded. Four outlaws surrendered and were banged to telegraph poles downtown.

This demonstration of vigilante strength cowed many of the lawless and they followed the rails west. Others joined the vigilantes, became the most militant advocates of law and order, and eventually controlled the organization. Out of this committee grew the second provisional government, which was chartered in December 1868 by the Dakota Legislature when it created Albany County and made Laramie its seat. Under legal guise, the outlaws again intimidated the citizenry, but the Dakota Legislature revoked the charter, dissolved the government, and placed the town under jurisdiction of the Federal courts. It remained so until January 1874, when it was reincorporated by the Wyoming Territorial Legislature.

During the period of court rule in Laramie women were first empaneled for service on a grand jury in Wyoming. The act of enfranchising women also included the right to hold office, and several months before the voting right could be exercised, Judge J. H. Howe summoned several women to serve on the grand and petit juries in the second district court in Laramie during March 1870. Wyoming's woman suffrage law had attracted attention, but the territory received its widest publicity when news of its 'mixed' grand jury got around. King William of Prussia cabled congratulations to President Grant on this evidence of 'progress, enlightenment and civil liberty in America.' Newspaper correspondents came to the frontier to watch the feminine jurors at work. Heavy veils masked the women jurors, and annoyed photographers reproduced them in caricature. The most popular cartoons showed ladies of severe mien jouncing fretting babes while hearing evidence. These were generally captioned with jingles or couplets, as:

Baby, Baby, don't get in a fury; Your mamma's gone to sit on the jury.

In the little one-story shack that did duty for store, post office, and courthouse, the six women on the petit jury heard all cases on the court docket. They found one man guilty of manslaughter, in a trial following a duel in a hotel lobby, and convicted others of misdemeanors and felonies ranging from disturbance of the peace to cattle stealing.

The first public school was founded February 15, 1869. By summer of that year congregations of the Episcopal, Methodist, Roman Catholic, and Baptist churches organized. The city's first newspaper was the Frontier Index, a tramp publication issued at Fort Sanders early in 1868; later it followed the tracks west and the presses were destroyed by a mob at Beartown. The Laramie Sentinel was published from 1869 to 1895, and several other dailies appeared spasmodically. The Boomerang founded by Bill Nye in 1881 and the Republican established by W. E. Chaplin in 1890 were combined in 1924 and have been published since as the Republican and Boomerang.

A few scrub cattle brought in by road ranchers along the Overland Trail grazed on the Laramie Plains in scattered herds by 1868. By 1870 the railroad had absorbed most of the overland traffic, and the road ranchers left the country or turned their full attention to breeding the cattle they had collected by barter or accident from the wagon trains. This turned out to be good business, and by 1871 the long queues of longhorns from Texas were stringing onto the plains. Both the rehabilitated work cattle and the longhorns did well on the grass prairies, and within a decade stories of the grass bonanza had reached the Atlantic Seaboard and Europe. Eastern and European capital came to Laramie. English gentlemen came, acquired choice ranching areas, built mansions in town, and organized their clubs. After the crash of the 1880's the 'foreigners' closed their clubs and mansions and returned to their brokerage offices in London or Edinburgh. But those who had seen hard times as road ranchers stayed on and stocked a better grade of cattle. Sheep were introduced a few years lated, and Laramie grew with the livestock industry on the surrounding plains.

Mineral outcroppings in the vicinity gave Laramie a brick and tile factory, plaster mills, an iron foundry and roller mill (destroyed by fire), a soda refinery, a cement factory, and an oil refinery. Small veins of gold were discovered in near-by mountains, and for a time Laramie threatened to eclipse the territorial capital on the other side of the Laramie Mountains. Rivalry with Cheyenne became sharper. Newspapers came to the defense of their communities, and editorial broadsides were exchanged.

A Cheyenne journalist saw Laramie in 1873 as "an example of how much better it is to walk with humble livers in content than to attempt to build a town on no more enduring foundation than a hundred western towns have had (as Bunyan says of Vanity Fair) "laid by juggling cheats, games, plays, fools, apes, rogues, and that of every kind, together with that to be seen with murderers, adulterers, false-swearers and that for nothing."' Ten years later J. H. Hayford, bellicose editor of the Laramie Sentinel, complained that 'Cheyenne gets first chance at everybody who comes to the country, and takes great pains to decry and run down the resources and advantages of our city.' It was this same Hayford who referred to President Grant as 'the most consummate ass that ever disgraced the presidential chair,' when the President removed the editor's friend from the Laramie Post Office.

Shack towns and camps appeared along the mountain gulches west and south of Laramie, where yellow metal was found. Laramie, the promotion center, was optimistic. But the deposits were too slight for intensive development, and the veins petered out. Bonded companies went into bankruptcy, and melancholy ghost towns now dot an area within a 100-mile radius of the city. Solitary prospectors who still haunt the area are dogmatic in defending the region's mining possibilities and are short-tempered with unbelievers.