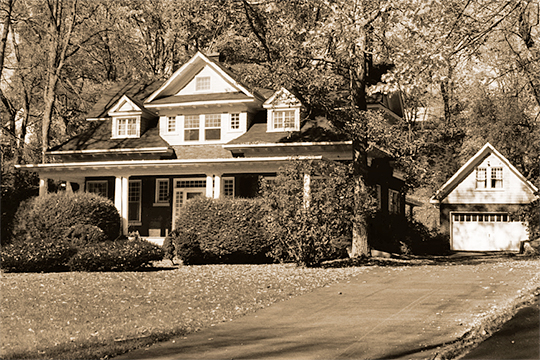 The South Bluefield Historic District was listed on the National Register of Historic Places in 1992. Portions of the content of this web page were adapted from a copy of the original nomination document. [‡]

Most of the buildings in the South Bluefield Historic District fit into the 1930 to 1940 period of development of Bluefield. They are large single family houses with broad lawns, landscaped entrances and yards. They represent mostly the revival styles of the period with many in the Colonial Revival style and the Neoclassical style. Closer downtown the Foursquare style is represented as well. Towards the east edge and along Parkway there are a number of Colonial Revival style houses, and a number of the larger Neoclassical style houses.

Closer to downtown along Oakhurst and Parkway the integrity of the period of development is well maintained. There are few intrusions, newer structures and modifications. As one moves from the downtown there are larger numbers of newer ca. 1950 residences interspersed in the area.

Architect Alex Mahood is well represented in this neighborhood. The majority of his work is in the Revival style of architecture that he usually employed.

Another prominent architectural firm in the Bluefield vicinity was the firm of M.J. Garry and R.A. Sheffey. This firm is identified predominantly in the 1923 article on Bluefield as being associated with a number of residential commissions in the vicinity.

There are a number of other styles represented in the area. One of the more prominent is the Spanish or Mediterranean Revival style. Many of the Foursquare residences are embellished with detailing of these styles. Elements of the styles that are evident include shallow pitched roofs with tile roofing; broad overhangs on the eaves; projecting pavilion entrances; single story side wings with porches on the roofs; stucco siding; wrought iron balconies; and arched openings or arcaded walls. Much of this style of structure was also designed by Alex Mahood. 1430 Whitethorn, is one of the best examples of this style. It .is a large Spanish Revival mansion in blond brick with a red tile roof. The Pedigo House is also in the Mediterranean Revival style. Mahood's own home, as well, 2306 Bland Road, is an understated Mediterranean Revival with simple detailing and stucco siding.

One of the more unique houses is 230 Parkway, the Gage Residence. This is an older Queen Anne farmhouse, ca. 1900 that was moved for the construction of an adjacent residence in 1932. The house is a two-story side gable with a corner square turret with a steep pointed roof. There is also a cupola on the front roof. There is a wraparound porch.

All of the houses are on generous lots with landscaped lawns and rear yards. The streets are tree lined and it is a very suburban setting in the 1920's Green Acres type of urban development. In all there is cohesiveness of architecture in the district that is unusual in many locales in West Virginia. There are 107 buildings in the District.

The South Bluefield Historic District contains major architectural styles of the early 20th Century, namely the Neoclassical, Colonial Revival, Mediterranean Revival, Foursquare and other styles. The area is also significant for its association with noted West Virginia architect Alex Mahood, who designed many of the structures in the district. The district is associated with the development of the area and Bluefield itself. It reflects the 1920 era boom in Bluefield's economy through its representation of a major wealthy residential neighborhood and its association with the coal wealth of the area in the boom period.

This residential section represents the later post Depression development of Bluefield. It is this neighborhood that is described in the 1939 Semi-Centennial newspaper article as the neighborhood of preference. The cover page of the residential section pictures many of the homes in this area. It is also here that many of the West Virginia Cole Realty Corporation stockholders built their mansions when they had the money. Consequently, it is also the largest concentration of Alex Mahood designed homes in the town. This would probably make it the largest concentration of Mahood buildings in the state.

The 1920's period saw one of the greatest booms in residential development in Bluefield. This was centered in the South Bluefield area. The 1923 West Virginia Realtor magazine, January issue, rated Bluefield as the 7th largest city in the State. They report that the assessed valuation of properties in Bluefield in 1923 was $23,329,282.00 and that 402 building permits were issued for new construction in 1922 and 314 in 1921. This represents a major percentage of structures in town.

The second residential boom followed late in the Depression. Bluefield managed to hold its own through these years, despite the general economic slump. The Writers Works Project describes this period as one of intense activity with considerable development and construction. This included a new sewage disposal plant and new residential sections added to the city in 1937-38. This was the South Bluefield area. An ambitious street improvement program began in 1938. Here, according to the 1939 SemiCentennial issue of the Bluefield Daily Telegraph, over 200 residences were constructed between 1934 and 1935. 50 were underway in 1939 alone in this residential section of the city.

Many of the residents of these grand homes were the bank presidents, architects, mine operators and owners, contractors, merchants, etc. who shaped the destiny of Bluefield. They were the "movers and shakers." They also were connected through the West Virginia Cole Realty Corporation in the development of downtown Bluefield and the West Virginia Hotel. Through the vision and cumulative importance of these prominent residents the face of South Bluefield was changed forever. Many of the prominent residences are those of stockholders and officers in the company.

Some of the more prominent persons in the district include Dr. Wade St. Clair and Dr. Francke Fox, site M168. Dr. Fox came to Bluefield in 1892 as a surgeon for the N&W Railroad. He began the Bluefield Sanitarium with Dr. St. Clair in 1921. It was one of the first private institutions in Bluefield. Dr. St. Clair had site 207 constructed for him in 1916. Dr. St. Clair was born in Virginia in 1877 and graduated from the University of Virginia in 1900. He relocated to Bluefield after spending his internship in New York City as a surgeon.

The Feuchtenberger Family is associated with the District. They built and operated the Feuchtenberger Bakery in Bluefield for many years. The bakery's name was changed during WWII to Betsy Ross Bakeries, it is said, due to the sentiment against Germans in this country. The bakery later became a successful regional distributor.