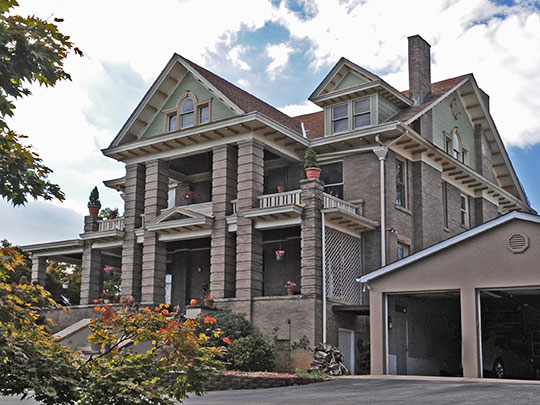 The Edgewood Historic District was listed on the National Register of Historic Places in 1989. Portions of the content on this web page were adapted from a copy of the original nomination document. [‡] .

The significance of the Edgewood Historic District lies in its origins, its outstanding architectural styles and the contribution of its many residents to the history of Charleston and the State of West Virginia. Edgewood was an important community planning and development project for the city of Charleston during a period of tremendous change. Edgewood was the first subdivision in the city with streetcar service, making it readily accessible to everyone. Additionally, the extensive network of sidewalks and streets further aided the expansion of the area, attracting home buyers from all over the city.

The Edgewood Historic District is distinguished because it was the first planned subdivision in Charleston. The growth of population and industry caused Charleston to expand its boundaries ineluctably towards Edgewood. The 1910 prospectus printed by the Edgewood Company called Charleston the "busiest little city south of Pittsburgh." Estimates were that the population of Charleston would double, if not triple, within five years. As the industrial center of the state, Charleston offered opportunities that attracted thousands to the Kanawha Valley. Federal Census figures in 1900 showed Charleston's population to be 11,099; by 1930 it had jumped to 39,998.

Charleston had numerous manufacturing concerns like the Kelley Axe Factory, which employed nearly 1,000 men; the Agnew Electric Company; the Baldwin Steel works; and many others. In 1910, Charleston had the largest wholesale business of any city south of the Mason-Dixon line. The city's boundaries had already expanded north, south and east. Edgewood, to the west, offered a solution to the problem of overcrowding and increased congestion downtown.

At the turn of the century, Edgewood was a unique concept. Each house was equipped with natural gas, electricity, and water pressure. Edgewood Drive, the heart of the development, wound a full mile and a half from Charleston Street (now Washington Street) to the Edgewood Country Club. The streetcar, which ran alongside the drive, made transportation accessible to everyone, residents and visitors alike. A cave beside the drive was converted into a waiting station, complete with seats and electric lights, for prospective passengers. One attraction was the popular Carr Lithia Spring, on Edgewood Drive. Its waters were used for drinking and medicinal purposes.

Many enticements beckoned the buyer to invest in Edgewood. Developers offered large tracts of land at reasonable prices. For both homeseeker and investor, Edgewood gained a reputation as the "showplace of Charleston." With the nearby country club and the Luna Amusement Park, owned b the Kanawha Valley Traction Company, Edgewood saw an influx of people from all over the city.

Careful planning was employed in both the architecture and the layout of the lots in Edgewood. Many houses are situated at steep elevations, affording panoramic views of the district and the city of Charleston, and harmonizing with the surrounding environment. The architectural influences are eclectic, creating an unusual collage of designs. The view of Edgewood Drive, where the oldest houses stand, offers architectural examples ranging from Neo-Spanish Colonial to Bungaloid, from Greek Revival to Late Victorian.

The Guthrie house, which is the oldest in the Edgewood Historic District at 849 Edgewood Drive, was built in 1907. August Guthrie was Vice-President of the Edgewood Land Company. According to his daughter, Miss Frances Guthrie, her father chose to build his house in Edgewood because it was a peaceful and secluded place to bring up his children. Even today, long after the original rural atmosphere has disappeared, the feeling remains that Edgewood provides a retreat from the hustle and bustle of downtown Charleston.

Although the number of houses within the neighborhood increased greatly between 1940 and 1950, the original lots were not broken up to make room for them. Houses have been built on hills, and properties terraced, as can be seen in the land surrounding the Neo-Spanish Colonial house of George Couch at 846 Edgewood Drive.

At 835 Chester Road, situated at the crest of a hill overlooking the West Side of Charleston, is the Woodrum-Methany House, a fine example of the best of Edgewood (and of Bungaloid architecture). Vistas like these, from the rolling hills throughout the neighborhood, are one of the most striking features of the Edgewood Historic District.

A number of houses were designed by regionally well-known architects, among them Wilbur T. Mills and H. Rus Warne, and built by fine builders like John and Euell Woodrum. Mills, of Columbus, Ohio, patterned the Adler-Bazzle House (906 Edgewood Drive) after a Frank Lloyd Wright home in Switzerland; Warne designed Charleston's City Hall (501 Virginia Street); and the Woodrums developed the "Woodrum Partition" on Chester and Lower Chester Roads.

Fine detail and craftsmanship are displayed in the interiors of many of the homes, which have cherry, mahogany, and oak woodwork, beveled glass and quarter-inch sawn oak floors. The exteriors of the houses exhibit master brickwork and the work of Italian stonemasons, who immigrated to the area after World War I. Finally, the variety of styles demonstrates the ebb and flow of architectural influences prevalent during the early twentieth century. The wealth of diversity, from Craftsman to Neo-Colonial, Tudor to Neo-Spanish, give the Edgewood Historic District a flavor all its own.

Other prominent citizens involved in Edgewood included Buckner Clay, President of the Edgewood Building Company, and J.E. Chilton, Vice-President of the Company, whose families were among Charleston's most established at the time and are still involved in the Charleston newspapers. These men and other prominent lawyers, doctors, merchants and entrepreneurs are of cumulative importance to the community's development. They and their families represent the class of citizens who played an integral part in shaping the evolution of the Edgewood Historic District.

The real estate development that continued throughout the years 1950 to 1970 has encroached somewhat upon the original borders of the neighborhood, breaking up the continuity. However, the vast majority of the Edgewood Historic District's homes and their settings continue to convey a sense of historic and architectural significance. In addition to these factors, residents of the neighborhood are keenly interested in the preservation of Edgewood.