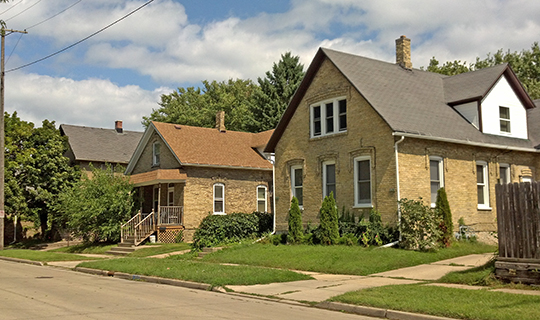 The Northside Historic District of Cream Brick Workers' Cottages was listed on the National Register of Historic Places in 1994. Portions of the content of this web page were adapted from a copy of the original nomination document. [‡]

The Northside Historic District of Cream Brick Workers' Cottages includes portions of eight blocks in a residential section of the city of Racine which is bounded (roughly) by Goold Street on the north, English Street on the south, Chatham Street on the east, and Erie Street on the west. It contains the greatest concentration of cream brick workers' cottages in the city, as well as a peppering of frame workers' cottages. Almost all of them were built between 1881 and 1913 for families who worked in Racine's burgeoning industries.

The district is only a section of a much larger, north side neighborhood which began to develop along Lake Michigan just to the north of Racine's original city limit at St. Patrick Street during the period of Racine's industrial expansion in the last half of the 19th century and the first few decades of the 20th.

The cottages are almost entirely front-gabled and they create a fairly orderly, saw-toothed pattern of rooflines against the sky. They are nearly all one-and-a-half story houses which are set back approximately the same distance from the public sidewalk, with a strip of lawn in the parkway between the sidewalk and the street and with a ribbon of lawn that is not much wider between the sidewalk and the front wall of each house. Only a few porches or stoops and one building protrude to break the regularity of the building line. Shrubs and evergreens often landscape the foundations, and a few tall trees—mostly pine—are interspersed among the buildings, while both young and mature deciduous trees grow within the parkways lining the streets.

Brick or frame, the cottages constructed between 1881 and 1913 were rectangular and front-gabled in form, often with gabled wings or additions on one side or the other which created either "L" or "T" plans. They were vernacular houses with architectural detail that was usually Italianate in style. Many of the frame cottages built in the district after 1900 display the influence of the Queen Anne Style. Two of the brick cottages built late in the period were obviously influenced by the conventions of the Colonial Revival. All of them have fully excavated basements and foundations of rubble stone, randomly coursed ashlar, or brick. Today, their roofs are clad in composition shingles, but originally most of them were shingled with shakes. Their windows were almost always double-hung with divided panes (usually 2/2, but other patterns were also used).

A number of them have front or side porches, many of which were added after initial construction in a variety of the domestic styles which became popular during the historic period. Some of the porches have had their posts, railings, and balusters replaced with newfangled wrought iron, and here or there a metal awning inappropriately obtrudes or modish window units have been retrofitted, but basic lineaments have survived, even on those cottages which do not otherwise contribute to the historic character of the district.

It is the cream brick cottages that dominate the district and generate its historical atmosphere—probably because most of them have changed relatively little since they were built. Brick is so much less mutable than frame. All but four of the frame cottages from the period have been sided with one or another of the exterior coverings that became popular alter the 1930s "slate" siding.

The cottages differ among themselves in size and plan, and here or there, in the pattern of their brickwork. Almost all of them have brick set in common bond, but a few were built in stretcher bond. Such differences are minimal, but what does stand out on the cottages themselves is their principal architectural decoration—the arches and hood moldings over their windows and doorways on the street front and usually on either side as well. The older the cottage, as a rule, the higher the relief of the brickwork on its hood moldings. Near the end of the 19th century, the moldings generally became shallower, although they were still raised, they became more planar. By the turn of the century they disappeared entirely.

There are several common patterns of brickwork. One of the oldest can be seen at 1928 North Wisconsin, built in 1881. Soldier bricks radiate from the inside arc of each segmentally arched opening. Every other soldier is angled forward to meet a row of headers outset in a concentric line above them. Finally, another row of headers set one step farther out arcs in a thin drip molding above them. The same pattern can be seen at 2003 and 2015 North Wisconsin, which were built in 1885 and 1888. Variations of the pattern can be seen at 2009 North Wisconsin (1884) and 1919 Erie Street (1881). Canted soldier bricks are set as keystones, with headers defining the concentric arcs.

All of the contributing cottages appear to have been built initially in a basic, rectangular plan that was conventional for Racine workers' cottages. Most of them were added to and evolved into "L" or "T" plans, which was the usual pattern during the historic period.

All but a few are typical, one-and-a-half-story cottages with low foundations and gabled roofs oriented towards the street. Two windows and a doorway (or three windows) are evenly spaced along the first floor front. A single window (occasionally two or three of them) is centered within the attic gable. "L" and "T" plan cottages have a wing on one side, usually gabled, which normally has two windows on the first floor and a small window or vent centered above them under the peak of the gable.

Most of the cottages in the district were constructed of locally manufactured, cream colored brick. Some frame cottages are interspersed among them. Foundations are stone or brick, and roofs are usually covered with composition shingles or roll roofing. The materials are typical of the property type and of the historic period.

The cottages stand on the lots where they were originally built—in a residential, working-class neighborhood of Racine not too far north of the commercial center of the city.

Most of the cottages exhibit the influence of the Italianate Style, as was traditional for the type. A few, however, display variations, and some show the influences of later architectural styles that were popular in Racine during the latter part of the historic period.

The development of Racine's industries brought with it the problem of housing workers. Because of the diversity of its factories, Racine never became a company town. There were only two attempts at company housing for workers and both were limited and never imitated. The working people of Racine found housing for themselves, for the most part, in modest cottages which dotted the grids of newly platted subdivisions as the city expanded. The houses were small, but soundly built in frame or brick; and since Racine did not grow into a metropolis, most of those cottages were not torn down and replaced by multi-storied slums. Neither were they turned into tenements by crowding them on the same lots with additional dwellings. Many of them still line the streets of older sections of Racine, and the greatest concentration of them is to be found on the north side, along the streets from Lake Michigan west to Memorial Drive and from the Root River north to Goold Street.

The Northside Historic District of Cream Brick Workers' Cottages comprises a small portion of that area, but it has the largest concentration of cream brick workers' cottages in the city. They were built for and owned by people who worked in Racine's industries, not for or by their employers or companies. (They were built expressly for people like William Riegelman, a wagon maker at the Pish Brothers Wagon Company, who built the first cream brick cottage in the district at 1919 Erie in 1881. Wencel Witpil, a shoemaker at the Joseph Miller Company, who built both 2019 North Main in 1885 and 2003 North Main in 1911; August Stiewe, who worked at the J. I. Case Plow Works and built 2006 Chatham in 1889. Charles Kranzusch, who was a teamster for the Klinkert Brewing Company and built 2041 Erie Street in 1894; Anthony Hettrich, who was a delivery man for the Porter Furniture Company and built 2063 Erie Street in 1904.

Not all the companies for whom people worked are listed in city directories. Any number of those who built houses in the district are listed merely as "laborer," an occupation which might not qualify for the social status of "homeowner" in many of America's industrial cities during this period. But there were other homeowners in the district who were teamsters, boilermakers, wagon makers, woodworkers, watchmen, tanners, masons, brickmakers, carpenters, shoemakers, clerks, machinists, painters, carriage trimmers, dyers, blacksmiths, trunkmakers, firemen, moulders, sailors, and boxmakers. The houses were lived in and owned by a diverse population of workers in Racine's equally diverse industries. These people may not have been historically significant individually, but they were essential as a group to the industrial development of Racine. Some of them possessed skills or performed jobs that are now only a part of American industrial history. This district comprised of their houses is significant in recalling them, their skills, and their neighborhood.

The Northside Historic District of Cream Brick Workers' Cottages contains a concentration of examples of a particular type of locally historic, vernacular building which was constructed in Racine during a specific period in the industrial growth and development of the city—a Racine worker's cottage. Most of the contributing cottages in the district are also architecturally significant because they were built of an historic local building material—the cream colored brick which is indigenous to Southeastern Wisconsin and was manufactured in Racine from 1839 to 1914. In a district such as this, the vernacular building type and the historic building material are particularly distinctive and are more precisely evocative of their historic period, although some of the resources may lack individual distinction. The district also contains several cottages in frame, like 1922 and 2033 North Wisconsin Street and 510 Yout Street, which are interspersed among the cream brick cottages and are architectural resources for comparison and contrast with them. Finally, the district is enriched by four brick cottages which are variant styles: 2013 and 2019 Erie Street and 2003 and 2017 North Main. They are brick workers' cottages from the period which are architectural foils that physically and visually contrast with the traditional cream brick workers' cottages and thereby more sharply define them.

Some of the cottages in the district are owned by direct descendants of the original owners or by close relatives of the original owners. They are proud of their houses and take good care of them. In the past ten years more and more people have bought cottages because of their history, and they have become somewhat fashionable. The owners, in general, seem appreciative of them, respectful of their tradition, and careful in maintaining them.