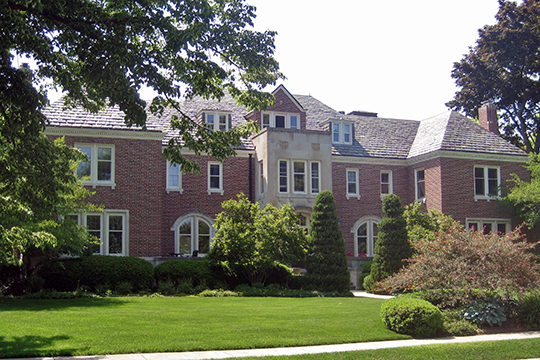 Kenosha, a highly industrialized city in southeastern Wisconsin, lies along the shore of Lake Michigan north and south of the point where Pike's Creek enters the lake. Compact and trim, its streets running in an orderly fashion, Kenosha spreads out across the flat level of the land, broken only by the narrow, slow creek widening into a small harbor at its center. One factory stands on the harbor's edge, a long, dark building shadowing the yacht club basin, where slim sailboats and fishing dories anchor side by side. The long lakefront is a series of pleasant green parks that overlook wide waters and the passing bulk of freighters and steamers. On misty days the sound of a foghorn cuts through the air, and the smoke from tall factory smokestacks hangs low over the city.

The costly homes in deep gardens along 3rd Avenue near the lakefront reflect the prosperity of Kenosha. North of the creek and back from the lake parks are the substantial and neat homes of the Italian workers employed in the large factories. In their own business sections there are small wooden flower stalls, restaurants and cafes. The main business district consists of a few blocks along 6th Avenue in the midtown area and branches west and north beyond the bridge. West of it, covering 5 blocks, stands the formally landscaped Civic Center. Beyond are the long, even blocks of tree-lined residential streets.

Kenosha, an industrial town manufacturing such products as machinery, autos, beds and hosiery, has a population derived largely from the immigrant factory workers who came here in the 1900s. More than 64% of the people are foreign-born or of foreign-born or mixed parentage. Of these, Germans, Italians and Poles are the most numerous.

Kenosha began modestly and grew without spectacular changes. In December, 1834, the Western Emigration Company was organized at Hannibal, Oswego County, New York, for the purpose of settling a colony on land in the newly opened West. Shares sold for $10 and representatives were sent to purchase sites on the western shore of Lake Michigan, then considered the most desirable section of Wisconsin. The buyers found the price for land too high at Milwaukee, failed to negotiate at Racine, and made no purchase. The agents having returned East, the company then appointed John Bullen, Jr. as its sole agent. In June, 1835, Bullen arrived at the mouth of the Pike River. Wilder and deeper than it is now, the river had two outlets a mile apart. The southern outlet was called Pike Creek, and Bullen, seeing the possibility of creating a lake port at the latter site, claimed land there.

Eight New York families came to Pike Creek in the summer of 1835, settling either as farmers in the fertile country beyond the lake plain or as the first members of a new village lying along the small harbor. The financial failure of the Western Emigration Company in the first winter left no organization to settle land claims between the rival squatters, and many disputes occurred. This resulted in the formation of a Pike River Claimant's Union in February 1836, with a board of arbitration that assumed local jurisdiction. Soon this union merged unto the larger Milwaukee Claimant's Union.

By the fall of 1836 the best prairie groves of the surrounding country were occupied by New England farmers. Wheat was then the most marketable crop, and the prairies and meadows were quickly plowed and planted to it. Timber in this area was scattered and difficult to transport; consequently, the new farmers had to buy sawed lumber for their homes and farm buildings. The villages of Racine and Pike Creek competed for this commerce—wheat to be exported by the lake steamers to the East, lumber to be imported into the new West. But the first cargo-bearing boat that arrived at the Pike River, in July, 1835, was unable to dock. The water was so rough and the channel so uncertain that the lumber had to be thrown overboard, floated to shore, and there picked up by anxious villagers. During the next few years passengers from steamboats had to be brought to shore in small scows or lighters; whole cargoes were occasionally ruined in storms; valuable commerce in wheat and lumber were lost because Pike Creek had no suitable harbor. Aroused by the urgent need for a harbor, in 1837 the 150 citizens of Pike Creek raised money to send a representative to Washington to ask for Federal appropriations for dredging the creek. Although this effort failed, Pike Creek hopefully changed its name to Southport and continued to man the lighters every time a steamer made its appearance.

The village grew very slowly; in 1840 its population was only 337. In 1842, B. F. Calhoon, at his own expense and despite the ridicule of rival towns, completed a wharf that reached some distance out into the lake, at which boats and steamers could dock. This and subsequent piers allowed Southport to share in the exportation of wheat and lead and the importation of lumber. That year marked the upturn in Southport's growth; by 1843 the population had increased to 1,132 and in the same year 165 buildings were erected.

The year 1844 marked the beginning of a number of Federal appropriations for harbor improvements. With each successive appropriation the volume of export and import business increased. Despite the growth of lumbering and rise of population to 3,455 in 1850, growth was slow. The completion of the Lake Shore Railroad through the city in 1855 had the immediate result of suddenly increasing harbor traffic; it was only later that the railroad stripped the harbor of its usefulness. But for all the improvements and the general civic concern for lake commerce, Southport's harbor was small and dangerous compared with Milwaukee and Racine harbors; consequently, relatively small amounts of merchandise came to its port.

In 1850 Southport changed its name to Kenosha (an Indian word for pike or pickerel) and was incorporated as a city; it was made the seat of the newly-created Kenosha County. During the few years following 1850 political and religious refugees from Germany came to Wisconsin, and some settled in Kenosha. Their influence, combined with that of the Easterners who had first settled here, kept the city alive with lyceums, lecture courses and partisan discussions of the controversies of the day. Many families subscribed to four or five newspapers and pamphlets, liberal social measures were freely advocated and the anti-slavery doctrine was almost universally accepted. Prominent citizens, workers and seamen were united in forming a Kenosha station of the Underground Railroad.

The removal of the Chicago Brass Company to Kenosha in 1886, the expansion of the present Simmons Company from a small cheese box factory to the Northwestern Wire Mattress Company, and the founding of the Chicago and Rockford Hosiery Company in 1893 established Kenosha as a manufacturing center. By 1900 the population had risen to 11,606 with more than 3,000 persons engaged in industry. In the same year the Thomas B. Jeffrey Company, makers of Rambler bicycles, was added to the growing list of factories. By 1910 the population almost doubled, reaching 21,371 and a third of the people worked in the plants. In large part the increase was due to the immigration of Italians and Poles, and smaller numbers of Lithuanians, Russians, Czechs and Bohemians who had been establishing themselves in Kenosha between 1895 and 1910. Kenosha rose from sixth to third place in the State as a manufacturing city.