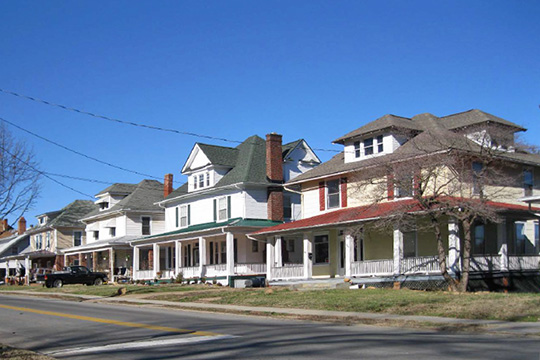 The Riverland Historic District was listed on the National Register of Historic Places in 2013. Portions of the content on this web page were adapted from a copy of the original nomination document. [‡]

The Riverland Historic District developed as an early twentieth century residential suburb that provided essential housing for workers employed by nearby industries. The neighborhood is located less than a mile south of downtown Roanoke, connected by the Walnut Avenue Bridge, which crosses the Roanoke River from Jefferson Street to the southwest corner of the district. Due to its proximity to the downtown area, no commercial buildings existed in the district historically. The district overlooks a number of the industries that employed its initial residents. Vestiges of the American Viscose Plant, the Norfolk & Western Railway shops, and the Roanoke Iron & Bridge Company are visible across the river from the neighborhood.

The district is nestled between a bend in the Roanoke River and the base of Mill Mountain. The land is relatively flat near the banks of the river, but slopes upward as it approaches the mountain situated to the south of the district. Walnut Avenue SE connects the district to the downtown area. Riverland Road is also a major thoroughfare, which runs west-east to connect southeast Roanoke to Franklin County. The streets within the district are arranged in a grid pattern with alleyways along the rear lot lines. The houses are situated on narrow rectangular lots and have a uniform setback. The streetscape features elements such as sidewalks and curbs, with street trees planted in the grassy areas between. The coherent nature of the streetscape creates a strong sense of place within the district.

Most of the resources in the District are single family dwellings since the district developed as a residential suburb. The houses were mostly built between 1900 and 1960. Eleven houses precede the development of the area by the Highland Company in 1913. The majority of these residences are located along Walnut Avenue and Riverland Road, on the blocks closest to the bridge. It is reasonable that the earliest development would have occurred in this area since it was closest to the streetcar line and to the downtown. [See: Streetcar Suburbs, 1888 to 1928] These early houses provide good examples of Queen Anne and Colonial Revival styles.

The N & W Railway continued to be a major driver for Roanoke's economy and development. As the largest employer in Roanoke, the N & W had over 5,000 employees by 1922. The railway's machine shops, established in 1882 along the tracks in Southeast Roanoke, grew to become the largest industry in the area, producing locomotives and freight cars for the N & W. Another key industry was the Iron & Bridge Works, established in 1895 on the west side of the Roanoke River, across from what would be the Riverland neighborhood. This industry employed several hundred workers in the manufacture of structural iron for use in large buildings and bridges.

In 1915, Roanoke annexed a portion of land along the north side of the Roanoke River in Southeast Roanoke. Two years later, the American Viscose Corporation was established on 212 acres. The plant manufactured rayon and was a key supplier of American troops during World War I. With an initial employment roll of around 1,000, the plant grew to 5,000 employees by 1928, rivaling Norfolk & Western as a key Roanoke employer and reported to be the largest manufacturer of rayon in the world. The new plant rapidly expanded, adding a second unit to the plant in 1919. Its location in Southeast Roanoke, coupled with this growth, focused much new construction in this part of the City, at a time when the wider City's population grew 45 percent between 1910 and 1920. The Viscose plant also provided jobs for women, even constructing a women's dormitory on the property for young women from outlying rural areas. The 1920 U.S. Census indicates a greater number of women in employment, and by 1940, 32 percent of working-age females in Roanoke were in the labor force.

These large industrial and railway employers spurred the development of residential neighborhoods to provide worker housing in the area surrounding them. The Riverland area was proximate to many of these and to downtown Roanoke; indeed several industries were visible from the neighborhood. In the late 1800s, the Roanoke Gas & Water Company owned the lands of the Riverland neighborhood area. In 1890, the company planned for the extension of Walnut Avenue and Jefferson Street across the Roanoke River to connect the company lands to downtown. An 1891 map of parks and streets, prepared by Roanoke Gas & Water Company for the southern portion of Roanoke, shows the Riverland area and adjacent neighborhoods at the base of Mill Mountain fully platted. In 1890, the South Roanoke streetcar line began running south on Jefferson Street to the Roanoke River. The line was continued across the river by the creation of the Walnut Branch in 1893. A later extension of the line from Walnut Avenue to Belleview Avenue provided streetcar access to the area that became Riverland. By 1924, seven cars alternated over the Jefferson and Walnut lines at ten-minute intervals.

Though a 1905 plat by the Gas & Water Company again shows the full area divided into residential lots aligned along rectilinear streets, a 1907 photograph of the area shows the area at the base of Mill Mountain as still largely undeveloped. In 1911, the Roanoke Gas & Water Company sold the lands to the Highland Company, a land development company, for $1,800. The President of the Highland Company, S.D. Ferguson, was heavily involved in Roanoke's early development boom, having been a charter member of the Roanoke Construction Company in 1886, and involved in the merger of the Roanoke Water Company and Roanoke Gas Company in 1889.

Deed records indicate that the Highland Company began selling lots in Riverland in 1913, selling 26 lots in the first two years. Sales slowed until 1923, when a further 34 lots were sold between then and the Great Depression. Deeds carried a number of restrictions, including that buildings had to cost more than $2,000 and that there be 25-foot front setbacks. Most of the dwellings were built between 1915 and 1925. Roanoke city directories indicate that Riverland Road was first to develop; followed by Arbutus Avenue, and these streets were well developed by the early 1920s. Walnut Avenue was later to develop, toward the end of the 1920s. Most of the district was annexed by the city in 1915, though the area east of Ivy, along the riverfront and Arbutus Avenue, was not annexed until 1943. By 1930, approximately 90% of the houses in the district had been constructed.

The Great Depression saw the Roanoke population remain stagnant, with only a 1 percent increase in the population between 1930 and 1940, compared to the national average of 7.9 percent. A large proportion of the Viscose Plant employees were laid off, and only a small staff kept the plant in operation through the worst of the Depression. The local economy, however, was bolstered somewhat by the Norfolk & Western Shops as they received record orders during the 1930s.

The 1940 Census records provide a snapshot of the Riverland area residents at the time. Residents were white, and nearly two-thirds of the homes were owner-occupied. The neighborhood was stable, as most residents had lived in the same dwelling for at least five years. Levels of education among the heads of households varied, but over half had at least some high school training, and large numbers of them worked at the nearby employment centers, including the Viscose Plant, the steam railway, or the streetcar company, while others worked in sales or in skilled trades as mechanics, painters, or plumbers.

The American Viscose Plant closed in the fall of 1958, leaving nearly 1,800 residents without jobs. Around the same time, the N & W railway retired its use of steam engines, resulting in a loss of about 10 percent of jobs at the machine shops. Unemployment in Roanoke exceeded ten percent for the first time since the Depression.

Today, the neighborhood remains a desirable residential area owing to its proximity to downtown and other shopping, employment, and recreation areas. Its proximity to Mill Mountain and the Blue Ridge Parkway make it highly visible to Roanokers and visitors traveling to and from these recreational areas.