Photo: Home in the Poplar Lawn Historic District, Petersburg, VA. The Historic District was listed on the National Register of Historic Places in 1980 and 2006. Photograph by User:Missvain, 2011, (own work) [cc-by-3.0 (creativecommons.org/licenses/by/3.0)], via Wikimedia Commons, accessed January, 2014. 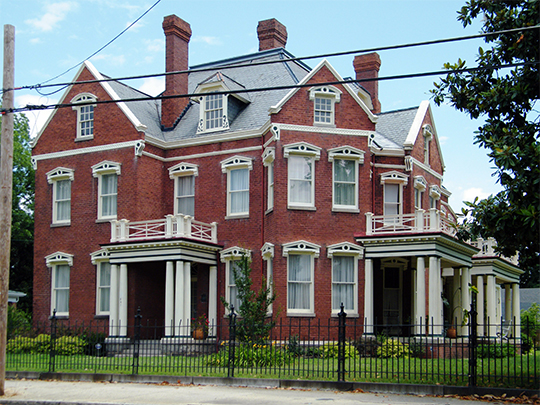 The Poplar Lawn Historic District was listed on the National Register of Historic Places in 1980. Portions of the content on this web page were adapted from a copy of the original nomination document.

The Poplar Lawn Historic District is a 19th-century residential neighborhood centered about a two-block public green and historically was the site of notable military and social events in Petersburg. In response to growth patterns established in the late 18th and early 19th centuries, most of the parkland and areas now defined by the historic district were annexed to the City of Petersburg in 1816. Within the district the annexed land includes the area south of Marshall and east of South Sycamore Streets. Though the site of public recreation as early as 1800, it was not until 1846 that Poplar Lawn, as the park was known through most of the 19th century, was purchased by the city. The property was acquired for $15,000 from George W. Bolling.

In spite of the construction of several large upper middle class homes in the area, the neighborhood was slow to develop. Editorials in the Daily Southside Democrat appeared in 1854 bemoaning the condition of The Lawn. One tersely noted, "The Lawn, at once the muster ground and the mulery of a great and growing city, is now a den of cows, and the noble, long-eared animals have surrendered their fair possession to inglorious kind." Little was done to improve the park until the planting and landscaping of 1869.

In a controversial move in 1871, city fathers proposed extending South Adams Street through the park to Fillmore, subdividing and selling land west of South Adams and east of South Sycamore Streets. Public pressure against this move remained strong and the project never came to fruition.

Realizing the public usefulness and appeal of Poplar Lawn, the city did an about face, setting aside funds to clean up and improve the park land in 1873. These plans called for the construction of a small lake in the lower section, directly across from St. Andrews Street. By 1874 the lake was enlarged and stocked with goldfish, and Poplar Lawn had completed its transformation from a "den of cows" to a "place of resort for the ladies and children of the city."

The last and most significant improvement of Poplar Lawn occurred in 1875. At this time funds were appropriated for the planting of 500 trees on Poplar Lawn at a cost of $100. It was probably during this year also that irregular paths were laid out in rough, concentric and radiating patterns. The plan of the park reflects the popularity of landscape theories practiced by Frederick Law Olmsted during the second half of the 19th century.

Considering 20th-century growth patterns within Petersburg, the District is fortunate in retaining much of its character as a 19th-century residential neighborhood. With minor exceptions, the entire District maintains a consistent 2 to 2-1/2 story scale. While there is a handful of 20th-century, single-story buildings, no structures break above 2-1/2 stories, providing a consistent roofscape within the District's boundaries.