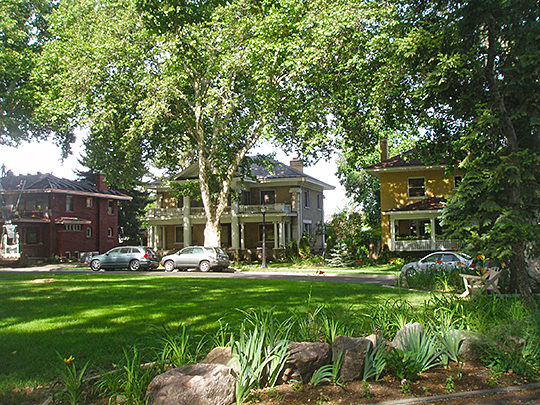 The Eccles Avenue Historic District was listed on the National Register of Historic Places in 1976. Portions of the content on this web page were adapted from a copy of the original nomination document. [‡] .

Continuity in design was accomplished by utilizing Wrightian decorative motifs on nearly every home. In addition, brick, stucco, paint and shingle colors were coordinated. Most of the dwellings were built by the same contractor, Mr. Meade, resulting in consistently good workmanship and unity in execution of the designs. That all aspects of the neighborhood were designed along thematic lines is obvious as one travels through the district.

Many prominent families lived within the District. The Eccles, Browning, Wattis, Kiesel, Houtz and other families whose names are associated with the District's homes were prominent in the business, civic and cultural affairs of Utah. Through the principles of hard work, thrift, and complete independence from outside capital, David Eccles, who came to the United States destitute, founded 54 separate businesses and earned the reputation of Utah's "Wealthiest Citizen." After the death of David Eccles in 1912, his son Marriner carried on in the same tradition as his father. Yet the depression of the early 1930s brought a complete change in the economic philosophy of Marriner Eccles. Called to Washington and appointed Governor of the Federal Reserve System by Franklin D. Roosevelt, Marriner became perhaps the strongest leader of a revolution which produced an economic philosophy based on deficit spending during times of depression. He advocated government interference to manipulate the economy, a departure from his father's generation of individualistic, laissez faire beliefs.