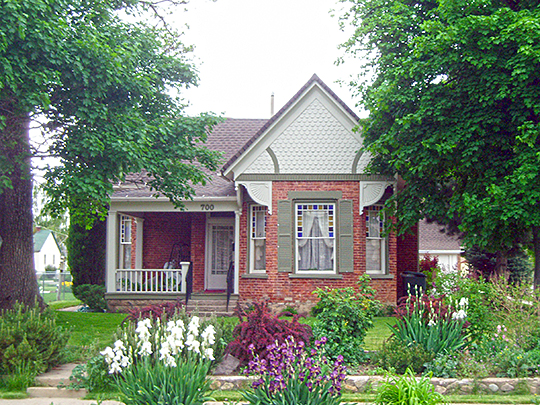 The first European-American settler of Ogden, Miles Goodyear, built a fur trading post in 1845 on an attractive spot of the Weber River, not far from where the Weber and Ogden Rivers converge. In 1847 he sold the property to Captain James Brown, a one-time leader of the Mormon Battalion. Soon after, numerous Mormon families started to migrate to the area. In 1850 Brigham Young, President of the Church of Jesus Christ of Latter Day Saints, established the basic plan for the city. More Mormon families were sent to settle the area, and in 1851 Deseret incorporated the city of Ogden, with Lorin Farr being called to serve as its first mayor. Later in 1851, Henry Sherwood surveyed the streets, blocks, and lots as planned by Brigham Young. An early Ogden journalist noted, "Those who planned the future of Ogden intended that the city should be a mile square; that they made the blocks to contain 10 acres, divided into 10 lots of one acre each; the blocks were 660 feet square and the streets were 99 feet wide excepting Main Street (Washington Boulevard) which was 132 feet wide; the first plat provided for 56 blocks, arranged in seven rows of eight blocks each."

Ogden Valley's geographical make-up played an important role in the early settlement of the city and subsequent development in the Central Bench District. On the eastern border of Ogden lies the Wasatch Mountain Range, with the Weber and Ogden Rivers flowing through it and emptying into the Great Salt Lake, lying just west of the city. In the early 1850s as Mormon families began to move to Ogden in large numbers, the most desirable land was that which was located between the two rivers in the northwest corner of town, with its rich soil and easy irrigation. A good portion of the area was surveyed into farming tracts and large numbers of people settled portions of the riverbanks. By the mid-1850s this desirable portion of town was largely populated and the community started to look eastward for expansion. And in 1855, under the direction of Isaac N. Goodale, appointed by Brigham Young, construction of the Ogden Bench Canal had begun. Canals and irrigation ditches were a common feature in almost all Mormon platted towns.

The building of the canal was an important endeavor, as an editorial in the Ogden-Standard Examiner stated in 1945, "The story of the Ogden Bench Canal is pretty much the history of early Ogden." The purpose of the canal was to use the canyon streams east of Ogden to provide irrigation to the bench area in order to sustain the newly developing community. Running north to south the canal flowed from the northern tier of the city (at the time 21st Street) to the southernmost boundary (28th Street), and from east to west it cut through just below 2nd East (Van Buren Avenue) and ended up near Green Street (Monroe Boulevard). Another important early canal was the Weber Canal.