Photo: Home in the Ferger Place Historic District, Chattanooga, TN. The Historic District was listed on the National Register of Historic Places in 2004. Photographed by User:Nflhomeboy (own work), 2011, [cc-by-1.0 (creativecommons.org/publicdomain/zero/1.0/deed.en)], via Wikimedia Commons, accessed January, 2016. 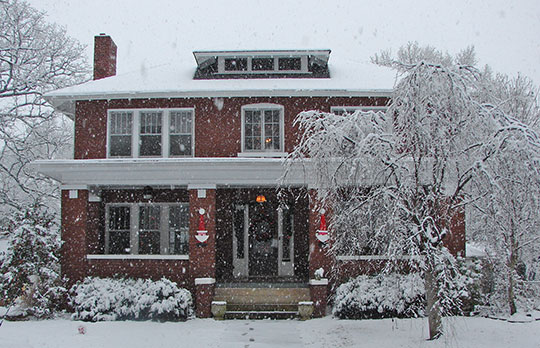 The Ferger Place Historic District was listed on the National Register of Historic Places in 1980. Portions of the content of this web page were adapted from a copy of the orginal nomination document. [‡]

Ferger Place is an early twentieth century "restricted private park" or subdivision. At the time of its development, Ferger Place was conveniently located to the city of Chattanooga but barely inside its boundaries in a relatively rural area. Today Ferger Place is considered an inner city neighborhood located approximately one and one half miles from the heart of the downtown business section. It contains 69 residences arranged in a horseshoe shape with the connecting street named Evening Side Drive on the western side and Morning Side Drive on the eastern side. These streets were originally named Hickory and Holly until a neighborhood contest in the mid-1910's resulted in their names being changed.

A sense of cohesiveness in the district is created through the exclusively residential nature of the area and a horizontal continuity is created through uniform setbacks, original sidewalks, and the tree shaded streets. The primary feature which sets this area apart from the surrounding areas, which contain more deteriorated housing and commercial activities, is the non-traditional "U" street pattern which provides a sense of inclusion and isolation from the surrounding areas.

When this subdivision was developed as Chattanooga's first "restricted private park", the area was in a relatively rural area. Although transportation was readily available to the downtown area in the form of nearby streetcar lines, there were numerous farms in the surrounding area which necessitated the use of entrance gates which kept the farm animals outside. Over the past fifty years, numerous residences were constructed in Ferger Place with the peak building period occurring between 1915 and 1930. After this, few residences were built until 1960. At that time, several residences were constructed on the available vacant lots within the district. Currently, the neighborhood is well maintained, and most residences appear to be in good or excellent condition with on-going rehabilitation efforts. Although the entire area is zoned Single Family Residential, there are some duplexes and apartments in the neighborhood.

Currently, the physical conditions of the majority of the residences in Ferger Place are very good due to on-going maintenance and rehabilitation efforts. Most homes are owner-occupied and virtually all of the neighborhood is well maintained. The only neighborhood association is the Ferger Place Garden Club, one of the oldest garden clubs in the City being organized in 1922. A sign of the neighborhood's unity and vitality can be seen in its unified (and successful) opposition to the City of Chattanooga's proposal in the mid-1970's to remove their original lamp posts which had been electrified in order to install modern street lights.

Ferger Place was developed by the Ferger Brothers Real Estate firm in the early 1910's. The first home constructed in the area was for Herman Ferger himself. Over the next twenty years, a majority of the homes now in Ferger Place were constructed. The occupants of these homes were many of Chattanooga's substantial citizens such as teachers, businessmen and doctors.

The architectural styles found in Ferger Place represent those which were popular in the early twentieth century, and thus create a sense of time in Ferger Place just as the street system creates a sense of place. These styles include the bungalow, Colonial Revival, Tudor Revival, Dutch Colonial, Spanish Revival, and the Italian Villa.

The collection of these residences representing various architectural styles, and additionally, a large collection of vernacular architecture, creates one of the most visually appealing areas in Chattanooga. Although other collections of these styles remain in Chattanooga, few areas are as cohesive or present such a unified appearance as Ferger Place. This unified and cohesive appearance is achieved more through uniform setbacks, tree-shaded streets, and the symmetrical arrangement of the residences than by uniform massing and scale. It is this overall appearance and feeling of time created by this collection of housing of numerous bungalows and examples of vernacular housing that is the most significant architectural element of this district. Naturally, this is supplemented by the architectural merit of several individual residences that add greatly to the beauty of the whole.