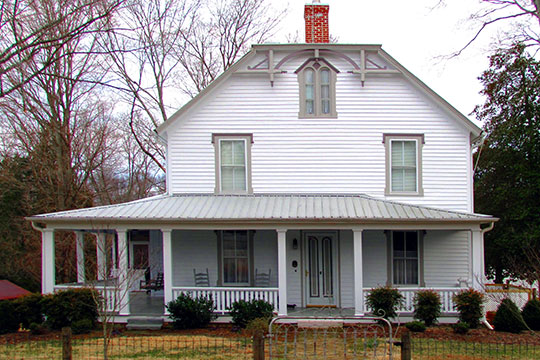 Louisville was the only community to rival Maryville in size and prestige in the early years of its settlement along the Tennessee River. This port town evolved in the early 1800s. Several commercial businesses and an Inn opened to take advantage of the river trade. A post office was established at Louisville in 1828 and in 1833 the town contained four houses, one store, several cotton and grist mills and three saw mills. By the late 1830s the business of "Samuel Henry and Sons" became prominent shipping goods from Louisville to New Orleans and constructing a large warehouse adjacent to the river. Other commercial activity also increased as numerous steamboats made regular stops at the town and at least six wholesale firms operated here by the early 1840s. The firms of Arthur Kennedy and Henry C. Saffle were two of the largest in operation and both owned large warehouses next to the river. Salt beef and pork from area farmers were purchased by these firms and shipped down the river on flatboats to New Orleans; clothing and other goods were then shipped back to Louisville via steamboat. This commercial activity resulted in Louisville's prominence second only to Maryville by the mid-19th century.