Photo: Home in the Converse Heights Historic District, Spartanburg, SC. The Historic District was listed on the National Register of Historic Places in 2007. Photographed by user:Bill Fitzpatrick (own work), 2013, [cc-by-3.0 (creativecommons.org/licenses/by/3.0)], via Wikimedia Commons, accessed April, 2014. 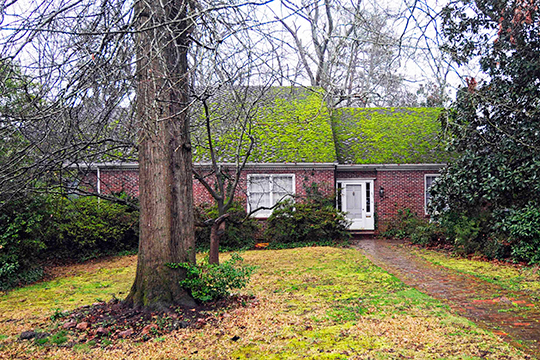 The Converse Heights Historic District was listed on the National Register of Historic Places in 2007. Portions of the content on this web page were adapted from a copy of the original nomination document. [‡]

This district, which began official development as a separate neighborhood in 1907 and continued to grow through the 1950s, includes single and multi-family residential buildings in the Queen Anne, American Foursquare, Craftsman, Spanish Mission, Tudor Revival, Colonial Revival, Neo-Classical and Minimal Traditional styles.

Today, properties within the Converse Heights neighborhood remain primarily single-family residences. There are several duplexes scattered throughout the district. There have been some homes demolished within the district and many homes have had alterations over time, but the overall character of the Converse Heights neighborhood has remained through the preservation of historic landscapes, streetscapes and architectural styles. Changes to area homes has and will continue to occur, but is being done in a sensitive manner that will continue to preserve the overall feel and style of this continually evolving neighborhood.

The Converse Heights Historic District is significant as an intact collection of residential architecture documenting architectural styles from ca. 1900 through the 1940s. The district documents the prevalent housing types for middle and upper class citizens in the early to mid-twentieth century and demonstrates the pattern of suburban development as automobile use became prevalent and as social views of housing shifted.

The neighborhood now known as Converse Heights received its name from Converse College, the women's college located immediately north of the neighborhood across East Main Street. Originally farmland, the area was owned by Civil War Major Govan Mills (1805-1862). Born in North Carolina, Mills settled in Spartanburg County and owned a large plantation on the outskirts of the city. The United States Census from 1850 lists Mills (age 45) as a farmer living with his wife Nancy (age 43) and three children: Mary (age 14), Robert (age 12) and John (age 10). In 1865, the site played host to enlisted men and horses of Brigadier General William J. Palmer's forces who stopped for the night in Spartanburg while searching for Jefferson Davis during his flight from Richmond.

In the early 1900s, the city of Spartanburg was undergoing a significant building boom. As rail lines reached the upstate and textile mills opened in Union, Gaffney and Spartanburg, the city's size quickly began to grow. US Census figures show that in the decades between 1890 and 1916, Spartanburg's population more that tripled—growing from 3,253 to 11,395. The construction of numerous textile manufacturing facilities allowed for capital improvements around the city that had previously gone unfulfilled. A ten-year street improvement project was underway in the early part of the twentieth century that resulted in the paving of streets and sidewalks in the downtown area and the installation of electric lights in the business district along Magnolia Street to Morgan Square and out East Main Street to Converse College. It was along that same route that a streetcar line was constructed, connecting the College and the newly developing Converse Heights neighborhood to the burgeoning downtown.

Because many downtown residences were being demolished to make room for the growing commercial center, the demand for in-town housing grew. As development pushed out Main and Church Streets, small neighborhood developments began to emerge. In 1906, Govan Mills' son Otis divided the family farm into plots to open up the land for residential development. Two of the main streets in Converse Heights: Otis Boulevard and Mills Avenue pay homage to the family on whose land the development was taking place. By 1910, local newspapers were printing advertisements for J.T. Willard who was announcing "Lots for Sale" on East Main Street and on Mills Avenue in Converse Heights. Despite the fact that the neighborhood was officially opened for development in 1906, the 1910 Spartanburg City Directory still made no mention of Otis Boulevard or Palmetto Street and Sanborn Fire Insurance Maps from 1912 show a street grid with no homes. In fact, by 1923, there were only 10 homes in the neighborhood. Today, however, the neighborhood of Converse Heights includes 35 streets with more than 1300 homes located between Pine Street and Lawson's Fork Creek, East Main Street and Crystal Drive.

The Converse Heights neighborhood showcases each of the key architectural styles used throughout the twentieth century. The district, which was developed continuously from 1906 through the 1950s, includes single and multi-family residential buildings in the Queen Anne, American Foursquare, Craftsman, Spanish Mission, Tudor, Colonial Revival, Neo-Classical and Minimal Traditional styles.

The location of the neighborhood—close to the fast-growing business district—and the construction of a streetcar line that ran to the neighborhood entrance made the district and ideal location for local businessmen and professionals working in downtown Spartanburg. Within Converse Heights, restrictions were placed on new home builders mandating that homeowners spend at least $1500 on the construction of their homes which also attracted a certain level of Spartanburg's business elite. The overall development of the Converse Heights neighborhood truly reflects the economic and social changes that Spartanburg was experiencing in the early to mid-twentieth century. The neighborhood is what many would call a "streetcar suburb", a precursor to the modern-day suburban neighborhood.

As the neighborhood began to develop, larger two-story homes were concentrated along Mills Avenue while smaller, one-story dwellings were built on the secondary streets. A majority of the early homes constructed in Converse Heights, with a few notable exceptions, are modest in size and design constructed in the Craftsman or Bungalow style. These smaller homes were becoming increasingly popular in the early to mid-twentieth century in the pages of Ladies Home Journal and Good Housekeeping as well as the distribution of pattern books and kit homes available for purchase. Maple and Rutledge Streets, as well as Glendalyn Avenue, were lined with these small family friendly homes.

Each of the streets within the neighborhood has a unique story to tell. Otis and Mills Streets were both named to honor members of the Mills family on whose property the neighborhood was constructed. Both were divided by planted medians designating them as the two main streets within the development. Connecticut Avenue, one of the most heavily traveled streets in the neighborhood, was originally the driveway leading to the Evans [later Evans-Russell] House. Constructed in 1901 by former Governor John Gary Evans for $9,900, the house now sits on Otis Boulevard and is part of the Converse Heights neighborhood. Maple Street garners its name from the many maple trees that were originally planted throughout the neighborhood.

The architectural styles present within the neighborhood reflect the mood of the era in which they were built as well as the social stature of those who lived there. At the time of Converse Heights' development, the Queen Anne and Colonial Revival styles had cemented themselves as the favorites for early neighborhood developments. While the popularity of the Queen Anne was tapering off by 1910, Colonial Revival in its various forms lasted well into the 1950s. Homes along Mills Avenue and Connecticut Avenue reflect the Colonial Revival style in its differing forms.

Also popular during the growth and development of Converse Heights was the Craftsman Style and its Bungalow single family home. Inspired by the work of Charles Sumner Greene [1868-1957] and his brother Henry Mather Greene [1870-1954] of the Pasadena, California, based firm of Greene & Greene, the Craftsman house blended characteristics of the Arts and Crafts movement with the small single family home. [see: Pasadena California Arts and Crafts Architecture, 1895-1918] A majority of the homes in Converse Heights along Glendalyn Avenue and Norwood and Rutledge Streets reflect this popular architectural style.

Lastly, homes constructed during the final developmental phases of the neighborhood reflect the post-war period of brick veneer home construction. Because most construction ceased during the years 1942-1945, the return to residential construction reflected the new ingenuity of post-war America and the new ideals that went along with the automobile era. Known by many as Minimal Traditional, this "style" of post war housing was loosely based on the Tudor Revival style that was popular in the late 1920s and 1930s. Like its predecessor, Minimal Traditional homes have dominant front gables and massive chimneys while lowering the steep pitch of the Tudor revival gables and simplifying the main facade by omitting the half-timber detailing. By the early 1950s, these homes were being replaced by what we now know as suburban ranch housing. The end of the development of Converse Heights coincides with the "white flight" from city neighborhoods to sprawling suburban neighborhood developments that were much more automobile friendly.