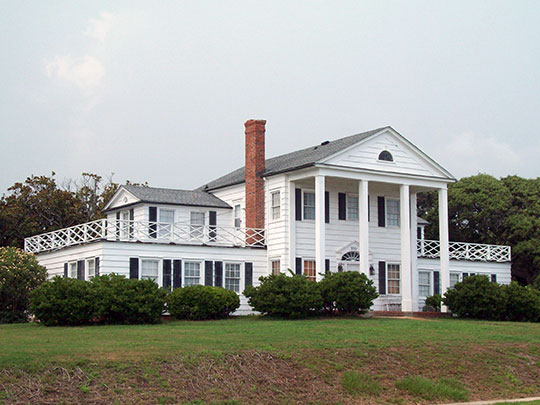 The Myrtle Heights-Oak Park Historic District was listed on the National Register of Historic Places in 1998. Portions of the content on this web page were adapted from a copy of the original nomination document. [‡] .

The majority of the residences in the district are two-story frame buildings, many of them with one- or two-story attached garages, two-story detached garage apartments, or one-story attached servants' quarters. The most prevalent stylistic influence is Colonial Revival, characterized by symmetrical facades, accented central entrances, and six-over-six double-hung sash windows. Elements of the Classical Revival, Tudor Revival, and Bungalow/Craftsman styles are also represented. Most of the properties contributing to the district, however, represent vernacular forms with modest stylistic influences and common ancillary elements. A variety of forms are present, most notably 1) rectangular, with front and side gable roof; 2) square, or nearly-square, with pyramidal roof; 3) rectangular, with hip roof, front and side orientation; and 4) gabled-ell. Porches, chimneys, and wood awnings, constructed and painted in a solid or striped scheme to imitate or simulate canvas awnings, are the most common ancillary elements. Wood siding (weatherboard and shingle) and asbestos shingle siding are the most common historic exterior material evident. Wood shiplap siding was originally common, but in some instances may now be obscured by aluminum or vinyl siding. Alterations to residences in the district include the addition of non-historic siding; limited replacement of windows and porches; and non-historic landscaping.

The overall layout of the district—including lot sizes, street plans, and public spaces—has not changed since the original plans of the mid-1930s. In general, the ocean-front lots are more densely developed than those across North Ocean Boulevard from the beach. Second row lots typically divide the block width in half, with an average lot width of 150' on the second row as compared to a range of 75' to 155' lot width on the ocean. Lot sizes are also more standardized in the Oak Park section northeast of 40th Avenue North than in the Myrtle Heights section southwest of 40th Avenue North. The original plans for the Myrtle Heights-Oak Park developments included extensions of the avenues beyond North Ocean Boulevard to the beach. These extensions now provide public access to the beach. The predominant building orientation of properties along the southeast side of North Ocean Boulevard is, of course, toward the beach and the ocean, so that the rear elevations of oceanfront properties face toward the Boulevard.

The original plans also provided for a minimum setback of 75' for ocean-front properties, creating one of the defining characteristics of these lots—and the Myrtle Heights-Oak Park Historic District. Landscaping varies; the most common plant material is grass. Few oceanfront lawns feature the dense-growing native species such as wax myrtles and red cedars, but the rear yards facing North Ocean Boulevard frequently retain the native species and other plants as well, such as wax myrtles—from which Myrtle Beach got its name—red cedars, palmettos, oleander, windswept oaks, and crepe myrtles. Fifteen properties in the district retain their historic fences or walls, with most of them constructed of coquina rock or brick. The character of the Myrtle Heights-Oak Park Historic District has been altered somewhat since 1945. North Ocean Boulevard has been paved, widened, and had sidewalks added; the beach profile has gradually eroded, and oceanfront landscaping has been altered both by Hurricanes Hazel (1954) and Hugo (1989) and by responses to environmental factors; and the areas beyond 32nd Avenue North and 46th Avenue North have experienced significant development on North Ocean Boulevard, as have the perpendicular numbered avenues between the lower and upper boundaries of the district. Because of this development, these areas to the north, south, and west have been excluded from the historic district even though Myrtle Heights and Oak Park may have once included parts of them.

The history of the Myrtle Heights and Oak Park sections of Myrtle Beach relates to the period of development in Myrtle Beach following the financial collapse of Woodside Brothers, the company that developed the Ocean Forest Hotel and Country Club in the late 1920s. The company had originally purchased 65,000 acres from Myrtle Beach Farms in 1926, and after Woodside Brothers collapsed Myrtle Beach Farms repossessed many of those holdings and began to subdivide and develop sections of them during the 1930s. The Myrtle Heights section, from 31st Avenue North to 40th Avenue North, was opened in 1933, and the founders of Myrtle Beach Farms were among the first property owners to build summer homes and vacation cottages there. The Oak Park section, from 40th Avenue North to 46th Avenue North, was opened in 1935. The vast majority of the development in this area took place along North Ocean Boulevard, with only sporadic development along the perpendicular numbered avenues between 1945 and 1954.

The Myrtle Heights-Oak Park Historic District is not only significant in the twentieth-century development of Myrtle Beach but also as a collection of architecturally distinctive properties and representative examples of building types. Many of the residences in the district, built for some of the most prominent families in Myrtle Beach, Conway, and the surrounding areas, are larger and more sophisticated than most summer homes and vacation cottages along the Grand Strand. Three of the most significant properties in the district, all constructed between 1934 and 1939, are associated with the founders of the Myrtle Beach Farms Company. 3202 North Ocean Boulevard was built for Simeon B. Chapin, but has been altered significantly and no longer contributes; 3600 North Ocean Boulevard was built for the Burroughs family; and 3703 North Ocean Boulevard was built for James E. Bryan Sr. Other significant properties which contribute to the district include 3302 and 3304 North Ocean Boulevard (ca. 1935); 3400 North Ocean Boulevard, built in 1936 for John Ray Efird of the Columbia, South Carolina based Efird's Department Store chain, according to plans by J. Carroll Johnson, prominent Columbia architect; 3601 North Ocean Boulevard (ca. 1935); and 3803 North Ocean Boulevard (ca. 1935). While there is little, if any, evidence at this time to connect other practicing architects with residences within the boundaries of the historic district, there is no doubt that a number of the houses were indeed architect-designed. One South Carolina firm that is known to have designed oceanside cottages in Myrtle Beach in the 1920s and 1930s was that of Wilkins & Hopkins, Architects of Florence. Further research on individual residences should reveal that a number of architectural firms in and outside South Carolina were active in the area encompassed by this historic district's boundaries. This district, furthermore, is the largest intact concentration of historic resources in Myrtle Beach, most other areas having been heavily developed and redeveloped since 1945.