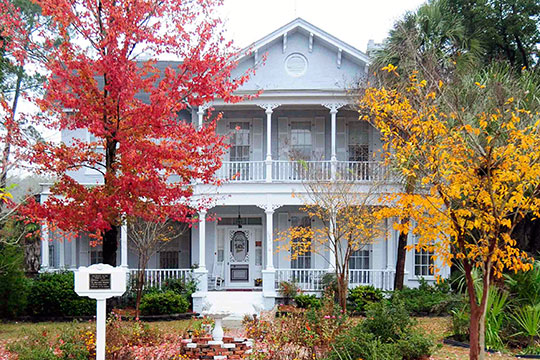 The Bamberg Historic District was listed on the National Register of Historic Places in 1983. Portions of the content of this web page were adapted from a copy of the original nomination document. [‡]

The Bamberg Historic District is a residential neighborhood of some seventy-five properties lying along both sides of the Southern Railroad tracks in the eastern end of Bamberg, in Bamberg County, South Carolina. The district includes parts of Second Street, East Railroad Avenue, Midway Street, Elm Street, Cannon Street, North Carlisle Street, and Church Street. Fifty-six of the properties define and support the historic character of the district, which represents the major residential section of Bamberg from the period 1880-1930. The buildings of the District range from one to two-and-one-half stories and are primarily of frame construction. Most of the buildings are vernacular residences with prominent porches and profuse carpenters ornamentation; a few of the largest and most important buildings express the more fashionable architectural styles of the era, including Georgian Revival, Second Empire, Neoclassical, and Gothic Revival. The buildings are set on landscaped lots with tall trees, the largest lots facing on either side of East Railroad Avenue.

Since the development of this district in the period 1880-1930, few modern buildings have been constructed in the area and no major intrusive elements have been added. The district retains its historic integrity as a middle to upper-income residential district. Most of the houses are well-maintained and occupied, and there is still railroad traffic on the tracks.

The Bamberg Historic District is a significant collection of buildings from the period 1875-1930 which presents an accurate depiction of the foremost residential neighborhood of Bamberg of this period. The buildings are of consistent scale, density, massing, and setback, with the largest and most prominent buildings along the central section of East Railroad Avenue and the smaller residences along Second Street, Midway Street, and the extremities of the district. The historic integrity of the district and the excellent state of most of the buildings help express the true history of the neighborhood. Some of the individual buildings in the district, especially the landmark churches and the houses of the most important citizens, express various fashionable architectural styles of the era; for example, the Counts-Jones House is a noteworthy Second Empire building, and the J.D. Copeland House has a fine Neoclassical portico.

Two of the churches, the Bamberg Presbyterian Church and the Trinity United Methodist Church feature the asymmetrical massing, picturesque rooflines, and pointed arches of the Gothic Revival Style. The First Baptist Church is a fine Georgian Revival building.