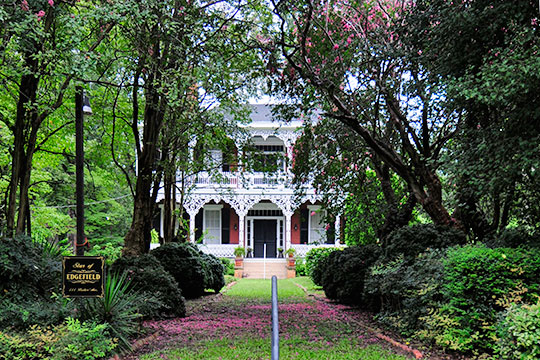 The Georgia Avenue-Butler Avenue Historic District was listed on the National Register of Historic Places in 1984. Portions of the content of this web page were adapted from a copy of the original nomination document. [‡]

Located in a predominantly residential area of North Augusta, the Georgia Avenue-Butler Avenue Historic District is on a hill overlooking the city of Augusta, Georgia. The district contains four buildings of particular historical or architectural importance plus twelve supporting properties, which include houses, an old family burying ground, open space, and an undeveloped lot. The buildings that contribute to the character of the district were erected from ca. 1859 to ca. 1930; the majority were constructed from ca. 1903 to ca. 1907. The open space and undeveloped land included in the district were once associated with the Star of Edgefield, a key property in the district. Georgia Avenue-Butler Avenue Historic District possesses integrity of location, design, setting, materials, workmanship, feeling, and association.

Georgia Avenue-Butler Avenue Historic District is located along portion of Georgia Avenue, Observatory Avenue, and Butler Avenue in North Augusta. The sixteen properties in the district illustrate the growth of the area from the time it was part of an antebellum plantation through its development as a winter resort and year-round residential community for Augusta area professionals around the turn of the twentieth century. Most of the buildings were constructed between 1900-1930 and represent a range of vernacular residential designs. One of the key properties is a plantation house built around 1859; two of the other key properties are buildings associated with a hotel which stood from 1903 to 1916. The district also contains an old family cemetery, open space, and an undeveloped lot. Of the sixteen properties in the Georgia Avenue-Butler Avenue Historic District, four are of particular historical or architectural importance and twelve contribute to its character.

Robert J. Butler owned a large portion of the land on which North Augusta was later built. His home, the Star of Edgefield, ca. 1859, was situated on an extensive plantation, which was valued at more than $50,000 in 1860. Butler's daughter, Mattie Butler Mealing, inherited the Star of Edgefield and a large portion of land from her father upon his death in 1888. She married North Augusta's first doctor, William E. Mealing, who maintained an office in the Butler home. Mrs. Mealing sold approximately 5,600 acres of land to the North Augusta Land Company in 1890.

This development firm, which was organized by James Urquhart Jackson, purchased other land in the area, devised a town plan, and constructed a steel bridge and trolly line across the Savannah River to provide ready access to and from Augusta, Georgia. In 1902 the North Augusta Land Company built an interurban trolley line that extended from Augusta, Georgia, through North Augusta and the mill villages of Horse Creek Valley, to Aiken, South Carolina. The town of North Augusta was issued a charter on April 11, 1906, which provided for public improvements; in the same year a city government was formed.

The growth of North Augusta prompted Jackson to organize the North Augusta Hotel Company and build the Hampton Terrace Hotel at a cost of $536,000. The hotel opened in 1903 and saw tremendous success as it capitalized on the resort business of Augusta, Georgia. The Hampton Terrace Hotel helped establish North Augusta as a resort town in its own right by attracting prominent people such as John D. Rockefeller, Harvey Firestone, Marshall Field, and President William H. Taft.

The Hampton Terrace Hotel burned on December 31, 1916, and was deemed too costly to rebuild. Two buildings which were associated with the hotel, however, are included in the Georgia Avenue-Butler Avenue Historic District. Palmetto Lodge, ca. 1903, was built by the hotel owners as a hunting lodge, but was sold to John Herbert of New York as a private residence shortly after its construction. It has seen a succession of occupants including President Taft, J. D. Rockefeller, Harvey Firestone, and the writer Edison Marshall, whose most famous novel, The Vikings, was written there.

The other extant building associated with the Hampton Terrace Hotel, the Pine Heights Sanitarium, ca. 1905, was operated as a hospital primarily for hotel guests until 1914. In the mid 1920s it was used as spring training headquarters for the Detroit Tigers baseball team. Soon after the founding of North Augusta and the establishment of the Hampton Terrace Hotel, area businessmen began building homes on lots purchased from the North Augusta Land Company. For example, the houses at 1141 Georgia Avenue, 1135 Georgia Avenue, and 1300 Georgia Avenue were constructed ca. 1905, on land which had once been a part of the Star of Edgefield plantation.

North Augusta continued to have winter visitors after the Hampton Terrace Hotel burned in 1916; however, the town never regained national prominence as a winter resort. For example, Sunshine Cottage, ca. 1918, at 125 Butler Avenue, was the winter residence of Mr. and Mrs. Howard Carson of Boston, who had been regular guests at the hotel. In 1928 Mr. Carson bequeathed Sunshine Cottage as a source of income to the Nancy Carson Library, which had been so named to honor the Carsons' generosity when North Augusta's first library was organized. North Augusta did maintain some businesses and industries, but continued largely as a residential area for area businessmen.