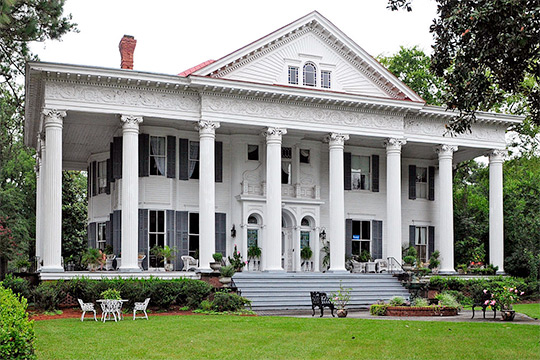 As a boy, Augusta native James Urquhart Jackson envisioned a town overlooking Augusta in the rolling bluffs across the Savannah. Jackson pursued that dream and in 1889 formed the North Augusta Land Company. In 1890, the company purchased 5,600 acres of land for $100,000 from the plantation acreage of Mrs. Mattie Butler Mealing. Jackson then hired the best designers from New York to design the new town. The original plat of North Augusta, the Boeckh Plat, was drawn in 1891. The plat includes a traditional downtown, formal public park areas, undeveloped open space areas, and a traditional lot, block and street layout.

The same year, Jackson built a steel bridge across the Savannah River. The bridge connected Augusta's 13th Street with North Augusta's Georgia Avenue and provided direct access from Augusta to North Augusta. The bridge was later dedicated the James U. Jackson Memorial Bridge. In 1897, to further facilitate transportation across the river, the North Augusta Land Company constructed a trolley line across the bridge. The trolley initially extended to the former North Augusta Natatorium, an elaborate and popular swimming pool located between Crystal Lake Drive and Bluff Avenue. Progress followed the trolley as it extended up West Avenue to Jackson Avenue. The trolley was eventually extended to Aiken and the Augusta-Aiken Railway Company was formed. The trolley ceased operation in 1929.

Following the success of the bridge and the trolley line, Jackson formed the North Augusta Hotel Company. In 1902 the company broke ground on the Hampton Terrace Hotel, located high on the hilltop overlooking Augusta. Completed in 1903 at a cost of $536,000, the Hampton Terrace boasted five floors and 300 guest rooms fitted with every convenience available at the time. A golf course, tennis courts and a riding stable were located on the grounds. The Hampton Terrace soon established North Augusta as a popular winter resort destination and attracted such prominent northerners as Harvey Firestone, John D. Rockefeller and then Vice-President Howard Taft.

As the town grew, so did the need for law and order. In 1903 with a population estimated at several hundred, a petition requesting a charter was sent to the governor of South Carolina. On April 11, 1906, the town of North Augusta was incorporated. The first meeting of the Town Council was held April 16, 1906. The meeting was presided over by the town's first Intendant (Mayor), L.L. Arrington, and four Wardens (Councilmen). By 1913 the population had grown to 1500. On December 31, 1916, the Hampton Terrace Hotel burned to the ground. It was a total and devastating loss and served to end North Augusta's prominence as a winter tourist destination.