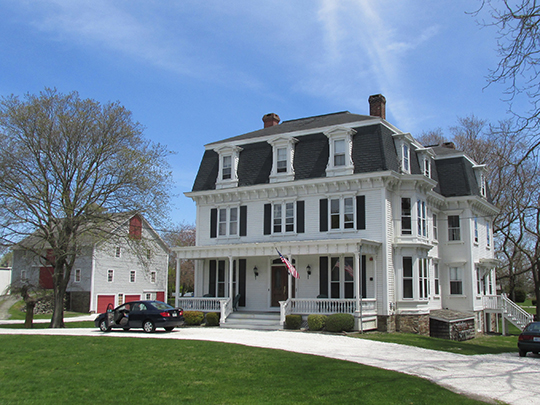 Portsmouth was founded in 1638 by 19 colonists from Massachusetts Bay Colony under the leadership of John Clarke and William Coddington. It was probably named for Portsmouth in the county of Hampshire, England. The first settlement was made that year at the north end of the island, near what is now called Founder's Brook. Here a body politic was formed on democratic principles in which no one was to be "accounted delinquent for doctrine." Meetings of the settlement were held whenever occasion demanded, which in the early days was frequent. The colony flourished and soon received a larger group of settlers from Massachusetts, who came with Anne Hutchinson.

In May of 1639, William Coddington, Nicholas Easton, John Clarke and 8 others moved to Newport and carried with them the Pocasset (Portsmouth) records to that date, which explains why the history of Newport begins with the settlement of Pocasset. After this group left, a new political organization was formed by the 31 remaining colonists.

The earliest activities of Portsmouth were farming and shipbuilding, but the fisheries of the adjoining waters have for some time constituted an important source of revenue to many inhabitants. The coal field in the western part of the township has produced a combustible coal and at one time a large business was carried on. Coal mining was introduced here about 1800, but the product required special apparatus and powerful blast to burn it, and it was little used except in smelting furnaces; the mines were abandoned in 1911. The town in recent years has witness and considerable increase in the number of summer homes as well as permanent residents of people who work in nearby cities.