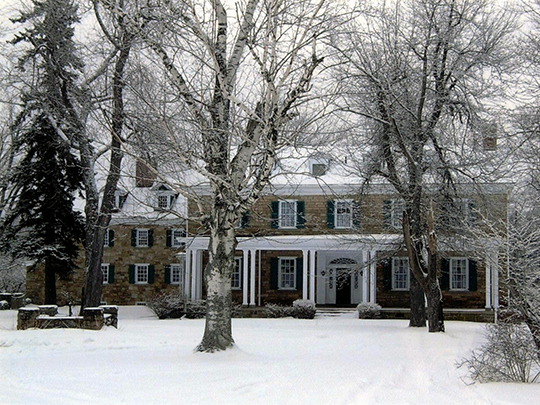 Formed March 15, 1847, named for General John Sullivan; is noted for picturesque scenery, mountains, valleys, lakes, streams and waterfalls, forests, and distant views. Either the scenic Williamsport and North Branch Railroad or the state highway, that parallel each other and enter the county near Muncy Valley, lead to beautiful Eaglesmere, 1900 feet above sea; on Lewis Lake, one and a half miles long, one-half mile wide; depth never definitely determined, fed by subterranean waters. About the shore, tree bound, with luxuriant growth of rhododendron and laurel, and rock faced to deep water, there are lovely nooks, and a bathing beach of white sand at the northern end. Passing from Eaglesmere through "Celestia," where the lands were deeded in 1864, by Peter E. Armstrong and wife, to "Almighty God"-the deed may be seen at the county courthouse one comes to LaPorte, population 175; highest and smallest county seat in Pennsylvania, 2000 feet above sea level, with its natural beauties, including "Lake Mokoma," is also an attractive summer resort. It was laid out in 1850, by Michael Meylert, who owned the land and built the first courthouse; present building, facing the park, is Romanesque; brick; beautiful Lombardy poplar trees are in the yard. Within the last twelve years advanced civilization has penetrated into Sullivan County in good state highways, rural mail routes, telephones, and several borough and township high schools. The streets of LaPorte are wide and well kept, and the park is in care of the Ladies' Village Improvement Society.

At the top of the mountain, on the road toward Sonestown, is "Fiester's View," where the deep valley of Muncy Creek, walled on the east by the towering North Mountain, 3000 feet above tide, near Nordmont, is beautiful beyond description. At the junction of the Big and Little Loyalsock Creeks is the pretty little town of Forksville. Dr. Priestly purchased a large tract of land about here, laid out roads, and made many improvements. Four miles distant, on the state highway toward Hillsgrove, on Kings Creek, is Lincoln Falls, a waterfall about 30 feet in height at the head of a gorge with perpendicular walls of rock, varying from 50 to 80 feet in height. A few deer, quite a number of bear, foxes, rabbits, and squirrels are in this county; a state game preserve is in the southeast near Jamison City. There are some good trout streams, and the lakes are well stocked with fish. The most valuable industry is coal from the Bernice coal fields in the east. The production of hemlock tanned sole leather is important. Farm products and dairying are general.