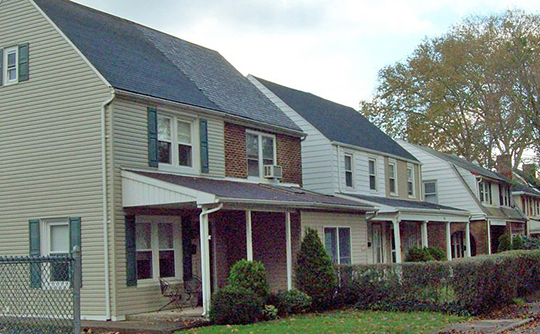 The Elmwood Park Historic District [‡] was listed on the National Register of Historic Places in 1988.

Elmwood Park is an early-20th century suburban, working class, residential development constructed chiefly of clapboard, brick and stucco on a plain six blocks northeast of Bethlehem's midtown section. It was conceived as a cohesive unit tied together by material, scale, and style. Houses in the Elmwood Park Historic District are one-and-one-half- or two-story vernacular dwellings accented with Colonial Revival features. Although some of them have been individualized with new roofs and siding, the Elmwood Park Historic District retains its cohesiveness with moderate integrity.

Although close to downtown, the Elmwood Park Historic District has remained out of the mainstream of traffic. It is separated from two main arterial routes (Pembroke Road and Broad Street) by later commercial development, and its oval street pattern discourages through traffic. The houses turn their backs on outside traffic. The houses turn their backs on outside traffic by facing to the center of the development. Elmwood Park originally was planned to consist of 235 lots arranged around a large oval street pattern and a central playground which serves as the focus of the neighborhood. The development suggests a planner's romanticized conception of a colonial village, a collection of small, unified dwellings showing Colonial Revival influence clustered around a central playground, the modern equivalent of a village "common." The houses usually stand right on or within 10 feet of the sidewalk line and are erected on lots as narrow as 15 feet.

The 68 contributing houses were built from 1917 through 1920, most commonly of brick, clapboard or stucco. They include two-story apartment buildings, some with seven residences and some with six; two-story "butterfly units" (triple apartments wrapping around the corners of street intersections); one-and one-half- and two-story double residences, and single dwellings. A one-story playground building and a two-story bar/restaurant are the only non-residential contributing buildings. Gable roof ridges typically are parallel to the street, and front porches, either attached or part of the mass of the house, extend across most Elmwood Park house fronts. Most houses have two bays. Side yards are minimal, giving the effect of a continuous street facade.

The buildings are constructed in six forms: two kinds of single residences, two kinds of doubles, one variety of triple units and one form of apartment buildings.

The double units, the most common form of residence in the Elmwood Park Historic District, occur in two basic forms. One form is a two-story brick house with gable roof ridge parallel to the street. Chimneys flank the roof at the gables and garrets have quarter fan louvers. Front porches extend the width of most of these houses. Some of the houses have pent eaves and center porches and a few have both. Porch roofs slope toward the street and are supported by columns. The walls are brick, laid in running bond, but a few exceptions are made in clapboard or stucco. A variant form is a two-story unit with a two-story side gabled wing.

The second double unit version is built to appear to be one story high, with large roof and dormer windows concealing a full second floor. The roofs are either gable or gambrel, and have shed-roof or gabled dormers. A front porch, frequently enclosed, is incorporated into the mass of each unit. The gambrel roof models often have brick arch porch roof supports. Instead of the usual triple wooden posts, porches on these houses have single, 18-inch-round columns.

The triple units are in "butterfly" pattern. The central block faces a street intersection diagonally with two side sections set parallel to the intersecting streets. The center portion has a central gable with semi-circular fanlight and Classical/Colonial Revival eaves trim with returns. A central door in the gable face has columned pilasters and matching overdoor. Two windows pierce both the first and second floors and do not align. The side extensions join the middle block along angled walls. Side unit entry doors abut the central portion of the building and originally included inset porches, most of which now are enclosed. The main facades of the side units include fluted pilasters and architrave trim with single and double windows symmetrically arranged.

The apartment buildings are symmetrical. Both end units are gabled, set perpendicular to the street, while interior units are topped with gable roofs parallel to the street. Interior blocks have one shed roof dormer each and triple-columned porches. Each unit has two bays of six-over-six windows and an offset front door. The walls are stuccoed or brick laid in running bond. End units feature front porch insets under the second floors. The porches are trimmed with square columns. Six-over-six windows pierce the walls over the porches and a single rectangular window is placed in each gable.

The 11 non-contributing buildings are later. They consist of seven single and four double houses built between 1950 and 1986. The single-family houses usually are of one- or one-and-one-half-story Ranch or Cape Cod style. Constructed on several of the original-plan lots, these low-slung houses are more widely spaced than original Elmwood Park buildings, contrasting both in height and distribution density with the first units. Most of the non-contributing double residences are two-story buildings erected on the original, narrow lots. The newer buildings typically have two bays and front porches and are similar in mass to the original Elmwood Park houses. Modern siding, window materials, size, and lower roof slopes differentiate the non-contributing from the contributing buildings.

Contributing buildings maintain moderate integrity. The planned unity of Elmwood Park is declining, however, as houses are individualized. Many of the multiple houses have been sided, with different colors of aluminum on adjoining units; some have been stuccoed, while others retain the original surfaces. Porches have been enclosed or their columns replaced with iron or aluminum. Some slate roofs remain, but an increasing number of them has been replaced with roofing materials in a variety of colors. Many units have aluminum-clad gables, facia, soffits and dormers. Nonetheless, the houses retain their planned mass, and new construction is not sufficiently out of scale to destroy the plan. Roughly 60 per cent of original dormers, porches, windows and surfaces remain. The Colonial Revival style and detailing, bay arrangement, and window and chimney design still unite the Elmwood Park Historic District.

Elmwood Park was designed as a cohesive, distinct neighborhood, unified by style, materials and color. Enough of that unity remains, despite later construction and updating of original buildings, to make Elmwood Park a distinctive Bethlehem neighborhood.

Elmwood Park Historic District is an architecturally significant residential district in Bethlehem, one that represented a new approach to housing development in the city. Prior to the construction of Elmwood Park, Bethlehem housing was erected piecemeal in a variety of materials, scales, and styles, often within the same block. Elmwood Park is the first large, private suburban residential project in Bethlehem created consistent in construction, material, scale, and style. As such, it marks the beginning of large-scale, unified housing developments in Bethlehem and its suburbs. It is the first expression of a trend toward such projects that began in Eastern Pennsylvania in the late 19th century.

Elmwood Park was built in 1917 as part of the residential expansion needed to house workers of the growing Bethlehem Steel Company. The company, which produced arms during World War I, increased its work force from 11,000 in 1914 to 28,000 in 1917. In response to the resulting housing demand, Bethlehem area developers usually bought several lots or a block along the established street grid. Much of South Bethlehem and portions of North and West Bethlehem are covered with duplexes and row houses constructed in this fashion. Various developers built houses of different types and styles and sizes on adjoining blocks, creating inconsistent block patterns.

Elmwood Park is different. The Pittsburgh developers Wood and Hawthorne bought a 13-acre site for their project, larger than the typical development site. They organized Elmwood Park on an oval street pattern, surrounding a central playground, creating the modern equivalent of a colonial village with its public green.

The design and construction of Elmwood Park Historic District houses reinforces the distinct character of the neighborhood. Although single, double, triple and row units were constructed in Elmwood Park, mass and scale generally are uniform, as are first-floor levels, floor-to-ceiling heights, roof slopes and roof materials. A variety of materials is used in Elmwood Park to avoid monotony, but are repeated throughout the neighborhood to preserve continuity. Porches take different forms but those forms also are repeated. Common details appear throughout the district. Multi-paned windows are common, symmetrically arranged. Attic fanlights occur on single, double, triple, and row units. Common eaves material and cornice patterns are used. Large, round columns are fitted to both single and double houses.

Houses were built upon 158 of the 235 lots on the original plan. Dodson Realty of Bethlehem marketed Elmwood Park, and all the original houses there were sold by 1920. Some empty lots were sold through 1938, and after World War II single Ranch-style or bi-level houses were built on two or more of those lots.

Elmwood Park Historic District represents a significant shift in the evolution of Bethlehem housing. From the mid-19th to early 20th centuries, after the dissolution of the original Moravian community in 1844, housing in the city expanded from the Moravian core in piecemeal fashion. Residences on different blocks, or frequently within blocks, were erected at various times in different materials, scales and styles. For instance, in the Central Bethlehem Historic District Boundary Increase, large, high-style residences were built along East Market Street. Smaller, vernacular, detached houses or row houses were interspersed among them. Fountain Hill Historic District, which was developed for middle- and upper-level managers, contains houses built in a variety of materials and styles.

Elmwood Park is the first of a series of large-scale, unified housing developments built in the Bethlehem area. Pembroke Village was created northeast of Elmwood Park during 1918 as a similarly styled working-class development. Although Pembroke Village was planned by the U.S. government while Elmwood Park was a private project, it has various types of multi-unit buildings united by a common use of brick, one-and-one-half-story scale, and a vernacular appearance, much like Elmwood Park Historic District. Other suburban developments sprawled north of Bethlehem during the 1920s and, especially, after World War II. These suburban developments feature the same detached building designs set in long rows on the same-sized lots. They are characterized by unified design and layout, similar massing and ornamentation.

Elmwood Park Historic District also is a local example of this large-scale, tract housing trend which could be seen in several Pennsylvanian cities by the early 20th century. In eastern Pennsylvania such developments began most notably at the end of the 19th century in suburban Philadelphia. As railroad and trolley lines stretched from Philadelphia into surrounding counties, developers erected extensive neighborhoods of common construction, scale, and style, many for middle- and upper-class residents. Lansdowne, for instance, was created in Delaware County during the late 19th and early 20th centuries as a middle-class neighborhood of two-and-one-half-story, Queen Anne houses. It was added to the National Register in 1987. Other projects were designed for working-class inhabitants. In Bristol, Bucks County, the Jefferson Land Association Historic District, listed on the National Register in 1987, was established for World War I workers. Front columned porches and bay windows are repeated throughout the blocks of this neighborhood. In eastern Pennsylvania this trend of unified, large-scale construction reached its logical conclusion in the state's first Levittown, built immediately after World War II near Bristol. The stamp of cookie-cutter designed houses has since appeared throughout the suburbs of eastern Pennsylvania.