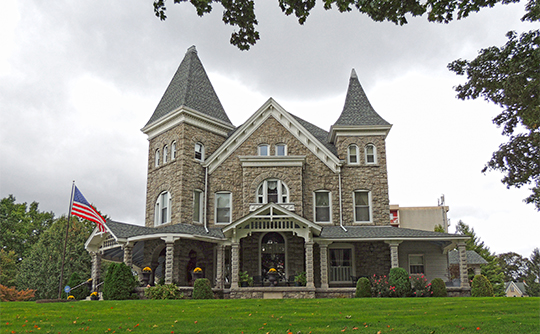 The Catasauqua Residential Historic Districtr was listed on the National Register of Historic Places in 1984. Portions of the content on this web page were adapted from a copy of the original nomination document. [1]

The Catasauqua Residential Historic District reflects the affluence and prosperity that the anthracite iron industry brought to Catasauqua. Once Surrounded by workers housing, much of the district was at one time owned by the town's best known iron baron, David Thomas, who, along with a few other prominent businessmen made his home there. In the late nineteenth-century Thomas' extensive holdings were sold for development and the district became the area where the town's new upper class, including D.G. Dery, a silk mill operator located. Though the industrial concerns that brought prominence to the area are gone, the district continues to reflect the wealth that was once part of Catasauqua.

Until the 1830's almost all iron furnaces in the United States were fueled by charcoal. However, spurred by a diminishing supply of lumber and a substantial reward offered by the Lehigh Coal and Mining Company, numerous efforts were made within Pennsylvania to develop a furnace that burned anthracite coal. The most successful attempt was made by the Lehigh Iron Company. After consulting with George Crane, an ironmaster who had developed an anthracite furnace in Wales,, the company brought David Thomas, an apprentice operator at Crane's furnaces in Wales, to America. Locating along the Lehigh River, the Lehigh Crane Iron Company, under Thomas' guidance, opened an anthracite furnace in July, 1840. The furnace was so successful that within a decade the Lehigh Crane Iron Company built four more furnaces along side the original.

The 1860's was a decade of explosive growth in Catasauqua. The impact of the Civil War on the production of iron had a very positive effect on Lehigh-Crane as well as the borough. By the end of the decade the company had six furnaces in operation. New iron companies were also opened in Catasauqua during the 1860's. In 1863 David Thomas, the guiding light of Lehigh-Crane twenty years earlier, started the Northern Iron Company to manufacture iron plate and rails. As a rolling mill, Thomas's new enterprise, renamed the Catasauqua Manufacturing Company in 1868, complemented the production of the Lehigh- Crane furnaces. Other metal manufacturers that opened during the decade included the Davies and Thomas Foundry in 1865 and McKee, Fuller and Company a year later. The Lehigh Fire Brick Company, two breweries and another regional railroad, the Lehigh and Susquehanna, added diversity to the borough industrial base. This rapid industrial expansion was reflected by a population growth of 72.5% between 1860 and 1870.

By 1870 Catasauqua was at the heart of the premier iron producing area in the United states. There were eight furnaces located across the Lehigh in Hockendauqua, six Lehigh Crane furnaces, and four more furnaces a short distance down river. The regional railroads and canal brought magnetite iron ore and anthracite coal to the furnaces and carried finished pig iron to markets. Two local railroads brought limonite iron ore from the central Lehigh Valley and provided reliable transportation between local mills. With rolling hills in Catasauqua and Allentown and a number of nearby limestone quarries, by 1870 the industrial concentration in the Catasauqua area was comparable to almost any industrial area in the world.

During the years of rapid industrial growth in Catasauqua, a residential area containing large, substantial structures developed in the central portion of the town. Much of this land was owned by David Thomas and, prior to 1860, accommodated few buildings. In 1856 Thomas built a large stone home in the vernacular Romanesque Revival style. (the structure was later rebuilt in the Queen Anne style). Located on Second Street near Pine and situated in a park like setting, the house dominated the immediate area and overlooked Thomas' furnaces. The same year that the Thomas house was built, the First Presbyterian Church of Catasauqua, a Gothic Revival style structure, was constructed across the street from the Thomas house. During Thomas' lifetime only a few other structures were built in the central part of town. All were large residences and all reflected the growing prosperity of the town. One of these structures was a substantial Queen Anne style home at 616 Second Street which was owned by Oliver Williams, one of the founders of Bryden Horse Shoe Works. Dr. James Hombeck built a fashionable brick Eastlake style home of Bridge Street in the 1870's. Two other noteworthy dwellings from the period were the Applegate house, built in the Italianate style, and the Greek Revival Fuller house, also on Bridge Street.

As the prominence of Catasauqua's iron industry began to ebb in the late nineteenth century, new local industries were developed. Perhaps the most important enterprises were, the silk mills that came to the borough. The Walmetah Mill began producing silk fabric in 1890 and by 1903 had 300 looms in operation. A decade later the company had 700 looms. In 1897, C.D. Dery Company located one of its fifteen mills in the borough and another mill, the Catasauqua Mill, was organized in 1911. The silk industry remained important to Catasauqua until after World War II. A local commercial district also developed in the late nineteenth century. Since the 1860's small shops had been locating along Front and Second Streets in the Biery's Port portion of town. By 1900 these small shops formed a healthy local retail industry. A few businesses, like F.W. Wint Company, a lumber mill begun in the 1870's, were able to expand their operations. With expanded onto the property previously owned by the Catasauqua Rolling Mills. Other new businesses included the Catasauqua Boiler Works, opened in 1901, the Leicester Rubber Company in 1913, and the Catasauqua Motor Car Works in 1914.

The late nineteenth and early twentieth centuries also saw much residential construction in the central portion of Catasauqua. After the death of David Thomas in 1882, his land became available for development. Already recognized as Catasauqua's most exclusive neighborhood, the area attracted many of the town's new entrepreneurs and factory operators Among the businessmen to build in the district was D.G. Dery. Dery came to Catasauqua in 1897 and within twenty years his business had expanded to include 40 additional mills with 10,000 employees and assets of almost $50 million. Built in 1910 in the Neo-Classical Revival style, Dery's mansion reflected its owners wealth. The three story house includes 48 rooms, an indoor swimming pool and is entirely surrounded by a terrace composed of imported Italian terra cotta tiles; "Though the Dery Mansion was the most important addition to the area there were a number of new structures that reinforced the prestige of the neighborhood. The more outstanding include a Colonial Revival style home built by James Thomas, the son of David Thomas, four impressive Queen Anne style dwellings, an Eastlake building and a Tudor Revival building. Other less opulent, but nevertheless, substantial homes also became part of the district during the period.

By the end of World War I most of the iron related mills in the Catasauqua area had closed. Catasauqua Casting Company and Catasauqua Boiler Company both closed in 1917. The Lehigh Fire Brick Company also shut down shortly after the war. Financial difficulties finally forced the two surviving iron companies in the area, Crane Iron in Catasauqua and Thomas Iron across the river in Hockendauqua to close. No longer were these small merchant furnaces able to compete with US Steel and other large steel corporations. Like the iron industry, some of the transportation systems that served Catasauqua did not survive the 1920's. The Lehigh Canal Company ceased operations as did two local and one regional railroad. Thus, by 1930 Catasauqua had become primarily a residential community.

In the years that followed much of the workers housing in Catasauqua experienced demolition or unsympathetic alterations. Fortunately few of the town's more prominent dwellings suffered similar fates. Today these residences remain as constant reminder of the wealth and opulence that the anthracite iron industry brought to the town during the last half of the nineteenth century and into the twentieth century.