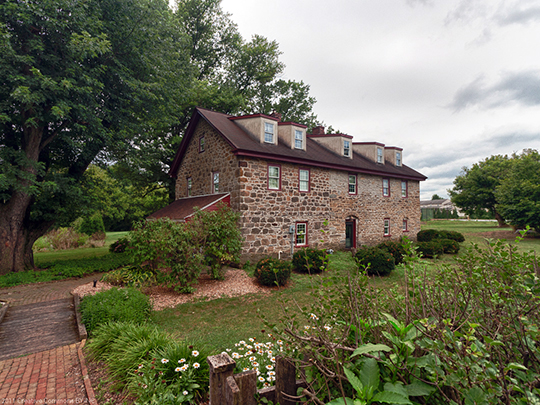 Lampeter Township, one of Lancaster County's original townships, was divided in 1841 into East and West Lampeter Townships by a line running almost from southeast to northwest. East Lampeter has long been known for its excellent farms. Its fertile limestone soil, well-watered by local creeks, early attracted settlers who were English, Welsh, German-speaking and Huguenots. The soil was of particular interest to the Amish farmers; their many descendants still carry on farming to this day. Crops by the late 19th-century included wheat, corn, potatoes and, to a large extent, tobacco. Dairying was also important. There were early mills and craftsmen in the area, later some small businesses and light industry. The township was described in 1883 in Ellis and Evans, History of Lancaster County, Pennsylvania: "East Lampeter is one of the most populous and wealthy townships in the County. It has not great beauty of landscape ... but for richness of soil and general good character of its people, it is unsurpassed by any other township in the County." [‡]