Photo: House on Camp Linden Road in the Trimbleville Historic District. Listed on the National Register of Historic Places in 1983. Photographed by User:Smallbones (own work), 2011, [cc-by-1.0 (creativecommons.org/publicdomain/zero/1.0/deed.en)], via Wikimedia Commons, accessed January, 2013. 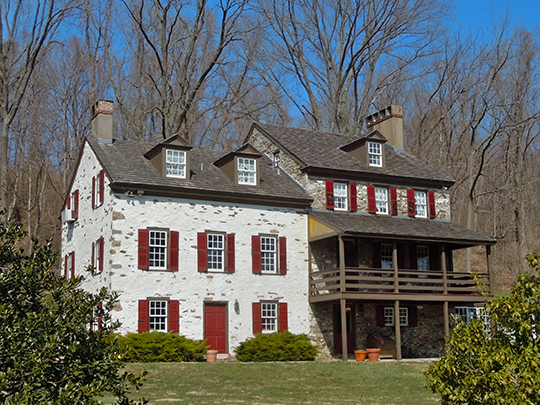 The Trimbleville Historic District was listed on the National Register of Historic Places in 1985. Portions of the content on this web page were adapted from a copy of the original nomination document. [1]

Trimbleville is a small hamlet located just above the forks of the Brandywine River on its West Branch. It includes land in the two Chester County townships of West Bradford and Pocopson. In addition to the Brandywine, which takes a large bend at Trimbleville, it is drained by Broad Run, a picturesque stream in West Bradford which empties into the river. Since 1740, a mill has been in place on Broad Run at this important junction. Approximately a mile upstream is the larger village of Northbrook where there was another mill. Marshallton is two miles to the north along the Strasburg Road.

Trimbleville sits in a broad valley formed by the two bodies of water. Much of the land is flood plain. Most of its buildings are poised on slopes just above the level plain, and look down upon the Brandywine River and Broad Run. Moderately steep hills rise behind them to a height of 250-300 feet and to a degree enclose the area.

There are six significant principal buildings in the Trimbleville Historic District and one intrusion. All six are high quality stone houses dating from the late 18th and early 19th centuries. They are typical, but excellent, examples of rural vernacular architecture from the Colonial to Federal periods. They reflect the plain tastes and conservative lifestyles of their Quaker builders, all of whom were related by blood or marriage. The farmsteads historically occupied large tracts (50-100 acres) of land, whereas the mill land and the blacksmith's property were situated on less than ten-acre tracts. The Trimble family, which established itself at this location on the Brandywine about 1750, eventually controlled most of the property in Trimbleville. The Miller's House also features a significant stone barn and a frame and stone mill. Adjacent to the Blacksmith's House is a restored wheelwright shop.

Trimbleville is a beautifully situated hamlet along the Brandywine's West Branch whose history mirrors major themes in Chester County's history: settlement and occupation by a Quaker family; a prosperous mill seat for nearly 200 years; a five-generation family farm; location of a distinguished school; and a role in the 1777 Battle of Brandywine. With its backdrop of hills, lush meadows, flowing waters, and handsome stone houses and farm complexes, Trimbleville is an outstanding example of a rural Chester County landscape.

Trimbleville's origins go back to a three-way partnership agreement for a grist and saw mill and 70 acres along the Brandywine. In 1744 William and Elizabeth Marshall sold this property to Robert Mendenhall and brothers William and James Trimble. In addition to its commercial potential, the property was the site of a fording place over the Brandywine's West Branch. The Trimbles had emigrated from Ireland, settled in Concord Township, and married sisters in the 1730's. James (1707-1792) and his wife settled along the Brandywine in 1738, transferred to the Bradford Meeting, bought a one-third interest in the mill there in 1744, and in 1751 purchased the other two shares. In 1758 James acquired 28 acres of adjoining land and by his death in 1792 owned 121 acres in three tracts. This land became the core of Trimbleville.

It was during James' tenure, on September 11, 1777, that Trimble's Ford, as it was known in the 18th century, was visited by more than 12,000 British troops advancing toward Chadds Ford under Generals Howe and Cornwallis. Trimble's Ford was the first crossing point on the Brandywine for this sizable army. That march concluded in the legendary Battle of Brandywine in Birmingham. Numerous reports of damages were filed by area residents, among them Francis Trimble (28 barrels of flour), Joel Baily, and James Marshall.

Isaac (1781-1859) seems to have improved and enlarged upon his family's holdings. It probably was he who built the elegant mansion house c.1820. In 1825 he acquired an adjoining farm of 50 acres from the estate of Robert Ingram. Isaac leased the mill to his son-in-law, Joel Woodward. According to an item in an 1856 newspaper, the old mill was torn down and a new one — four stories high — erected on the site.

Isaac left his property to his two sons, Jacob and John. John (1825-1901), who was born on the farm, settled at the homestead with his wife Anne (Matlack). Jacob and his wife, Celia, lived across the Brandywine in Pocopson and shared the milling business with John. The brothers leased the mill to various individuals, among them Alfred McFarland (c.1874) and W. H. Evans (c.1876). Much later, Jacob's only child, John F. Trimble (1862-1942), ran the mill for 17 years. After Jacob's death in 1877, John Trimble sold the mill property to H. N. Woodward, presumably a relative by marriage. In 1883 it was reported the grist and saw mill were totally destroyed by fire. The mill was rebuilt and a cider mill added in 1884. Ten years later John Trimble bought back the property as Sheriff's sale.

John's first-born son, William (1869-1943) was the fifth and last generation of the Trimble family to live at the homestead in Trimbleville. Like his ancestors he was a farmer and a miller and spent his entire life at the homestead. The mill tract, which had been split off from John Trimble's estate in 1902 and went through a succession of non-family ownerships, was returned to the homestead tract in 1936. William Trimble also bought the blacksmith property in 1909 and in 1929, sold off the Ingram house. He died in 1943 and his daughter, Anna T. Woodward, disposed of the family holdings in the 1950's.

Despite this, there has been minimal physical change in Trimbleville since. The former homestead still occupies over a hundred acres of rich land along the river; the mill tract is as William left it; and Trimbleville's other houses and buildings repose in a still rural setting.

Trimbleville was typical of rural hamlets in that it featured a blacksmith and wheelwright shop. Fortunately two principal buildings associated with this trade have been preserved. It appears that Robert Ingram (1761-1824) was Trimbleville's first blacksmith. Ingram was descended from a long line of blacksmiths. He may have settled in Trimbleville because of family connections to the Trimbles. In 1795 he purchased a 57-acre farm from John Carpenter, a farmer who had lived there since 1764. In 1798 Ingram was taxed for a 13' x 15' log blacksmith shop and a log and stone house. The next year he built a larger house (probably retaining the stone portion of the existing structure, making it all stone.) In 1824 it was advertised as a "good two story stone house with 4 rooms on a floor, 2 kitchens, one at each end, a pump of water in the yard ..." The property was purchased in 1825 by Isaac Trimble and stayed in that family for 104 years.

Robert Ingram split off the blacksmith shop from the main farm. By 1822 his son, Joseph, was advertising for sale "a stone dwelling house with a pump of excellent water near the door, a large stone smith shop, with three fireplaces, a large stone wheelwright shop, frame barn, with stabling...all new and in good repair." The 3 1/4 acre tract was purchased by Caleb Pennock, Jr. in 1822 and went through a number of ownerships until it was acquired by William M. Trimble in 1909. The property was described in that deed of sale as containing a "messuage, tenements, shops and land."

Despite its small size and rural location, Trimbleville was the location of an important private school run by one of Chester County's most distinguished teachers. Jonathan Gause (1786-1873) first came to West Bradford in 1807 to teach at a Friends school in Marshallton. In 1810 he married blacksmith Robert Ingram's daughter, Ann, and three years later was hired by the newly established West Chester Academy. After a few years, he left the Academy over a salary dispute and seems to have opened his own boarding school in Trimbleville. In 1820 he purchased a 54-acre farm from his father-in-law, who had acquired it in 1812 from the estate of Jacob Marshall via Elisha and Mary (Trimble) Ingram. Presumably Gause operated his first school on this farm. After 1820 Gause returned to the West Chester Academy, where he remained until 1829. In 1832 he moved the West Chester Boarding School to his farm in Trimbleville. By his time Gause had a strong following. The Greenwood Dell Boarding School was filled to capacity, despite Gause's enlargement of the existing farmhouse.

In 1839, Gause was hired as principal of the new Unionville Academy, a position he held until 1847. He then returned to Greenwood Dell and ran a boarding school there until 1865. About 1867 a huge reunion of the former student body, neighbors, and friends was held nearby in the meadow known as "Trimble's Bottom." Until his death in 1873, Jonathan Gause lived with only child, Mrs. Matthais Pennypacker, on an adjoining farm. He educated his grandson, Thomas, at Greenwood Dell. Gause's most famous pupil was Bayard Taylor, Chester County's eminent man of letters.

In 1925, the old Greenwood Dell School was purchased by the Society for Ethical Culture of Philadelphia. It was used for many years as a summer camp for underprivileged children from Philadelphia. The house served as the office and kitchen; bunkhouses were erected on the hill to the north, but out of sight.