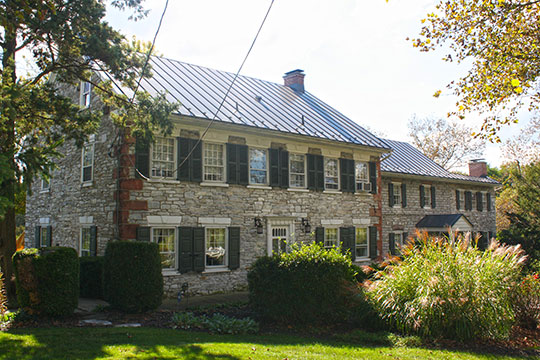 The Stouchsburg Historic District (12-153 Main Street) was listed on the National Register of Historic Places in 1985. Portions of the content on this web page were adapted from a copy of the original nomination document. [1]

Because so much of Stouchsburg remains intact, its development can be traced through the analysis of its buildings. Its oldest site, the Peter Spicker House, c. 1750, was part of a farm property in the Tulpehocken Settlement located on an early roadway. It is best known historically as a meeting site during the French and Indian War period, when Peter and his brother Benjamin, who lived across the road, helped organize a local militia unit and served under Conrad Weiser in attempting to protect their community from attack by the marauding Indians.

The Georgian wing of the Spicker House was probably built by Peter's son, Henry, c. 1800. In 1793, Henry sold the western section of his property, which was later divided into lots for "Stouchs' Town." These lots along the south side of Main Street were sold by Peter Shitz in the 1820's for gold and silver money. They measured 50' x 250' extending from the road to a rear alley, a pattern that has persisted to this day. Although a number of land transfers took place between 1793 and 1816, the only known building of that period was the Andrew Stouch Tavern, c.1808. Further development did not occur until the Berks and Dauphin Turnpike was completed in 1817. Between 1817 and 1825, twelve to fifteen buildings were erected.

A record of the early lot holders identifies them as innkeepers, merchants, farmers, drovers, wheelwrights, a blacksmith and a saddler. It seems likely that many of these tradespeople located here not only to serve the local farming community and the travellers along the turnpike, but also because of the opening of the Union Canal in 1827.

Undoubtedly, the canal commerce was a primary factor in the development of Stouchsburg. From a settlement of about 15 homes in 1830, it grew to a village of 86 properties in 1876. Grain, flour, lumber, gypsum, farm products, and local handcrafted goods were shipped to Reading and Philadelphia, while supplies for the town's merchants, businesses, and taverns were brought in return. Competition for the canal trade emerged when the Lebanon Valley Railroad constructed its tracks several miles south of Stouchsburg through Sheridan, Lebanon County in 1858. Although the canal was enlarged to meet this challenge, this effort was not successful in overcoming the advantage of rail transportation's speed and efficiency.

The development of a number of local cigar factories in 1870-80 provided the stimulus for continued village growth during that period. Prominent cigar makers included M. H. Smaltz, Adam S. Valentine, H. W. Cooper, and Reilly Zerbe. Some of these businessmen also operated large establishments in Womelsdorf. Smaltz, Cooper, and Zerbe built homes here. The cigar industry was the major local employer through the early 1900's.

Our building survey shows that the expansion of Stouchsburg ceased when the canal was abandoned in 1884. Since then, only four 1890's buildings were constructed: the church, parsonage, Reilly Zerbe house, and Cooper cigar factory. Three early 1900's properties were added: the fire hall, school, and one 1920's cottage. Later, six 1940-50's structures filled in the open space at the eastern end of town.

The architectural significance of Stouchsburg derives from its preservation of overall village design and its conservation of historic structure, rather than the examples of style it offers in individual buildings. Compared with the nearest linear towns along Route 422, Womelsdorf, Robesonia and Wernersville to the east, and Myerstown to the west, it seems to have been characterized by less progress, less wealth, less variety, and less change.

It symbolizes the tastes of the common man — the tradesperson, storekeeper, and factory worker of the 19th century. These people built sturdy houses with plain features not unlike the homes on the rural Pennsylvania German farmsteads of the same period. Behind their homes they built frame outbuildings. Because of the problem in obtaining water from dug wells in the porous limestone beneath the village, they collected rainwater in cisterns. This pattern is evident today.

The major difference between mid-19th century and mid-20th century Stouchsburg is the change from a somewhat self-sufficient community of tradespersons and shopkeepers to a residential village whose inhabitants work elsewhere. The buildings that formerly served as shops, inns, and cigar factories have been converted to single or multi-family dwellings. Interior modernization, the installation of plumbing, heating, closets and interior decoration have affected most buildings. Exterior maintenance has also seen a trend toward modern methods in application of aluminum siding and other so-called maintenance-free materials to many of the log and frame buildings traditionally covered with wood siding. Nevertheless, the total aspect of the village today is not unlike the postcard views of 1910.

Beneath the facades, the structure of each major building tells its own story of village growth. The nineteen log houses represent the beginning of the community during the 1820's and 1830's, the time when William Dieffenbach operated a tavern, Samuel Moore opened a general store, and Daniel Hackman worked in his Saddler's shop along the turnpike. During the late 1830's, Eli Klopp established a lumber yard along the Canal, obtaining logs and boards from several nearby sawmills along the Tulpehocken Creek. This had an impact on construction activity and methods. Between 1835 and 1850, nearly all houses were of frame construction. The 1850-70 period was the era of the most rapid growth, and brick was the favorite material. The Cherington brick yard was located just north of town. Samuel Keiser built a large general store, Dr. Newcomet constructed a fine home and office, and Isaac Moyer built the American House, the town's largest structure. The brick buildings at both the east and west ends of Stouchsburg date from this period. The 1870's brought a return to frame construction with the emergence of the cigar industry. This was the last trend in 19th century growth.

Stouchsburg is so solidly mid-19th century Pennsylvania German vernacular in character, that its later Queen Anne style house seems a novelty. It is so attuned to its past that our Village Survey group "remembered" as major events the dynamite factory explosion of 1884, the canal boat wreck of 1879, and the Tulpehocken Confusion, a Lutheran Church Controversy of 1734. It is so imbued with a conservation ethic that its church is built from the stones from canal locks, its water comes from cisterns, and most of its original buildings still stand. Through the years, Stouchsburg's residents have been satisfied with their traditional way of life. They have seen no need to change.