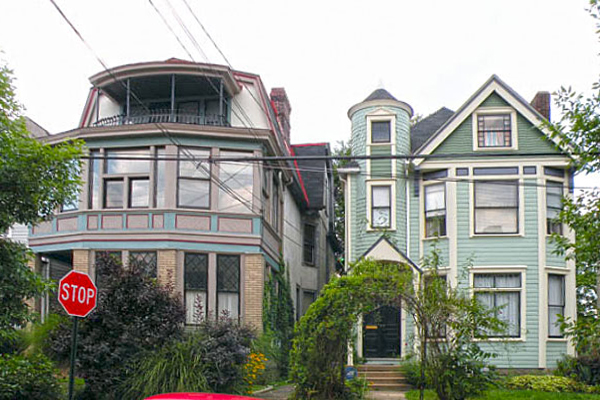 The Hamnett Historic District was listed on the National Register of Historic Places in 2010. Portions of the content of this web page were adapted from a copy of the original nomination document. [‡] Adaptation copyright © 2015, The Gombach Group.

The section of Wilkinsburg that includes the Hamnett Historic District was part of the landholdings of James Kelly in the period after the Civil War. After Kelly's bankruptcy in 1879, his property was subdivided for development. By 1886, all of the blocks north of Rebecca Avenue had been platted into building lots, but most of the section south of Rebecca was still held in large parcels by the Pittsburgh National Bank of Commerce (except for large lots owned by the Protestant Homes and by John Hamnett). These large parcels were finally subdivided by 1903, under the development pressure that was sweeping into Wilkinsburg as a whole at the time. The attractiveness of the district for development was enhanced greatly by the extensive infrastructure and other physical improvements built in Wilkinsburg after its incorporation as a borough in 1886.

The Hopkins map of 1903 shows that development in the Hamnett Historic District was mixed in character between owners who owned and held one lot and building only, and owners of adjacent or groups of lots and buildings. At that time, about two-thirds of the lots and buildings were owned individually, and probably corresponded to owners who invested in a building lot and directed the construction of a house for their own use. The other one-third of the properties appear to have been owned by speculators who purchased multiple lots and erected houses on them for sale or for rental (since mortgages were onerous and hard to obtain in those years, it was not uncommon for middle-class families to rent houses). For instance, along Jeanette Street in the James Callery Plan of Lots, T. R. Carboy owned five lots and houses in 1903. However, unlike in other sections of Pittsburgh that developed at the same time, there is little evidence of speculators buying up entire blocks and building identical buildings on those blocks. There are groups of two or three adjacent houses in the district that are identical, and evidently built at the same time for the same owner, but not whole or even half-blocks of houses.

The Hamnett Historic District assumed its current physical character by the first decade of the 20th century, as documented in the Hopkins Atlas of 1903. All of the current streets had been laid out, property had been subdivided into building lots, and most of the lots had been built upon. The only substantial group of vacant lots was around the intersection of Rebecca Avenue and Center Street, which would subsequently become a neighborhood shopping area. The architectural character of the district was established at this time as well. So much of the construction took place between 1890 and 1910 that all but two of the houses in the district were designed in one of the two predominant architectural styles of those years, the Queen Anne Style and the Colonial Revival Style. The Queen Anne Style is the quintessential Victorian style, asymmetrically composed and heavily ornamented; fine examples can be found at 709 Whitney Avenue and 421 Center Street. The Colonial Revival Style was more formal, composed, and symmetrical, utilizing Classical design precepts and ornamental features, as can be seen in the houses at 511 Jeanette Street and 716 Lamar Avenue.

Because of the density with which the Hamnett district was laid out, however, houses in these two dominant styles were actually quite similar in basic form. Houses built before 1900 were more likely to be of wood frame construction, and those built in the 20th century were more likely to be of brick, but almost all were two or two-and-one-half stories in height and three to four bays in width, with pitched roofs, ornamented roof eaves, dormers, and full-width front porches. The strong preference of Pittsburgh's—and Wilkinsburg's—middle class for single-family houses, combined with the desire of the district's original property owners and developers to maximize the return on their investments, led to the development of many streets of commodious, comfortable detached houses that were nevertheless spaced very closely together, and constrained by this spacing in their massing. Such tight spacing did not easily accommodate either a meandering, eccentric Queen Anne Style manse or a stolid, expansive Colonial Revival one. Rather, it constrained builders to a fairly simple foursquare structure, often taller than it was wide, with minimal projections except from the front. Because in many cases side yards were so narrow as not to afford visibility of side facades from the street, many buildings expressed their style primarily on their front facades, with few stylistic details on the sides and rear. This approach differed from that of wealthier neighborhoods, in which larger buildings on larger lots were designed, in many cases by architects, to be seen in the round. Though the houses in the Hamnett district are typically neither architect-designed nor high-style examples, they were constructed to display some high-style details, demonstrating their owners' and developers' awareness of contemporary architectural trends and desire to be associated with high architectural fashion. The houses also demonstrate the success with which local builders adapted the vocabulary of the nationally popular Queen Anne and Colonial Revival Styles to the constraints of local urban building lots and available materials -primarily brick and locally-milled, wood imparting the district's similarly-scaled and massed buildings with individual character.

A scattering of contemporaneous Classical Revival apartment buildings also stands in the district. Although precursors of an increasing density of development in Wilkinsburg Borough, these apartment buildings are consistent with the comfortable scale and stylistic character of the Hamnett Historic District. They are fine examples of the small, almost domestic scale, but stylishly-appointed apartment house typically found in Pittsburgh's early 20th century streetcar suburbs. At three stories, they are one story, at most, taller than neighboring single-family dwellings, while their formal Classical Revival detailing suggests aspirations to sophistication in urban living. These early 20th century apartment houses provided additional options in housing in the Hamnett district, broadening both the variety of the streets cape and the populace while extending the integrity of the district's stylistic qualities to another building type.

The houses of the Hamnett district were successful in another way. Closely built, behind front lawns and set on terraces, blocks of these houses formed public "outdoor rooms" along the streets, enclosed between their front walls, furnished with their rows of porches, and decorated with gardens and trees in the front yards. This public streetscape, with its now-mature trees, imparts a particular turn-of-the-20th-century residential character to the Hamnett Historic District as a whole along with the visual distinctiveness of the architecture of the houses and apartments. In other words, the effect of the whole equals more than the sum of its individual parts.

The onset of the Great Depression after the Crash of 1929 stopped construction in the Hamnett Historic district, thus marking the end of the district's period of significance. After the war, when construction resumed, the paucity of available building lots constrained the amount of building that could occur, and only two buildings exist that were built after 1930, severely limiting the effect of post-war construction on the visual character of the district.