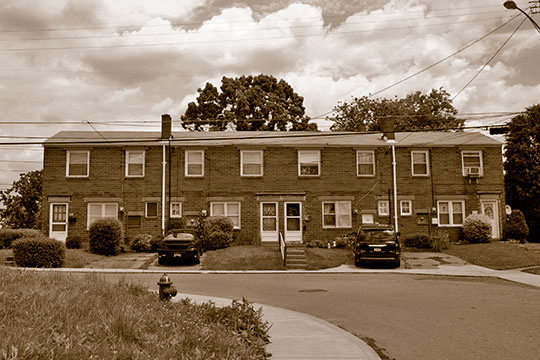 The Mooncrest Historic District was listed on the National Register of Historic Places in 2013. Portions of the content on this web page were adapted from a copy of the original nomination document [‡]

Mooncrest is a planned residential development built by the federal government for civilian workers essential to the United States' massive industrial mobilization during World War II. Originally consisting of 396 attached units in 106 modern red-brick buildings, Mooncrest's scale also allowed it to be built with its own community amenities, such as an elementary school, grocery store (excluded from the boundary due to a loss of integrity), and parks. Mooncrest is characterized by low-rise attached housing, curvilinear streets which afforded built-in traffic calming, separate footpaths for pedestrian circulation within the community, shared open space, a community-wide planting plan, and a self-contained site plan which effectively isolates Mooncrest from the otherwise sprawling suburban geography of Moon Township. All of these original features survive except for one residential building which was lost to fire in 2006; the community's original non-residential buildings also survive, though altered to accommodate new uses. Despite alterations to some individual buildings, Moon crest retains integrity of its original master-planned design, which conveys the approach of the federal government to solving the crisis of housing war workers during World War II.

Mooncrest's site, its plan, and its housing typology set it apart from the rest of Moon Township, which developed later during the post-war boom according to a typical suburban pattern. Mooncrest was built atop a steep bluff overlooking the Ohio River with streets laid out in seven interconnected loops accessed via a single entrance road from the Township's street system. Mooncrest's hilltop site and self-contained superblock plan provide sweeping views as well as safety from heavy or excessively fast vehicular traffic, and they promote a strong sense of internal community among neighborhood residents. However, these features have also historically served to emphasize the physical and social isolation of Mooncrest from the more affluent, traditionally suburban Township of Moon.

Mooncrest was built by the Allegheny County Housing Authority (ACHA) in 1943 as a form of non-income based public housing and owned by the Federal Public Housing Authority (FPHA) until 1958. It was the first housing development, public or private, in Moon Township, and its racial integration from day one meant that Moon, unlike many Pittsburgh-area suburbs, had an African American population well before federal fair housing laws prohibited discrimination in the private housing market some twenty years later. Moreover, Mooncrest's very design was entwined with the ideal of democracy. Built on an isolated bluff overlooking the Ohio River, with but a single access road, Mooncrest included 396 units of housing as well as its own grocery store, school, and parks, making it virtually a village unto itself. Its residents were expected to form a cohesive community, socializing with and relying upon one another in what was then a remote, largely rural area of Allegheny County. Unlike most World War II federal housing projects, Mooncrest was built to be permanent, and it was racially integrated both during the war and after its sale. As such, Mooncrest provided an important opportunity for moderate-income residents, including African Americans, to build wealth through access to employment and, later, home ownership.

Prior to World War II, Moon Township was a predominantly rural community with only a few scattered houses and farms. Although the construction of roadways and railroads—such as the Sewickley Bridge, which was originally constructed in 1911, and the Pennsylvania & Lake Erie Railroad—improved access between the township and downtown Pittsburgh, Moon would not develop as a suburban bedroom community until the postwar boom of the 1950s.

Moon's location emerged as strategic to the war effort as the United States mobilized for war in the early 1940s. The industrial infrastructure of Allegheny County converted rapidly to war production, and the massive build-up of the region's military capabilities created an acute need for civilian labor. In response, thousands of workers migrated to the area to take positions in the mills and factories. Moon Township's undeveloped acres were located in close proximity to busy steel mills in Aliquippa and Coraopolis and to the Dravo shipbuilding plant on Neville Island, making it a crucial location for war production. The provision of adequate nearby housing for defense-industry workers was considered essential to the war effort. The construction of Mooncrest therefore supported the mobilization of United States industry for World War II, an effort that ultimately contributed to the Allies' victory in that conflict

The federal government began as early as 1940 to address the housing shortage in Allegheny County and in other locations critical to wartime production. Although the United States was, at this point, officially still neutral in the crisis expanding throughout Europe, it was taking defensive precautions to ensure national security, as well as assisting friendly nations, such as Great Britain, that were already embroiled in conflict. In June, 1940, Congress passed the National Defense Bill and amended the United States Housing Act of 1937 to waive income requirements for public housing, thus opening public housing projects to defense workers, and to redirect remaining monies to housing those workers. Also in 1940, President Franklin D. Roosevelt created the Federal Works Agency (FWA) by consolidating several Depression-era New Deal agencies, including the Public Works Administration, the Public Buildings Administration, and the United States Housing Authority, and Congress assigned the FWA responsibility for alleviating housing shortages created by industrial workers and their families seeking employment in local defense plants.

Funding for the construction of defense housing was allocated through the National Defense Housing Act of 1940. Sometimes called the Lanham Act because it was introduced by Representative Fritz G. Lanham, the Act continued to provide funding for federally-built housing for war workers after 1942, when a reorganization of federal housing agencies transferred responsibility for the defense housing program from the FWA to the newly-created National Housing Agency (NHA). John B. Blandford was named administrator of the NHA. Within this agency, war housing programs were consolidated in a sub-agency, the Federal Public Housing Authority (FPHA), under Commissioner Herbert Emmerich. The names of these men and agencies appear on the plans for Mooncrest, drawn in the summer of 1942.

Between 1940 and 1945, Lanham Act funds built over 546,000 family dwellings, over 94,000 dormitory rooms, and over 74,000 trailers and other types of stopgap housing for defense workers at a cost of more than $2 billion. This massive investment in war worker housing was the United States' largest investment and experiment in public housing.