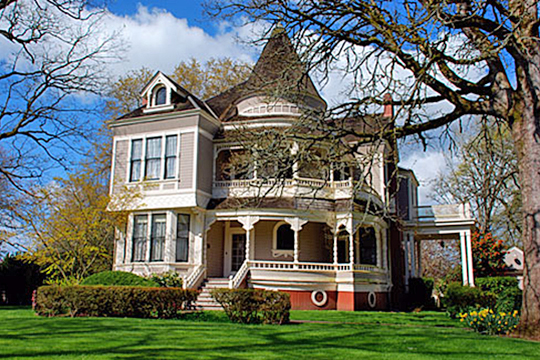 The town of Woodburn came to exist through the dreams of an early settler named Jesse Settlemier. A Woodburn Independent article 8-4-93 reflects the once and continued importance and influence of Jesse Settlemier.

The Settlemier family and 9-year-old Jesse came from Illinois along the Oregon Trail in 1849. The family carried with them fruit trees and seeds to plant in their new home, truly among the first horticultural pioneers to trek to Oregon. After many difficulties they arrived in Astoria, in early 1850.

Settlemier later moved to French Prairie, near Woodburn, in 1862. There he bought 214 acres for $5 per acre at a sheriff's sale and started a nursery. Woodburn Nursery's first sale of $1.60 was for some fruit trees.

His nursery continued to grow with a full line of fruit, shade, ornamental and nut trees; vines and plants from all over America and Europe. His clientele ranged east to the Mississippi, south to Mexico and throughout the entire West. The business increased year by year until Woodburn Nursery was the largest in the Northwest and very profitable.

In 1892 Settlemier turned over the nursery business to his son, Frank. He went on to become active in the state legislature, in business and in community of Woodburn.

It was at this period of time 1890 Jesse Settlemier built his bank and became president of same. In addition to constructing a solid, sturdy and safe looking building he lent his good name and strength of vision to Woodburn's first bank.

In February, 1889, eight years after the railroad was brought to Woodburn, the town incorporated as a city. Jesse Settlemier proudly took the position of mayor. His dreams of a busy town on his land were finally realized. It was an important shipping point for grain and lumber between Salem and Portland. A souvenir brochure of Woodburn from 1891 lists the town as having the following businesses: The Bank of Woodburn, two bakeries, billiard hall, a barber shop, a book store, two blacksmiths, a brick yard, a candy store, two commission merchants, a drug store, a drayman (cart maker), a dry goods store, a furniture store, a foundry, a grain dealer, three grocery stores, a harness shop, two hardware stores, three hotels, a jewelry shop, a job printing shop, two lawyers, three lumber yards, two meat markets, a livery stable, one newspaper, eight nurseries, (the largest belonging to Settlemier), a planing mill, a restaurant, five real estate offices, two shoe shops and one tin shop.

By 1908, the Woodburn area was already an important produce center. The crops at this time were hops, prunes, apples, plums, peaches, cherries, berries, walnuts, filberts and one enterprising farmer was experimenting with tobacco. The area was well on its way to earning its title "Worlds Greatest Berry Center".

In less than thirty years, Jesse Holland Settlemier had watched Woodburn grow from a dubious, shaky beginning to an important town.