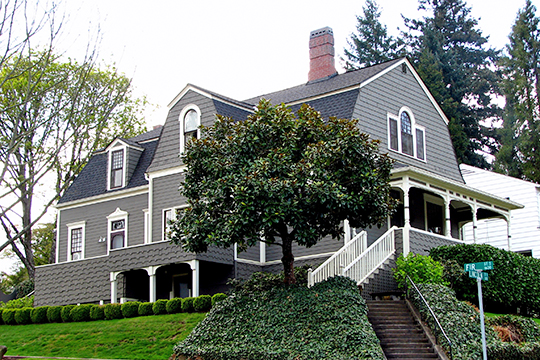 The Willamette River, rolling through forest and meadow, passes along the margin of the town. Westward, across a checkerboard pattern of farms and forest, rises the crest of the Eola Mountains. Farms, orchards, and vineyards cover the slopes of the Waldo Hills to the east, and beyond them the snow-capped Cascade Mountains form the horizon.

Salem's streets are unusually broad. Residences of modern design are half hidden behind trees that line the parkways and dot the lawns. There are no unsightly districts or slums. A landscaped area traversing the city serves as a civic center and embraces Willson Park, which is flanked on the west by the federal and county buildings and on the east by state offices. The shopping district, with its dignified structures, new and old, has an air of stability.

The city, county, and state business conducted in Salem tends to overshadow its industrial activities. The city is also the marketing and distributing center of a rich agricultural area on both sides of the Willamette. Approximately one-third of the fruits and vegetables of the Pacific Northwest are processed in Salem's canneries.

The daily bustle of a small city is intensified when the legislative session brings lawmakers, lobbyists, and political writers to town. Salem is then overcrowded and surcharged with an excitement that does not subside until adjournment.

Salem was founded by Jason Lee, who was sent from New England as the Methodist "Missionary to the Flatheads"; he arrived at Fort Vancouver, Hudson's Bay Company post, in the fall of 1834. Dr. John McLoughlin, the factor, whose real purpose was to confine American settlement to the area south of the Columbia River, advised Lee to avoid the more dangerous Flathead country and settle near French Prairie, where he would have protection, and where the land would lend itself to cultivation. Then he could gather the Indians around him, "teach them first to cultivate the ground and live more comfortably than they could do by hunting, and as they do this, teach them religion."

Lee's first mission was not a success because the "great sickness" wiped out about four-fifths of the Indians in this section; he began another, on the more healthful site of Salem, on June I, 1840. The missionaries erected a house and combined sawmill and gristmill on this property, and continued their efforts toward education and conversion of the Indians. Becoming discouraged in these efforts, and not anticipating much success from another eastern trip to raise funds, the missionaries decided to lay out a town and sell lots to finance the Oregon Institute, a "literary and Religious Institution of learning," which turned its emphasis to schooling of white children following the great emigration of 1845. Oregon Institute was the forerunner of Willamette University, which was chartered in 1853.

The town was laid out the following year, and the first lots sold were purchased with wheat. In choosing a name for the "town," which had one house when it was platted, the Calapooya Indian name Chemeketa, or "place of rest," was proposed, but the missionary brethren preferred a Biblical word, Salem, with a similar meaning.

Growth of Salem was slow in the 1840s, and discovery of gold in California at the end of the decade drew nearly half the population to the Mother Lode country. A few prospered and brought their new wealth back to Salem, where it contributed to the development of the town.

The territorial legislature, meeting at Oregon City in 1851, chose Salem as the territorial capital. Democratic members, supported by the missionary influence, were apparently instrumental in this move. The Oregon Statesman, edited by Asahel Bush, strongly supported the move to Salem, and Thomas J. Dryer, editor of the Whig Oregonian, took the opposite side. When the time came for the meeting in Salem, in December of that year, the governor, two members of the territorial supreme court, and a minority of the legislature refused to move from Oregon City, stating that the act was unconstitutional because it contained two unrelated items, contrary to the organic law. A writer to the Statesman advanced "the probability that party spirit, to sustain the Governor, had something to do with this strange course of proceeding."

Bush was more forthright; he called the dissidents "a squad of federal nullifiers" and "lickspittles and toadies of official whiggery."

Accommodations were none too good for the legislators, their first session being held in the residence of J. W. Nesinith. In 1852 "there were perhaps a half dozen families living in Salem. The store was owned by John D. Boon. . . . The mission building and mill were standing." The following year Asahel Bush, who had been appointed territorial printer, moved his newspaper to Salem. The legislature, dissatisfied with unfinished buildings and cramped quarters, voted to move the capital to Corvallis in 1855. They traveled on the steamer Canemah, and Asahel Bush, in his dual guise as territorial printer and newspaper editor, took his much-traveled printing equipment along. However, Congress had appropriated money for erection of a capitol and other public buildings at Salem, and the Comptroller of the U. S. Treasury refused to recognize the bill moving the capital. The legislators then re-embarked from Corvallis following one session there, and came back to Salem. Late that year the capitol was burned, supposedly by an incendiary. Thereafter the legislature met in rented buildings until a new one could be constructed. When Oregon was admitted to the union as a state in 1859, Salem continued as state capital.

During the 1850s Salem had connections with other valley points by river steamer, stage line, and telegraph, and seemed well on its way to an era of prosperity. Hopes were shattered, however, by the disastrous flood in December, 1861. The Willamette, swollen by heavy and prolonged rains, surged over the business district, destroying wharves, saw-mills, stores, and residences. Not until 1871, with the coming of the railroad, did a new period of rapid development begin.

During the Hayes-Tilden presidential election of 1876, Governor LaFayette Grover (1823-1911) made a daring political move which, says the Dictionary of American Biography, "If it had succeeded, would have elected Tilden president." Governor Grover attempted to disqualify a Republican elector, a postmaster, on the grounds that he could not act because he held public office, and to replace him with a democrat, next highest on the list. He prepared an extended brief to support his position, but the electoral commission ruled against him. The Governor was threatened with mob violence as a result of this action, and when he resigned the governor's chair the following year to enter the U. S. Senate there was an unsuccessful attempt to prevent his being seated. As editor of the Oregon Archives and as a public official in several capacities Grover otherwise served with credit; for a number of years he was a prominent woolen manufacturer in Salem, but spent the latter years of his long life in retirement.