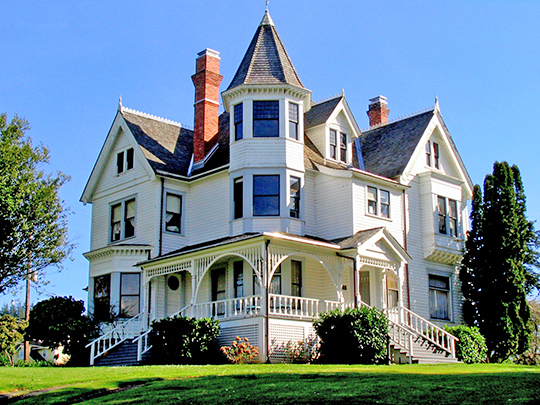 The Andrew Jackson Sherwood House was listed on the National Register of Historic Places in 1992. Portions of the content on this web page were adapted from a copy of the original nomination document. [‡]

The Sherwood House (257 East Main Street, Coquille, OR) is a highly significant example of the Victorian Queen Anne style. It is particularly noteworthy in the overall complexity of its massing and the profusion of decorative elements such as bargeboards, oriel windows with elegant consoles, spindlework, polygonal bays, and handsome corbelled chimney caps. The architectural details are enhanced by the home's setting on a large lot adorned with ornamental plantings and curvilinear paths among a grove of mature Myrtle trees. The narrow drive encircling the house was probably constructed for horse-drawn carriages. An iron hitching post is located adjacent to the drive at the main entrance.

The house was constructed for Mr. and Mrs. Andrew Jackson Sherwood. A.J. Sherwood was a prominent early citizen of Coquille. He was born in Iowa in 1858 and came to Coos County in 1883. Two years later he married Cynthia Rogers, daughter of Mr. and Mrs. Stephen Rogers of Coos River. The couple had five daughters: Claire, Emma, Grechen, Helen and Delia. Sherwood, a graduate of the University of Iowa, taught school for a short time after his arrival. He also served as county school superintendent from 1886 to 1888 and opened a law practice shortly afterward. He was one of the organizers of the First National Bank of Coquille, established in 1903, later serving as president of the bank until his death in 1929. Cynthia Sherwood died in 1950. The house was still owned by Sherwood family members at the time it was placed on the National Register (1992).

The house was designed by the Knoxville firm of George F. Barber.