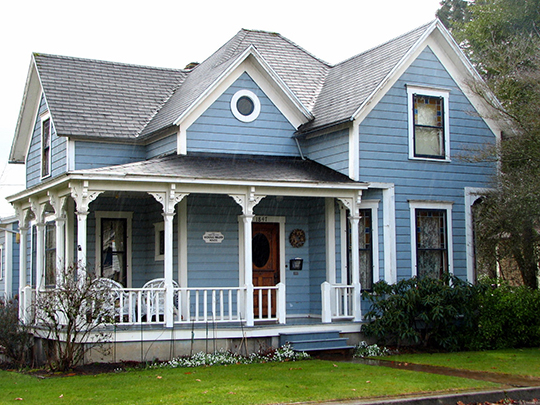 The Willamette Falls Neighborhood Historic District was listed on the National Register of Historic Places in 2009. Portions of the content on this web page were adapted from a copy of the original nomination document. [‡]

The Willamette Falls Neighborhood Historic District is a single-family residential area located in West Linn, Clackamas County, Oregon approximately two miles upriver from Willamette Falls on the west side of the river. The district encompasses 15.4 acres and 64 primarily one- and two-story wood-frame residences in the Stick, Queen Anne, Craftsman, Colonial Revival, and later styles constructed between 1895 and the present. Many residences have garages or other secondary structures. Streets are laid in a regular rectilinear pattern, although street and sidewalk widths and treatments vary. Landscaping consists of ornamental lawns and foundation plantings. Mature trees and shrubs throughout the district convey the sense of a well-established neighborhood. In many cases properties surrounding the area are part of the original town plat, these areas were not nominated as part of the district due to a lack of physical integrity or because they were developed later.

There are two primary groups of resources in the Willamette Falls Neighborhood Historic District, those from the late Victorian era and those representing the early-twentieth century American era. The district is especially significant for its concentration of intact Victorian-period residential architecture in the Stick and Queen Anne styles, which represent 20 resources in the district. Many of these buildings are simplified designs intended to imitate the high-style examples of the period. As was typical at the time, design elements of the Stick and Queen Anne styles are often combined on the same building. There are 26 examples of early twentieth Century American-era styles in the district. These include 23 examples of the Bungalow type in front and side-gable arrangements, generally with Craftsman details. The Colonial Revival style is the second-most popular twentieth-century style with three examples.

The importance of Willamette Falls as a potential trade and manufacturing center was instantly recognized by early settlers. Towns both above and below the Falls grew rapidly as key trade centers moving goods around the natural barrier to connect the farms of the Willamette Valley with the Pacific Ocean. As early as 1887, the river's rushing waters were used to produce a number of industrial products, most notably paper. In 1890, water power generated the electricity for the first long-distance electrical transmission. The area's bustling trade and manufacturing sectors led to active land speculation and created fast-growing communities along both sides of the river. Platted by the Willamette Falls Company in 1893, Willamette Falls was one of these speculative towns. Designed by Nicholas O. Walden, businessman and real estate speculator, the ambitious plan for the town called for underground utilities, including water and sewer systems, and electricity supplied by the company. Future improvements included a rail line and port facilities along the river. The company hoped that the town's close proximity to the Falls and desirable amenities would drive demand for lots and make the town a important manufacturing and shipping center. Soon after its founding, the town boasted a number of fine homes, a small bustling downtown, and a modern shoe factory. Despite a promising start, the community never met its developer's expectations and instead matured into a small mill town that grew slowly through the 1920s.

The Willamette Falls Neighborhood Historic District includes the portion of the original Willamette Falls plat that still retains the physical characteristics of the original town design and that contains the greatest concentration of contributing resources. Willamette Falls, like other communities around the Falls, grew as a direct result of the industrial boom in the area in the late nineteenth and early-twentieth centuries. Of the many remnant towns within West Linn, Willamette Falls was the largest and most developed, possessing a distinct character that is still evident. The Willamette Falls Neighborhood is the best representation of this former town, encompassing the area of initial residential development and still retaining the character of the original plat. The district contains a cohesive collection of intact late-nineteenth and early-twentieth century residences dating to the district's time of development. The period of significance spans from construction of the first residence in the district in 1895 through 1929, when building of new homes waned. While the community of Willamette Falls never developed into the manufacturing center its founders hoped for, the initial development of the community directed its growth as a small independent town.